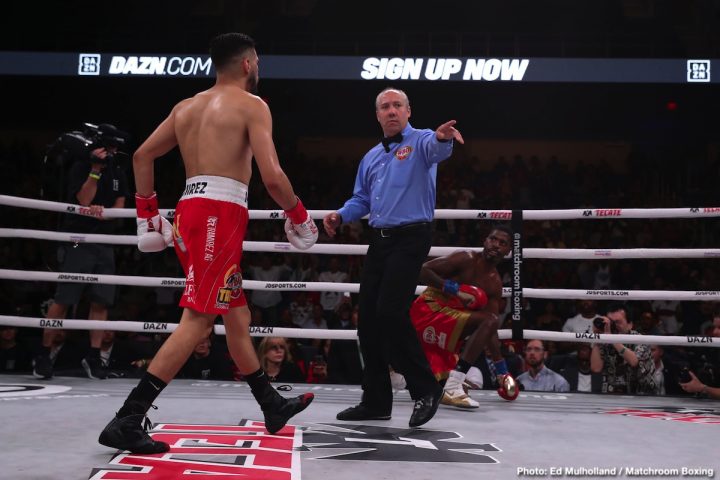 Ramirez, 26. hurt Hooker with a big left hook in the sixth round that caused him to back straight up to the ropes. From there, Ramirez continued to hit the defenseless Hooker with shots to the head until the fight was halted by the referee Mark Nelson. The time of the stoppage was at 1:48 of round six.

Earlier in the contest, Ramirez was given credit for a knockdown when he stepped on Hooker’s foot, and then hit him with a shot that caused him to stumble and fall.

Hooker fought well at times when he was in the center of the ring, hitting Ramirez with right hands and left hooks. Where rail-thin 5’11” Hooker had problems is when he would get bulled to the ropes by the shorter, stockier 5’10” Ramirez.

With the win, Ramirez said after the fight that he wants to face the winner of the final of World Boxing Super Series light welterweight tournament between WBA champion Regis Prograis and IBF champ Josh Taylor. Those guys will be a lot harder for Ramirez to beat, because they’re not flawed fighters like Hooker, who arguably should have had three losses on his record going into tonight’s fight.

Prograis will likely be the one that emerges as the winner of the WBSS tournament, and he’ll be a real problem for Ramirez. Prograis has too much power, boxing skills and defensive ability for Ramirez. This is a fight that should have taken place two years ago, but Ramirez’s promoters at Top Rank Boxing haven’t been in a hurry to make it.

The victory for Farmer was his fifth successful title defense of his IBF belt that he won in 2017. Farmer, 28, still hasn’t faced anyone dangerous since winning the IBF belt. His management has been matching carefully, and tonight’s fight against little known Frenois was no exception. It was another easy defense against an unknown.

Farmer did a good job making the 35-year-old Frenois miss with his shots the entire fight, and keeping him in a helpless state. It wasn’t an exciting fight to watch, but Farmer did his job in beating Frenois.

The way Farmer looked tonight, it wouldn’t be a good idea for him to take on WBA champion Gervonta Davis anytime soon. That’s a bad match-up for Farmer. The power isn’t there for Farmer, and he likely wouldn’t last long against Gervonta.

Oleksandr Usyk vs. Carlos Takam on October 12/19 in Chicago, Illinois »