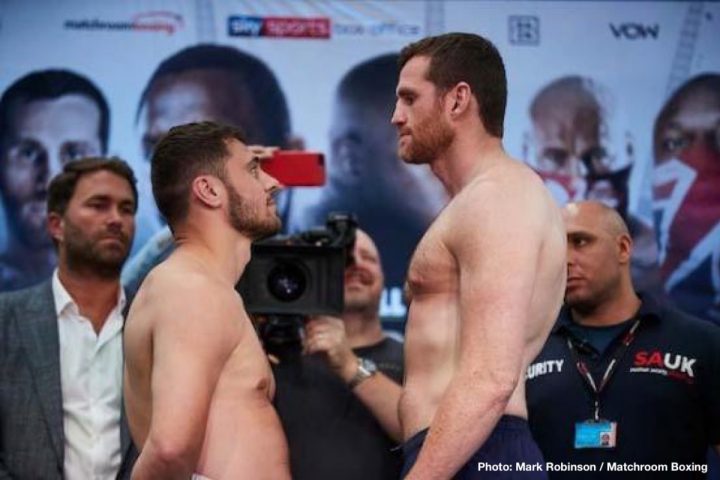 By Barry Holbrook: David Price weighed in at 257 pounds on Friday for his 12 round fight against a highly motivated Dave Allen their fight on Saturday night at the O2 Arena in London, England. Allen (17-4-2, 14 KOs) weighed in at 241 1/4 pounds, and looked in good shape. Price and Allen will be fighting on the undercard of Dillian Whyte vs. Oscar Rivas on Sky Box Office PPV in the UK, and on DAZN in the U.S.

Price, 6’8″, towered over the much shorter 6’3″ Allen during the face off between. Allen looked sheepish and out of place when he was standing next to Price. If this fight had taken place during the height of Price’s career between 2010 and 2012, Allen wouldn’t be given any chance at all of winning. Back then, Price was mowing down almost everyone he faced. Things have changed for Price since his two defeats to Tony Thompson in 2013. Price’s punch resistance, stamina and self confidence has abandoned him entirely.

Price (24-6, 19 KOs) is up against it in this fight. He’s the older guy at 36-years-old compared to the 27-year-old Allen and he’s running out of chances. Price wants to get in position for a world title shot against one of the heavyweight champions.

“It’s a chance to get bigger fights,” said Price about his match against Allen. “Style-wise, I’ll be able to get my shots off well, and when I do, I’ll do damage. I don’t like social media. I’d rather someone be in front of me,” said Price in revealing that he doesn’t care for the trash talking.

Price has the capability of making this an easy fight with his size, power, boxing ability and pedigree. But he gets nervous when his opponents start hitting him back, and he quickly gasses out. Price’s knockouts are more a product of his poor stamina than anything else. If Price can stay relaxed inside the ring on Saturday night, he’ll have a great chance of winning the fight. In the build up to the fight, Price has seemed more relaxed than he has in ages. It’s unclear whether that’s because he’s facing a domestic level fighter in Allen or if he’s finally conquered his stamina problems.

Price could have beaten the majority of the guys he lost to in the past if he hadn’t tightened up, and fallen apart. There wasn’t much Price could do in his first loss to Tony Thompson in 2013, because he got hit behind the ear with a hook, and that put him down. Price couldn’t regain his feet after that shot. But his stoppage losses to Thompson in their second fight, and his defeats to Erkan Teper, Christian Hammer, Sergey Kuzmin and Alexander Povetkin were all winnable fights for him.

Price fights better when his weight is down

Price’s weight is good at 257 pounds, but that still doesn’t mean he’ll win. He’s been lower than 257 lbs. in the past, and still lost. Here are Price’s weights for his past defeats:

As you can see, Price’s weight being lower isn’t a guarantee of success. He obviously fights better when his weight is lower, but he still winds up getting knocked out from time to time. Price weighed 258 pounds for his fight against journeyman Kamil Sokolowski in 2017. Sokolowski is similar to Allen in terms of talent, and Price did a good job of negating his powerful left hook to win an easy eight round points decision.

Allen’s strong chin, and powerful punch will lead him to victory on Saturday. This writer sees Allen stopping Price in the fifth round. Price’s best chance of winning is by going out and blitzing Allen early like he did in his Matt Skelton in 2012. Unfortunately, Price doesn’t fight like that anymore. He doesn’t empty his gas tank going for knockouts like he used to, but that’s what he’ll need to do for him to beat Allen.