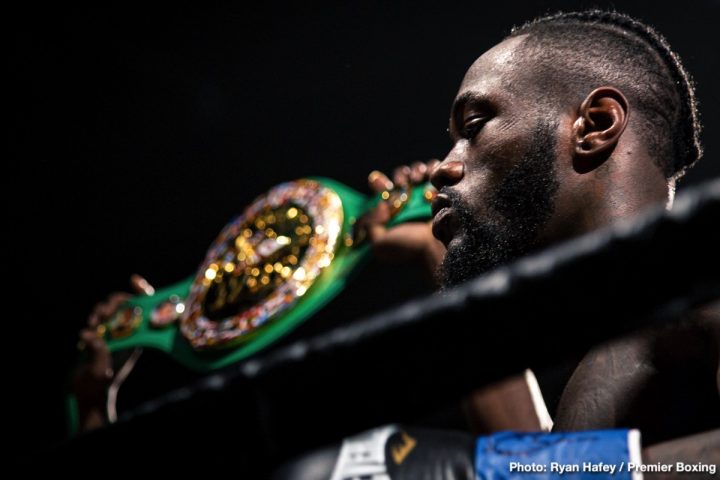 Wilder offered Whyte a fight if he first beat Luis Ortiz, but he chose not to fight the Cuban talent. When the World Boxing Council then mandated the Whyte-Ortiz fight as a heavyweight title eliminator, Whyte still didn’t take the fight. Although Whyte has been ranked at #1 wth the WBC title for the past two years, he didn’t an eliminator. When they tried to get Whyte to fight Ortiz last year, he chose to face Dereck Chisora and Joseph Parker instead.

With that being said, Wilder (41-0-1, 40 KOs) says he’ll eventually give him a world title shot if he keeps winning.

“It’s just sad, a grown man lurking and hiding in the bushes, that’s what he does,” said Wilder to 78SPORTSTV in talking about Whyte constantly talking about wanting a fight against him. “He’s just peeping his head out of the bushes to see what I’m doing, and to see where I’m gong next, talking about how he wants to fight me. He do not want to fight me. I know who wants to fight me, and who don’t. He tries to act hard. I know the real ones. He can get on social media and stalk me and harass me. I appreciate the publicity. I appreciate him for keeping my name alive, but he’s had multiple opportunities to fight me,” said Wilder.

“He didn’t take any of the opportunities placed before him,” said Wilder. “Dillian Whyte is one of the easiest styles ever. People say I’m wild, but he’s definitely wild. If I’m wild, I’ve mastered my skills of being wild. For anybody else to try and come in wild with me, they ain’t going to last. He’s going to get knocked out real early if that fight ever happens,” said Wilder.

“Then he had [Luis] Ortiz. I said, ‘go fight Ortiz.’ He didn’t want to fight Ortiz, when I gave him my word,” said Wilder about Whyte. “He wants to call him an old man. If he’s old, that’s an easy chance. ‘If you beat Ortiz, you got me,’ I told him that. Then the WBC comes around and mandated it. They ordered him [Whyte] to do it.  What he did was he still declined [the Ortiz fight]. The dude had so many opportunities. He just didn’t want to do it. Whyte does not want to fight. He just wants to talk, and who keeps up with the days,” said Wilder in commenting on how Whyte has been counting the days he’s been ranked #1 with the World Boxing Council.

What’s interesting is Whyte has called Ortiz an old man, and yet he’s not done the same thing in his recent fights last year against 40-year-old Lucas ‘Big Daddy’ Browne, and 35-year-old Dereck Chisora. Those are both older fighter, but Whyte didn’t talk abut their age.

Wilder: Whyte has counted 600 days like he’s in prison

“‘It’s been 600 days,'” said Wilder in imitating Whyte with his complaining about being ranked #1 for ages without being made the mandatory challenger. “Get the f–k out of here, like you’ve been in prison, and you’re striking the walls. ‘I’m 750 days.’ I’m levels above these guys. I’m ready to fight these guys again. That was a great fight. Nobody wants to fight him. They just want to call him old. I don’t understand. Beat his old as-, and then move on. That’s what I want to see from these guys. Stop talking so much, and do what you’ve got to do,” Wilder said.

Whyte and his promoter Eddie Hearn don’t realize the difference between being ranked #1 and being the mandatory challenger. They’re not necessarily the same thing. Just being ranked #1 by a sanctioning body doesn’t make a fighter a mandatory challenger. In order to be a mandatory, a fighter needs to take part in an official eliminator. Whyte skipped the eliminator when the WBC ordered him to fight Luis Ortiz last year. He should have taken the fight because he would have already been made the mandatory for Wilder.

“I don’t know too much about Oscar Rivas,” said Wilder about Whyte’s opponent Rivas for July 20. “He likes to throw a lot of power punches when he fights. Hopefully, he comes and gives a great fight. I heard they’re having a hard time selling this fight as well. He’s [Whyte] focusing on me instead of his own life,” said Wilder.

Wilder says he’ll give Whyte a title shot if he keeps putting wins behind him. Whyte’s promoter Eddie Hearn is counting on that happening a lot sooner than Wilder thinks, because he’s been pushing the WBC to order the winner of next week’s Whyte-Rivas winner to be a final eliminator.

Whyte better be ready when the time comes says Wilder

“When the time comes, he better be ready, because you’re going to get what you want,” said Wilder. “It won’t be long, man. He keeps calling me out just like all the other ones that called me out. Dillian Whyte, I want you to listen to me. If you continue to win, trust me, you don’t have to worry about coming to me. I’m going to come to you. I’m going to pull your card. You aren’t in the position to call my card. You can’t even open my card. When I do pull your card, I want you to be ready, bro, because it’s going to be life and death, bro,” said Wilder.

Whyte will likely get a title shot against Wilder if he wins his next fight against Rivas.


« Sergey Kovalev vs Anthony Yarde OFFICIAL for August 24 in Russia