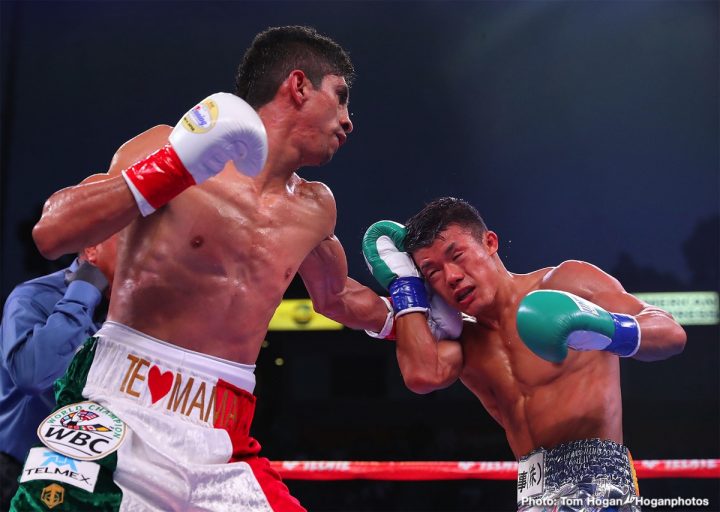 By Mark Eisner: In a competitive affair, Rey Vargas beat back the threat of challenger Tomoki Kameda in winning a 12 round unanimous decision to retain his WBC super bantamweight title last Saturday night on DAZN at the Dignity Health Sports Park in Carson, California.

It was a close fight from start to finish, but Vargas showed that he was the better man. Kameda (36-3, 20 KOs) fought aggressively in the last half of the contest, roughing up the unbeaten Vargas (34-0, 22 KOs) when in close in using his head, and hitting on the break. The referee penalized Kameda one point in the 12th round for hitting on the break. That was a costly mental mistake on Kameda’s part.

Too much size for Vargas

Those roughhouse tactics weren’t going to make up for the superior size and talent of the 5’10 1/2″ Vargas. Kameda, 5’7″, lacked the size to compete with Vargas when he was on the outside, and he was eating too many jabs.

“The idea was to throw a lot of punches and to have a very intelligent fight,” said Rey Vargas. “I believe that we made this a very smart fight, an intelligent one. This is a boxer’s style, to fight with precision. I believe that he brought a lot of fans from Japan and that’s why they don’t agree with the decision. He mentioned before that he has all the experience. I knew that Kameda was going to push but again, we did a very, very smart fight.”

Vargas wasn’t hitting Kameda with shots that were anymore powerful than his. but it was the sheer number of shots that he threw. Kameda had to walk through a storm of shots each time for him to get near enough for him to land his blazing fast left hooks and right hands.

In rounds 9 through 12, Vargas threw combination punches to the head and body when Kameda would come forward. Mixing the punches to the body gave Vargas a huge edge, because Kameda’s head movement didn’t help him with the shots downstairs. Vargas landed a lot of left hooks to the liver that backed Kameda off. Those punches gave Kameda something to think about. He did a good job of disguising being hurt by Vargas’ body shots, but it was obvious they were bothering him.

Vargas didn’t always throw to the body in the championship rounds, but when he did, he backed Kameda off of him. The challenger didn’t like getting hit with Vargas’ shots to the midsection. the left hands to the body from Vargas were thrown with perfect form. Kameda had never fought anyone with that kind of ability to throw to the body that Vargas showed.

“I want to fight Danny Roman. We need to unify titles, why not? I want all three titles,” said Vargas. “Danny, we are ready. I am ready whenever you want to fight. You know when a Mexican fight another Mexican, it’s a war.”

Leo Santa Cruz is also an option for Vargas to fight if he’s willing to go up to featherweight to challenge him for his WBA title. That would be a huge fight for Vargas. Roman is an excellent fighter as well, but he’s not as well known with the casual boxing fans as Santa Cruz.

Other results on the card 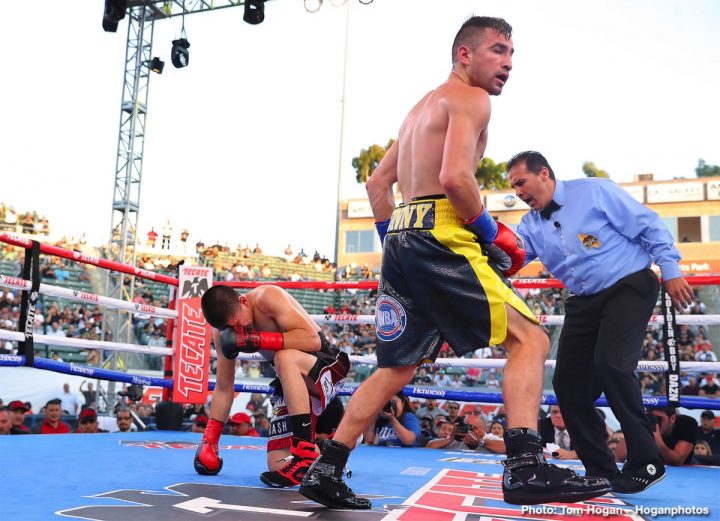 Super bantamweight Ronny Rios (31-3, 15 KOs) pulled off a shocking upset in beating the previously undefeated Diego De La Hoya (21-1, 10 KOs) by a sixth round TKO to win the NABF and WBA Gold 122 pound title. The fight was stopped at 1:17 of round six.

De La Hoya made the mistake of getting into a war with the talented and dangerous Rios. Through the first five rounds of the contest, De La Hoya held his own in fighting Rios to a standstill, but by the sixth round he looked depleted. Rios nailed De La Hoya with a booming right uppercut that shook him to his boots, sending him down. De La Hoya got back to his feet, but the referee halted it at that point. Diego didn’t want anymore.

It’ll be interesting to see if De La Hoya opts for a rematch. If so, he’s going to need to box more and slug less, because he’s not a rugged enough fighter to go to war with a veteran like Rios and win in that manner. 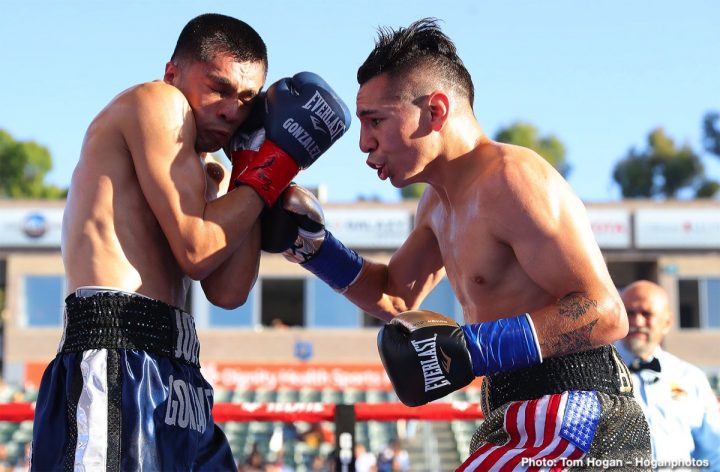 Unbeaten featherweight Joet Gonzalez (23-0, 14 KOs) beat a tough Manuel Avila (23-2-1, 8 KOs) by an eighth round TKO to win the WBO Global and WBA Continental American 126 pound titles.  The fight was stopped at 2:27 of round eight.  Gonzalez unloaded on Avila with a storm of shots in the eighth that led to the stoppage. After the fight, Gonzalez made it clear that he wants Shakur Stevenson or Joseph Diaz next.

“Shakur Stevenson and JoJo Diaz. All I do is box, all they do is like to run their mouth on social media,” said Gonzalez after the fight.

Those would be good fights for Gonzalez if his management can arrange them. Gonzalez would have an excellent chance of beating Diaz. Beating Stevenson, 21, is another thing altogether. That’ll be a hard fight for Gonzalez, because Shakur is looking outstanding right now. 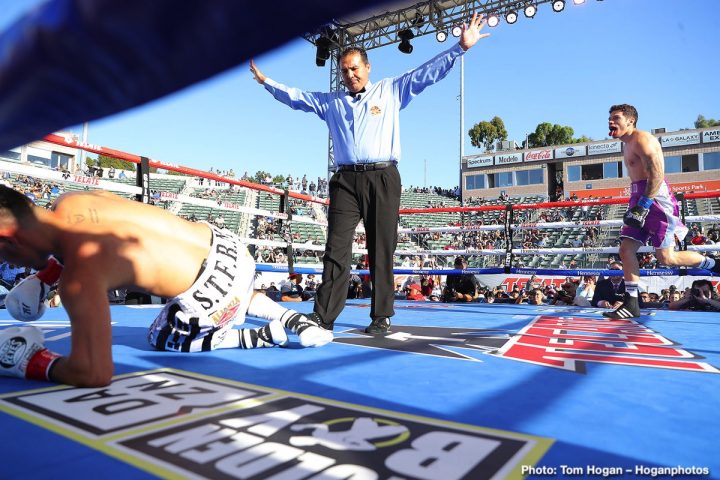 In a big upset, super featherweight Roger Gutierrez (22-3-1, 19 KOs) defeated #3 WBC Eduardo ‘Rocky’ Hernandez (28-1, 25 KOs) by a first round knockout. Gutierrez, 24, caught Hernandez with a perfect right hand shot in close that sent him down on the canvas. There was no way for Hernandez to recover from that punch, as he couldn’t get back to his feet without stumbling repeatedly. Hernandez was badly hurt. The referee Rudy Barragan halted the fight on the spot. The time of the stoppage was at 2:39 of round one.

“I came in here to rip his head off and that’s what you saw,” said Gutierrez about Hernandez. “Yes, of course I felt I could win.  The era of Roger Gutierrez has begun.”

Hernandez’s promoters need to decide whether to arrange a rematch with Gutierrez for him to avenge this defeat. This wasn’t supposed to happen. Hernandez needs to avenge this loss.