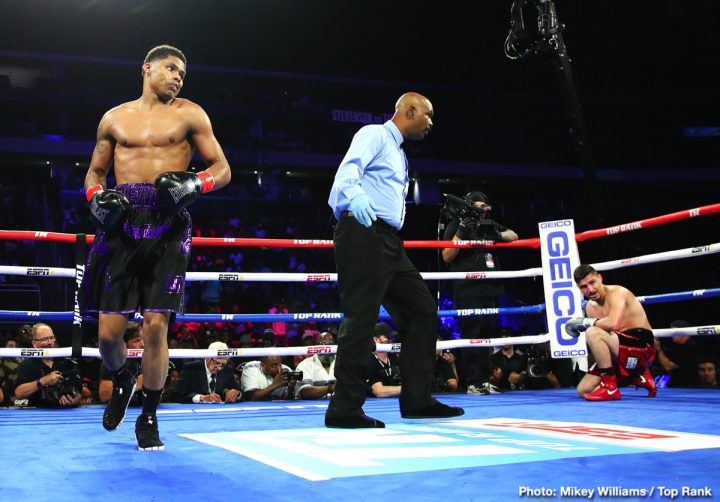 By Sean Jones: Highly ranked featherweight contender Shakur Stevenson blew out a horribly over-matched Alberto Guevara in stopping him in the third round last Saturday night on Top Rank Boxing on ESPN at the Prudential Center in Newark, New Jersey.

Stevenson (12-0, 7 KOs) came close to stopping 28-year-old Guevara (27-5, 12 KOs) in the second round after knocking him down twice. If not for the bell sounding, Guevara would have been knocked out. The win for Stevenson could lead to a title shot for him against IBF featherweight champion Josh Warrington, who he called out after the contest.

Guevara was a replacement opponent

The original opponent for Stevenson was supposed to have been Hairon Socarras (22-0-3, 13 KOs), but he couldn’t take the fight. knockout artist Franklin Manzanilla (18-5, 17 KOs) was then picked to face Stevenson, but he pulled out with an illness. Top Rank then found Guevara to step in to face Stevenson. It might have been better had they canceled the entire show, and waited until they found a quality opponent for Stevenson to face. However, with tickets sold for the event, they choose to find a replacement for Stevenson to face.  Stevenson vs. Manzanilla would have been an interesting match to watch, because it would have been a war from start to finish.

It’ll be up to Warrington and his promoters if they want to have him defend against the highly talented Stevenson. This writer’s guess is they won’t let Warrington anywhere near Stevenson. The only way that fight happens is if the International Boxing Federation orders Warrington to take it.

In round 3, Stevenson finished off Guevara. Referee David Fields stepped in and waived the fight off at 2:37 of the third.

The fight, known as the homecoming for 2016 Olympic silver medalist Stevenson, turned out to be a slaughter. Guevara didn’t belong in the same ring with Stevenson, which isn’t surprising given that the Mexican fighter was selected just 8 days ago for the contest. You’re not going to get much of an opponent eight day’s notice, and Guevara was proof of that.

Fighting in front of a large crowd of 5,150 boxing fans, the 22-year-old southpaw Stevenson batted Guevara around the ring like a baseball from round one. There was nothing Guevara could do to hold the bigger, faster and more talented Stevenson off of him. If Guevara at least had some punching power going for him, he would have at least been able to slow Stevenson up. He didn’t have that. Top Rank did an excellent job of selecting an opponent that stood zero chance of winning.

In picking such a horribly over-matched opponent in Guevara, Top Rank unwittingly made Stevenson look bad, because the fight was too much of a mismatch. It gave some boxing fans the impression that the promotional company is afraid to put Stevenson in with guys that have even a shred of talent.  Stevenson landed 32 of 67 shots for a 48% connect percentage, according to CompuBox. Guevara landed just 5 of 51 shots for a lowly 10 percent connect rate.

When you have a fighter that lands just 5 measly punches in three rounds, that tells that the contest was a dreadful mismatch. Surely, Top Rank can do better than this in selecting opposition for Stevenson to face. With Stevenson’s Olympic experience, he’s capable of beating top tier opposition. He doesn’t need to mow down fodder in showcase fights in order for him to look good in front of impressionable casual boxing fans.

Stevenson hit Guevara with a left to the head followed by a right to the midsection that dropped him on the canvas in the closing seconds of round two. Moments later, Stevenson dropped the hapless Guevara with a left to the head. If there had been another 10 to 15 seconds remaining in the round, Stevenson would have finished the job in that round. It really didn’t matter though, as Stevenson got the job done in the third round in stopping Guevara.

Stevenson overjoyed with win over Guevara

“There is only one way to describe tonight — amazing,” Stevenson said after dispatching Guevara. “Seeing all of my family, friends and everybody from the city come out to support was incredible. We are going to do many more fights and even bigger. We are bringing big-time boxing back to Newark.”

It’s always nice getting a win, but it would help if Stevenson were to face at least top tier opposition from this point on. It’s not sporting when he’s matched against journeyman level opposition in fights that are designed as showcase affairs.

Stevenson is the #1 ranked contender for World Boxing Organization featherweight champion Oscar Valdez (28-0, 20 KOs). That’s a fight that Top Rank can easily put together, because they promote both fighters. However, it’s unclear whether they’ll make that match, since they would be cutting off one of their revenue streams. Stevenson is a future star, and Valdez is also a highly popular fighter.

If Top Rank matches Stevenson and Valdez in against either in 2019, one of them will lose, and that won’t help the company. There’s a possibility that Valdez will be moving up in weight to challenge WBO super featherweight champion Jamel Herring for his newly won 130 pound title.

The WBO will give Valdez a #1 ranking, and make him the mandatory for Herring as soon as he makes it clear he’s leaving the 126 pound division. Stevenson will go after the WBO featherweight title once Valdez vacates it. Stevenson will likely face #2 WBO Joet Gonzalez for the vacant WBO 126 pound title. Gonzalez (23-0, 14 KOs) wont be a walk in the park for Stevenson, especially with the poor opposition Top Rank has been feeding him.

Gonzalez looked sharp last Saturday night in stopping Manuel Avila (23-2-1, 8 KOs) in the sixth round on a Golden Boy Promotions card in Carson, California. Unlike Stevenson, Gonzalez has been fighting quality guys. It’s unclear why Top Rank hasn’t been matching Stevenson against good opposition, but it’s possible they want him to look good in front of the casuals so they’ll jump on board and become fans of his.

“I think it’s that time,” Stevenson said about wanting to fight for a world title. “I would love to go to England to fight Josh Warrington. We can do that in December. Let’s get it.”

Warrington is arguably the weakest of the featherweight champions right now. If Stevenson is looking for the softest of the 126 pound champions, Warrington is his guy. For the U.S boxing fans, they would prefer that Stevenson fight one of the talented champions like Leo Santa Cruz, Gary Russell Jr. or Oscar Valdez. However, those three would likely beat Stevenson, so Top Rank probably won’t make any of those matches. Stevenson is a good fighter, but he’s not shown the kind of talent that would enable him to beat guys like Santa Cruz, Russell Jr. or Valdez.