Hughie Fury vs. Alexander Povetkin in the works for Aug.31 on Lomachenko-Campbell card 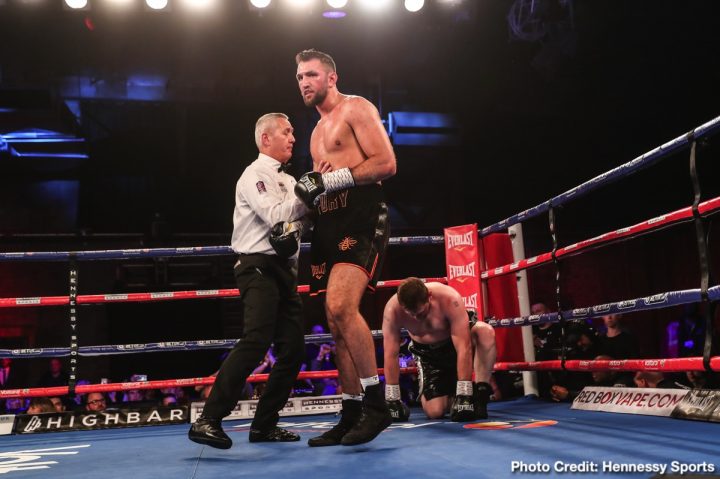 By Charles Brun: Heavyweight fringe contender Hughie Fury and former WBA champion Alexander Povetkin will be fighting on the undercard of Vasiliy Lomachenko vs. Luke Campbell on August 31 at the O2 Arena in London, England. This is a Matchroom promoter card on Sky Box Office.

The Hughie vs. Povetkin fight will be announced on Wednesday for the 31st of August.

Is Hughie being thrown to the wolves by Matchroom?

The 24-year-old Fury (23-2, 13 KOs) recently signed with Matchroom Boxing last week. Putting Hughie in with the 39-year-old Povetkin (34-2, 24 KOs) is a hard way for him to start out, but it looks like wants to get a quick title shot. A victory for the Fury against Povetkin would push him up the rankings quickly at the world. Povetkin #7 WBC and #10 WBA. For his part, Hughie is ranked #15 with the International Boxing Federation.

Hughie  is coming off of a 7th round injury stoppage of WBO heavyweight champion Samuel Peter earlier this month on July 12 in Jeddah, Saudi Arabia. Hughie and Peter fought on the undercard of Amir Khan vs. Billy Dib. Peter, 38, gave the constantly moving Hughie problems before having to bow out of the fight with a shoulder problem in round 7, but it was a mildly entertaining fight.

Is Matchroom promoter Eddie Hearn throwing Hughie to the wolves in putting him in with Povetkin? It sure looks that way. Povetkin might be shot to pieces, but even if he’s at only 50% capacity, he’s arguably world’s better than a limited fighter like Hughie. The fact that Hearn isn’t sticking any of his other Matchroom stable fighters in with Povetkin, besides Joshua, seems very suspicious. Is Hughie expendable?

Fury is catching the 2004 Olympic gold medalist Povetkin at the best time, as the Russian fighter is coming off of a seventh round knockout loss to Anthony Joshua last September. Povetkin started well in that fight in hurting Joshua in the second, but he then faded and was dropped twice in the seventh round that resulted in the contest being stopped. Earlier last year, Povetkin was knocked down by David Price in the third round.

While Povetkin came back to stop Price in round five, it was only because Pricey had gassed out. Had Price continued to fight strong, he very likely would have beaten Povetkin. The last time Povetkin looked really good was three years ago when he stopped former world title challenger Johann Duhaupas in the sixth round in December 2016. Although Povetkin has won three out of his last four fights since then, he’s looked old, and not the same powerful fighter that destroyed Duhaupas. Povetkin’s performance went downhill overnight after his destruction of Duhaupas.

Povetkin’s wins since that fight have come against these fighters:

Hughie will likely be a big underdog

The way Hughie fought against Peter, he’ll be a considerable underdog against Povetkin next month. It doesn’t matter that Povetkin will be coming off of an 11 month layoff, he’s still a true world class fighter. Povetkin has the the amateur pedigree to beat Hughie despite being past his prime. Hughie has looked godawful in his toughest fights of his career against Joseph Parker, Samuel Peter, Kubrat Pulev, Fred Kassi and Andriy Rudenko.

The young Hughie clinches constantly, and he runs out the ring. Hughie was on his way to losing against journeyman Kassi in 2016 when the fight was stopped on a clash of heads. Some boxing fans think Hughie intentionally clashed heads with Kassi, because he was exhausted and getting nailed with huge shots. Given the way the fight ended, it’s hard to see that as a win for Hughie.


« A final gamble on Yuriorkis Gamboa