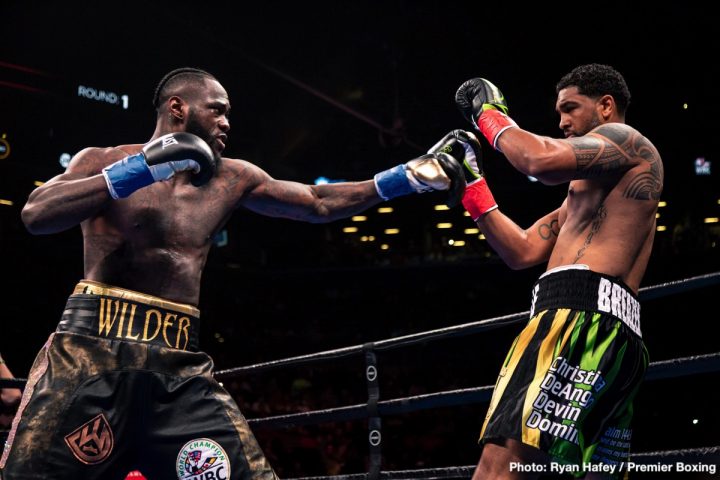 Ruiz Jr. recently beat previously undefeated Anthony Joshua (22-1, 21 KOs) by a seventh round knockout on June 1 on DAZN and Sky Box office at Madison Square Garden in New York. The victory for the huge underdog Ruiz made him the IBF, WBA and WBO heavyweight champion. Andy now has three of the four titles in the heavyweight division. The only belt not in Ruiz’s possession is the prestigious World Boxing Council strap that Wilder has. If the sanctioning bodies can pave the way for a fight for the undisputed heavyweight championship between Wilder and Ruiz, it would be huge.

Joshua’s promoter Eddie Hearn made sure he had a rematch clause in the contract for the June 1 fight so that his fighter could get a second fight with Ruiz if he were beaten in an upset. Now that Joshua has lost, Hearn triggered the rematch clause, which forces Ruiz to fight AJ in consecutive fights. Hearn and Joshua likely won’t want to temporarily get out of the way in order to let Wilder and Ruiz face each other for the undisputed heavyweight championship. Wilder vs. Ruiz Jr. would be for the good of boxing.

It would be very big of Joshua and Eddie to let the Wilder-Ruiz fight go ahead for the sake of the sport, but that’s not likely to happen. It would be a class move on Joshua’s part to let the Wilder vs. Ruiz unification fight take place. Joshua could then face the winner of the Wilder-Ruiz fight will four titles on the line. Joshua’s job would be much easier. Since Joshua won’t step clear of Ruiz to let the arguably more interesting fight between Deontay and Andy to take place, we’re going to see the Joshua-Ruiz rematch in November or December.

For his part, Wilder will be defending against 40-year-old Luis ‘King Kong’ Ortiz (31-1, 26 KOs) in a rematch in later this year. That’ll be interesting fight, but not like Wilder vs. Ruiz match-up. Ruiz will make good money in the rematch with Joshua, but it WON’T be the $50 million that he’s asking for. Hearn has made it clear that the purses and location has already been spelled out in the rematch clause. Whether that’s true or not remains to be seen.

Could Wilder vs. Ruiz push aside the Joshua & Ortiz fights?

As big as the Wilder-Ruiz fight is, it’ll be interesting to see if the sanctioning bodies can help make that fight take place ahead of the Joshua-Ruiz and Wilder-Ortiz fights. It’s clear that the Wilder vs. Ruiz undisputed championship fight is the one that the boxing public wants to see. Joshua gave it a good try against Ruiz, but he was humiliated by him. Joshua needs time to digest what happened to him. It won’t hurt for Joshua to wait a while before he faces Ruiz again. The same thing with Ortiz. He was blasted out in 11 rounds by Wilder in 2018.

There’s been a lot of second-guessing of Joshua’s decision to take the rematch with Ruiz right away instead of waiting until 2020 to make it happen. Joshua is so upset about the loss. He clearly isn’t thinking clearly about what could happen to him in the rematch.