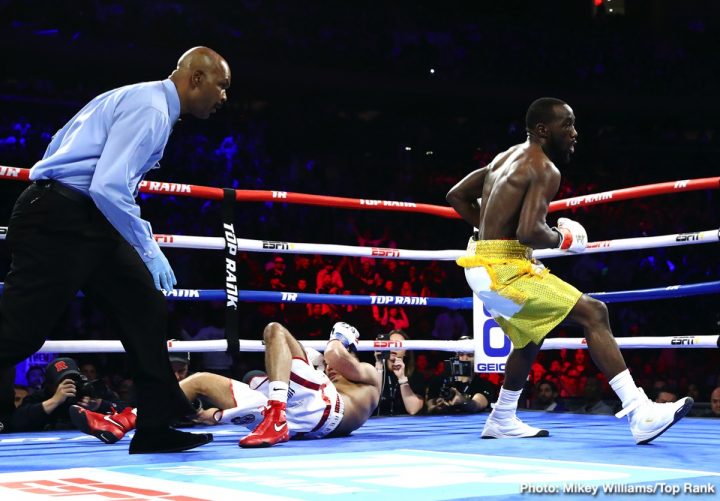 By Chris Williams: Terence Crawford says he’s not sure whether he’ll soon be facing Errol Spence Jr. in a unification fight, but he’s interested in making that fight happen. Crawford (35-0, 26 KOs) sees it as a business thing. Spence (25-0, 21 KOs) has other options right now available for fights against welterweight champions Keith ‘One Time’ Thurman, Manny Pacquiao, and Shawn Porter.

Spence also has the potential option of facing Saul Canelo Alvarez and Danny Garcia. If you look at all the great fights that Spence has potentially in front of him, he could be busy for the next two or three years before he turns his attention to Craword, who will be an older fighter by that point in his mid-30s.

“I don’t know. I can’t speak for everybody else. I want the fight,” said Crawford to Fighthype when asked if the Errol Spence Jr. fight is going to happen “real soon”. “It’s business at the end of the day. We’ll wait and see. Of course [Crawford wants to fight the other welterweight champions]. I’m 100 percent focused on the task at hand, and keep going for it in my career. I never predict a knockout,” said Crawford when asked if he’ll be looking to knockout his #1 WBO contender Egidijus Kavaliauskas if he faces him next. “I predict victories. That’s what I’ll continue to do,” said Crawford.

There’s a lot of interest from the boxing public in a fight between Spence and Crawford, but the match still needs to grow before it’s worth it to put together. Unlike Tyson Fury, who Top Rank needs to move in a hurry, Crawford has more time. Although Crawford is the same age as Fury, he has a better chance of staying near the top. Top Rank doesn’t need to rush Crawford the way they do with Fury, who is slow and kind of fat with a elderly physique. If Top Rank doesn’t rush Fury, they’ll be stuck with a guy that will soon be floundering in the heavyweight division.

“You’ve got to wait and see,” said Crawford when asked if he’ll beat Spence.

As we saw in Spence’s recent win over Mikey Garcia, he showed that he can box just like Crawford, but do a better job due to his superior size, reach and power. Crawford is still basically a 140-pound guy fighting in the welterweight division. It’s going to be a lot harder for Crawford to deal with Spence when the time comes. If the fight s delayed until Crawford is in his mid-30s, his chances of winning will be even more reduced.

Crawford’s game is based on his speed, reflexes, and counter punching. When those type of fighters age, they get beaten repeatedly by guys that don’t rely on speed to win. We saw what happened to Roy Jones Jr. when he hit his mid-30s. Jones started getting knocked out left and right. Crawford doesn’t have long to go before he gets to that age. He’s not a Gennady Golovkin type of puncher unfortunately, and he never will be. The knockout losses for Crawford could be right around the corner. He didn’t look good beating the limited fighter Jose Benavidez Jr. recently.

BoMac sees WBA Super World welterweight champion Keith Thurman thrashing the 40-year-old Manny Pacquiao when the two of them face each other next month on July 20 on Fox Sports PPV. But it’s not surprising that BoMac sees Thurman easily beating Pacquiao, because he also sees Spence vs. Shawn Porter as a 50-50 fight. When you realize that BoMac isn’t able to pick a winner between Spence and Porter, it takes away from everything he says about the Thurman vs. Pacquiao fight. He doesn’t know what he’s talking about, in other words.

There a massive amount of boxing fans that feel that Pacquiao (61-7-2, 39 KOs) is going to hand Thurman his first career loss. 34-year-old fringe contender Josesito Lopez almost beat Thurman last January. He had Thurman teetering on the brink of being stopped in the seventh round after he hurt him with a big shot. Luckily for Thurman, 30, the round ran out before Lopez could finish him off.

It wasn’t just that round in which Thurman was taking a beating. Thurman looked poor throughout the fight, and he barely won the fight. Thurman and BoMan are saying it was ring rust, but it looks to a lot of boxing fans that age and inactivity is rearing it’s ugly head with Thurman. When you sit around for two years, you’re not going to improve your game no matter what it is.

BoMac says Pacquiao had his chance to fight Crawford

“He had his chance,” said BoMac about Pacquiao having had a chance to fight Crawford in the past. “Bud would have stopped him. Timing. Bud has got the best timing in the business right now. He would time him and knock him out.”

Pacquiao didn’t fight Crawford in the past, because he wasn’t popular enough at the time. Only now after 10 years as a pro, Crawford is staring to get a little more popular, thanks to his fights being shown on ESPN. However, he’s still not a PPV buy. His recent fight against Amir Khan is said to have brought in a low number of buys on ESPN PPV. Crawford’s popularity is going to be limited if he fails to step it up against better opposition. Few boxing fans wanted to see Crawford fight the washed up Khan last April.

“He’s right up there,” BoMac said when asked if Crawford has the fastest hands in the welterweight. “He’s probably up there in the top five. They said [Amir] Khan was fast. But when he [Crawford] got in there with Khan, he was as slow as molasses. He was scared.”

Crawford isn’t that fast of hand speed. He looked slower than Khan. It’s interesting that BoMac isn’t admitting that Khan has the faster hand speed than Crawford, because that was obvious to all that saw the fight. What Khan didn’t have was the defense to keep from getting countered by Crawford. If Khan possessed Spence’s punching power, he would have walked Crawford down and likely taken him out.

“Both fighters want to fight, and I’m sure it’s going to happen real soon,” said BoMac about the unification fight between Crawford and Errol Spence Jr. “I’m very optimistic.”

We’ll see if BoMac’s prediction comes true about Crawford and Spence fighting soon. It depends on what BoMac’s definition of “soon” is. If he means, ‘4 to 5 years,’ then he could be dead on correct. That would be the same time schedule the Floyd Mayweather Jr. vs. Pacquiao fight was on before they finally fought each other. They waited almost a decade before they fought. Crawford has fought in the pro ranks since 2009, but he didn’t get noticed until 2015. So if they wait until 2023 or 2024, Crawford should be popular enough by that point for Spence to finally throw him a bone. Right now, Crawford is too much of an unknown with the casual boxing fans for it to be worthwhile for Spence to fight him.

“That’s a tough fight for him,” BoMac said about Spence’s potential fight against Shawn Porter. “If it was betting odds, I’d pick Spence over Porter. It’s hard to call, because Porter is a hard worker. He gets in there and tries to get the job done. But has he ever faced anyone like Spence? No. Has Spence ever faced anyone like Porter? No. On the top of the head, I call it a 50-50 fight right now. I give Porter all the credit in the world for what he’s done in the boxing world. He lost his [IBF] title, and then came back and won his [WBC] title. Every fight he’s lost has always been a close fight,” said BoMac about Porter. 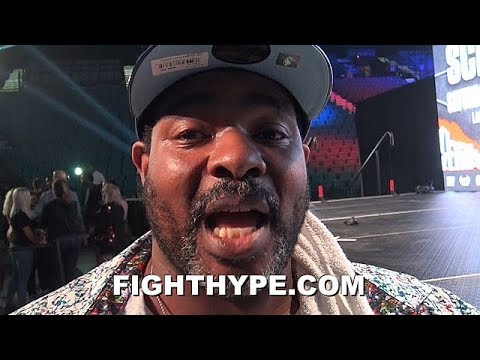 
« Thurman Finally Gets His Chance At Superstardom