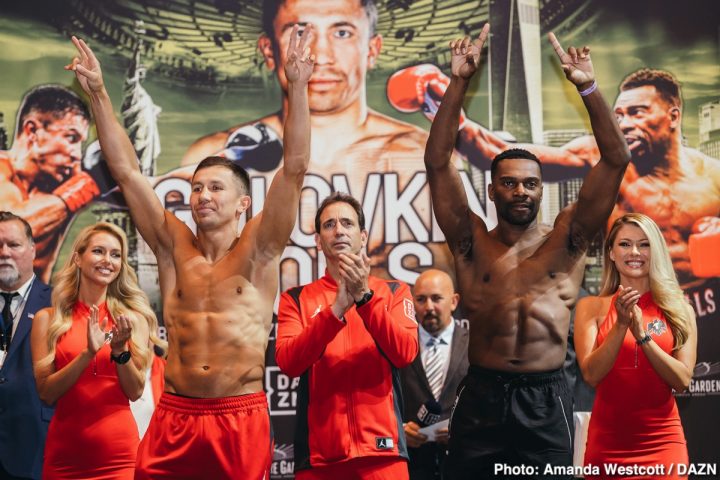 By Jeff Aranow: Gennady Golovkin says he’ll be fighting Saul Canelo Alvarez 99% in September, as long as he beats Steve Rolls (19-0, 10 KOs) tonight on DAZN at Madison Square Garden in New York. Canelo’s promoter Oscar De La Hoya said on Friday that they intend on making GGG wait, because he’s the “B fighter now” after his loss to Alvarez last September.

Golovkin (38-1-1, 34 KOs) says it doesn’t matter what De La Hoya says. The trilogy fight between him and Canelo will be taking place in September if everything goes right tonight.

The major issue Canelo and De La Hoya have with Golovkin is he’s not doing anything to build up the trilogy fight in September. GGG’s fight tonight against Steve Rolls is with an unknown fighter with a low ranking. It’s an opponent that is well below the guys that Canelo has been fighting lately. However, only the hardcore boxing fans have issue with Golovkin facing Rolls. The casual fans don’t care, because they don’t follow the sport closely enough to know that Rolls isn’t a good fighter. While had to struggle through a tough fight with Daniel Jacobs last month, Golovkin is taking it easy with a lesser fighter Rolls tonight.

The casual fans are giving GGG a pass, and that’s why this fight is taking place tonight. If the casual fans followed the sport of boxing like the hardcore fan, they likely would be upset at seeing Golovkin fight a no name like Rolls. The Canelo vs. GGG trilogy fight will likely happen in September if Golovkin wins tonight. It just might not be as big due to GGG choosing to fight an unknown in Rolls instead of someone good like Demetrius Andrade, Billy Joe Saunders or Jermall Charlo.

As you can see, Golovkin appears to believe that De La Hoya has little say in whether the trilogy fight with Canelo gets made in September. If Canelo has little choice in the matter, then he’ll have to fight GGG regardless of his feelings about his mediocre opponent Steve Rolls for tonight.

DAZN is paying Canelo a lot of money with the $365 million contract they’ve given him. They’re going to want value for their money, and that mean that a trilogy fight with GGG in September. It’s possible that Canelo could use his pull to push the trilogy match with Golovkin to May 2020, but that still might not change anything.

Canelo and Golden Boy Promotions can kick the GGG trilogy fight down the road a little, but they’re still going to have to make that fight eventually. If Golovkin chooses to fight another weak opponent in his next contest in September, Canelo and Golden Boy still won’t be happy. They can’t force GGG to fight good opposition if he doesn’t want to.

The other names that Golovkin was picking from for his fight tonight was Hassan N’Dam and Kamil Szeremeta. Those guys aren’t much better fighters than Rolls. It’s easy to imagine Golovkin choosing to fight one of those guys in September if Canelo doesn’t fight him.

De La Hoya likely can’t put off the trilogy fight too much longer without having DAZN let them know the importance of the Canelo vs. GGG fight being made soon. DAZN will want the subscribers that would come in with a third Canelo-GGG fight being made.

It would have been better if Golovkin hadn’t told Billy Joe Saunders and Demetrius Andrade to get in the line while he fights a lesser guy like Steve Rolls. That looks bad in hindsight. It would have been better for GGG not to talk about it, because it looks now like he’s telling the good fighters to stand in line while he takes soft jobs like Rolls in order to keep from losing again. The knowledgeable fans see tonight’s fight between Golovkin and Rolls as a cherry pick by GGG. They view the fight as a mismatch.

Golovkin says Canelo isn’t a promoter in telling him that he needs to have a world title before he can fight him again. GGG says Canelo talks too much.

“The second fight is more easy. More boxing. I think I win 7 to 5,” said Golovkin to DAZN about his second fight with Canelo last September. “I don’t think I lose. I’m focus on Steve Rolls 100%. If I beat him, 99% we’re going in September,” said GGG about a trilogy fight against Canelo.

“In September with Canelo. It doesn’t matter [that Canelo is saying that he needs to win a world title fight]. ‘No, I don’t want to fight with G,'” said Golovkin imitating Canelo. “‘I need new belt.’ This is talking. He talks too much, you know? He’s a fighter. He’s not a promoter. I know this deal. I know DAZN, my partner. I feel I’m in a little bit different position,” said Golovkin.

There it is. Golovkin sounds like Canelo has no way of refusing the third fight from happening in September. I’ll be interesting to see if that turns out to be the case. If Canelo has no choice in the matter, then it helps explain why Golovkin chose to fight a no name fighter tonight in Rolls. It would mean that GGG could have fought any guy in the division, as long as he was technically a ranked contender. Rolls just barely fits that definition with him ranked #15 with the World Boxing Council.

My goal is 100% all the belts in the middleweight division,” said Golovkin. “It’s very important to me. I want to fight unification fight. Last time, Billy Joe Saunders. He talks so much. He never wanted to fight with me. Now I want a real big name, a real big fight. A real good fight. That’s it. [Johnathon] Banks brings more extra for my footwork, for my legs, and for my speed. We don’t have a lot of time, just two weeks. We’re not completely different. Just bonus extra. Of course, I want [to knockout Rolls]. This is boxing. If he gives me chance, of course,” said Golovkin. 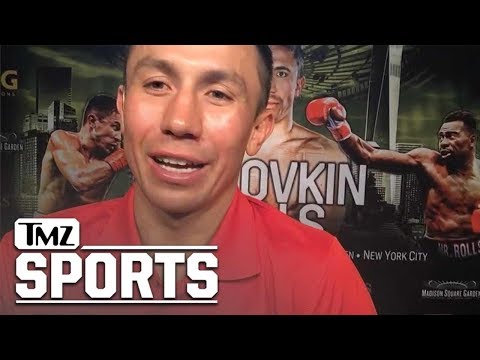