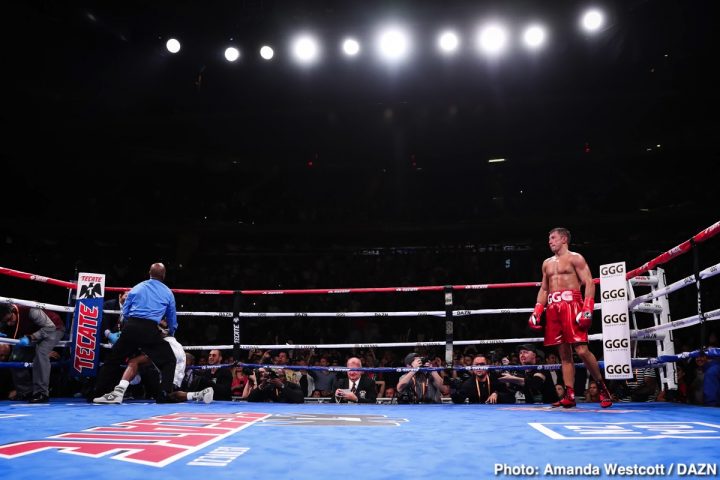 GGG knocked the 35-year-old Rolls flat with a left hook to the head. Rolls tried to get up, but he failed to beat the count.

“I want Canelo,” said Golovkin after the fight in calling out Saul Canelo Alvarez.

It was a good performance by Golovkin, but not a great one. The opponent wasn’t good enough to give GGG a lot of credit for the victory. He didn’t look much different than he had in his two fights against Canelo.

Golovkin was getting hit by Rolls due to him being too patient, and not throwing the combinations the way that his trainer wanted him to. It was mostly single shots from GGG. He hurt Rolls with a left hand. Moments later, Golovkin finished the job with another big left hook that sent Rolls down face first.

Rolls was at his best in round 2 when he landed some big shots. He nailed GGG with a left hook to the head, and then later a hard right. GGG’s head was snapped back from the shots.

Akhmedov knocked the 35-year-old McDaniel down in the third round with a flurry of shots. McDaniel got back to his feet. The referee Benjy Estevez then halted the fight. The official time of the stoppage was at 1:41 of round three. Akmedov looks ready to face WBA Super World champion Callum Smith.

The 25-year-old Ceballo averaged 100+ punches thrown per round. They were mostly shots thrown to connect, but they were effective against the shorter 32-year-old Eyubov. Despite the fight being one-sided, it was competitive due to the Frazier-esque style of fighting by the Kazakhstan born Eyubov.

The negative about Ceballo’s performance tonight was lack of power, and his leaky defense. Ceballo is going to need to improve his punching power and defense when he starts mixing it against the better welterweights like Shawn Porter, Yordenis Ugas, Errol Spence Jr., Manny Pacquiao, Keith Thurman and Terence Crawford. It’s unclear whether Ceballo will ever get to that level though. He might get weeded out before he gets to that level. A good match-up for Ceballo would be against someone like Josh Kelly. Those are two similar high volume punchers.

Madrimov, 24, hurt the 38-year-old Gonzalez with a body shot in the sixth. Madrimov then flurried with a storm of shots that resulted in the referee stopping the fight.

The 5’8 1/2″ Madrimov threw odd looking punches in the fifth round in jumping and throwing. He looked clumsy and uncoordinated at times, as he missed, and he didn’t get a lot of power on jump punches.

Madrimov was better off when he fought flat-footed. Gonzalez was able to hit Madrimov on when he dive forward. Madrimov also left himself open when he would switch from the orthodox to southpaw stance.

After the fight, Madrimov said he wants to fight for a world title. He’s currently ranked #7 with the World Boxing Association. He would match-up well with WBA champions Julian ‘J-Rock’ Williams and Brian Carlos Castano. With Madrimov’s limited size, he would do well if he moved down to 147 to battle champions like Keith Thurman, Shawn Porter, Terence Crawford, Manny Pacquiao and Errol Spence. It would be a good division for Madrimov. At 154, Madrimov is on the small side, and he might not match up against the bigger guys like Jermell Charlo, Tony Harrison and Jaime Munguia.

Undefeated 2016 U..S Olympian Charles Conwell (10-0, 7 KOs) stayed undefeated with a 10 round unanimous decision victory over all the always tough Courtney Pennington (12-4-3, 5 KOs). The judges’ score were 97-92, 97-92, and 96-93. Boxing News 24 scored it for Conwell by the score 97-92. It was a good step up performance by Conwell. The judges docked point from Pennington in the fifth for excessive clinching.