Fury vs. Schwarz: Arum says Tom is “no joke” 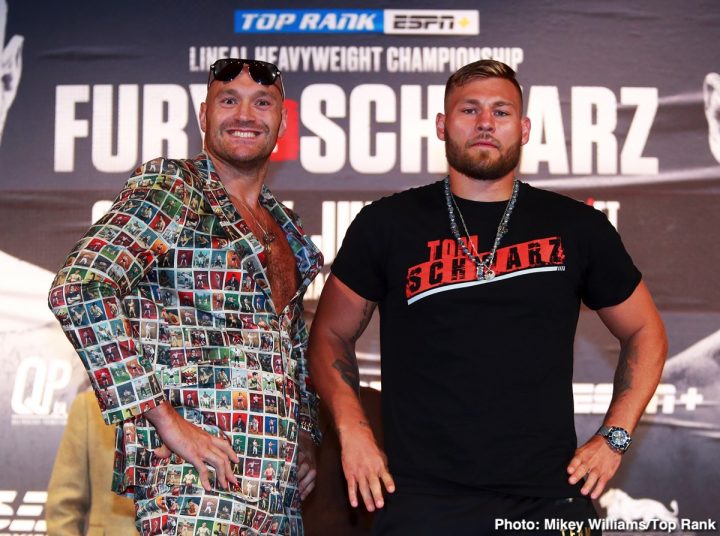 By Chris Williams: Top Rank promoter Bob Arum doesn’t agree with many of the boxing fans, bettors and the journalists that view Tom Schwarz (24-0, 16 KOs) as having no chance of winning against Tyson Fury (27-0-1, 17 KO) on Saturday night at the MGM Grand Garden in Las Vegas, Nevada.

Arum admits openly that he believes the 25-year-old Schwarz won’t win the fight against Fury, but he expects him to give a good account of himself in losing. The American pubic, which is who the Fury-Schwarz fight is being sold to, doesn’t like seeing the fights that aren’t competitive on paper.

When a perceived one-sided fight is being peddled to the U.S fans, they’re critical of it, because they want to see competitive match-ups. Fury vs. Schwarz technically isn’t a pay-per-view fight on ESPN, but it’s still being shown on a platform in which boxing fans need to pay monthly on ESPN+.

Arum: It’s disrespectful to say Schwarz is a bum

The fans aren’t calling Schwarz a “bum,” but they are saying he looks poor, and his resume is filled with mediocre opposition. Schwarz’s #2 ranking with the World Boxing Organization is also something that fans wonder about. How did Schwarz get ranked so high with the WBO when the best name on his six-year pro resume is Senad GashiThere are a lot of fans that see Schwarz’s resume, and wonder what the WBO was thinking give a higher ranking than Oscar Rivas, Daniel Dubois and Carlos Takam. The WBO’s top 15 is actually quite poor, but having Schwarz ranked so high is difficult to understand.

“I’m not saying he’s going to win the fight, but the guy can fight,” Arum said. “He’s no joke. He has a better chance against Fury to win this fight going in than [Andy] Ruiz did against [Anthony] Joshua. It’s disrespectful, and it’s really ignorant of what is going on in this sport, to say he’s some kind of a bum. The media, the fans, odds-makers, whoever is saying that, they’re saying it because they haven’t seen him and they don’t know. And so it’s kind of arrogant to think that just because you haven’t seen him he can’t fight,” said Arum.

One can understand Arum’s plight. He went through all this trouble to dig up Schwarz to match against Fury in a showcase fight, and the casual and hardcore boxing fan aren’t happy. It’s a fail. They see the fight as a mismatch, which means Arum wasted his time in going through the trouble of making this fight, because it won’t increase Fury’s popularity. Fury is winning over some U.S fans this week with his personality, but not because they like this fight.

Even the casual fans seem to have caught on this is a mismatch. Instead of Arum getting upset about the fans not being excited about the Fury vs. Schwarz mismatch, he should learn from the mistake, and strive to do better in the future. If Arum had asked this writer whether it would be a good idea to match Fury against Schwarz, I would have told to forget about it. Go find a quality contender to put in with Fury like Adam Kownacki, Dillian Whyte, Joe Joyce, Daniel Dubois, Michael Hunter or Filip Hrgovic.

The amount of interest in the Fury vs. Schwarz fight is about the same as the recent Gennady Golovkin vs. Steve Rolls mismatch last Saturday. That fight was a horrible one. GGG was fighting some guy picked from the bottom of the WBC’s rankings, and it ended suddenly with Rolls being knocked out in the fourth. With Fury-Schwarz, there should be more interest due to it being shown ESPN, and them being able to market it like mad. The fans still see it as a mismatch, which disappointing obviously for Arum. It means that they didn’t like his match-making. Arum should have done better than to find an unbeaten fighter with no wins of substance on his resume in Schwarz.

It’s not arrogance on the U.S boxing public’s part to see Schwarz as a poor fighter. This doesn’t appear to be an U.S vs. them type of thing. The American fans think Schwarz is a poor fighter, because he looks very, very average when he fights. Just looking at Schwarz’s fight against Senad Gashi last year, he looked slow, weak, and not impressive at all. When Schwarz fell down in the sixth round after being weakly head-butted, it looked like he flopped in order to win a disqualification. The referee ended up stopping the fight and disqualifying Gashi. Before that, Schwarz had looked poor. Gashi was landing the harder shots, throwing the nicer combinations, and looking like the better fighter. Gashi is not a great fighter at all, period. He’s a decent journeyman level guy. Schwarz couldn’t dominate Gashi, and that’s troubling. How do you not dominate a journeyman like Gashi when you’re ranked #2 by the WBO? It doesn’t make sense unless ranking is a crazy one.

Arum: Schwarz is a good fighter

For Arum to say that Schwarz is a good fighter, he would need to give a reason for why he feels that way. In other words, Arum should have been able to tell the boxing fans who Schwarz had beaten in the past that led him to believe that he’ a “good fighter.” The problem is, Schwarz hasn’t beaten a ranked contender during his career. As I pointed out earlier, the only notable name on Schwarz’s resume is the journeyman Senad Gashi, who is a poor fighter. So, Arum can’t give an example where Schwarz beat someone decent enough for him to be called a “good fighter.” Right now, Schwarz is an obscure fighter with a ranking that is too high for the level of opposition that he’s been beating. His record is padded with soft opponents.

“He’s a good fighter. He’s a big, strong guy,” said Arum in continuing to try and sell Schwarz as a good fighter for Fury. “Boxing is an international sport and you guys only want to pay attention to what is going on in the United States. In the U.S., most of the great heavyweights are playing in the NFL. But in Europe, in other parts of the world, there are a lot of talented big men fighting.”

The best thing that Schwarz has going for him is he has no punch at all, and that’s something that Fury arguably needs right now. Fury was knocked out in the 12th round in his last fight against WBC champion Deontay Wilder. The referee seemed to give Fury every chance under the sun to get back after he was seemingly knocked out by Wilder. Some fans think it was a long count the referee gave Fury. It looked to this writer like the referee should waived it off, because Fury looked seriously hurt in the 12th.

With Fury coming off that knockdown/knockout, the best thing that he needs is to be fighting a weak puncher that won’t treat the fight like it’s a continuation of the Wilder fight. If Fury’s punch resistance isn’t the same after what Wilder did to him last December in dropping him in the twelfth, then the last thing he needs is to be fighting a big puncher. That’s where Schwarz comes in. He can’t punch at all, he’s slow, and he’s easy to hit. Schwarz moves like he’s got both feed stuck in a big patch of mud. His mobility is sluggish. Schwarz is going to make Fury look good on Saturday night, and that’s obviously he’s been picked as his opponent.

Fury: Joshua is ‘finished’ as a fighter »