Fury: Joshua is ‘finished’ as a fighter 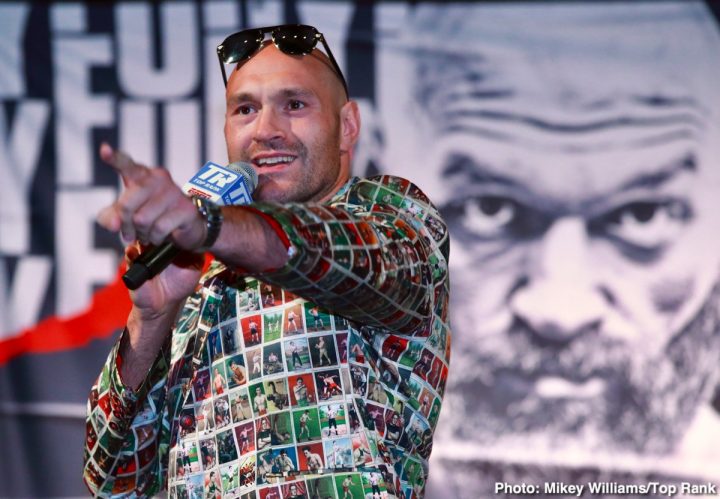 By Kenneth Friedman: Tyson Fury is talking more about Anthony Joshua and Deontay Wilder this week than he is his opponent Tom Schwarz. It’s not all that surprising that Fury is talking about Joshua and Wilder, because the fans seem more interested in hearing about them than they do Schwarz (24-0, 16 KOs).

Fury (27-0-1, 19 KOs) will have his lineal heavyweight title on the line for the fight with the German heavyweight this Saturday night on ESPN+ at the MGM Grand Garden in Las Vegas, Nevada.

It’s all over with for Joshua says Fury following AJ’s loss to Andy Ruiz Jr. this month in New York. Fury says he saw in Joshua’s face as soon as he got inside the ring with Ruiz on June 1, that he didn’t want to be there competing. According to Fury, Joshua won’t be able to come back from this loss. He’s basically done as a fighter at the world level.

Fury: Joshua didn’t want to be there

“When a man doesn’t want to be there once, he will always do it and it’s hard to come back from,” said Fury to BBC Sport about Joshua quitting against Ruiz. “It’s been done many different times by many different fighters. He did it that night and I don’t think he will come back from it. Finished. Ask any top trainer who has been around the sport a lifetime. When he got to the ring I saw he didn’t want to be there.”

Few people thought Joshua would lose to the huge underdog Ruiz Jr. earlier this month. Ruiz wasn’t going to be denied though. He was knocked down hard by Joshua in the third round. When Ruiz got up, he wasn’t going to hold back with his shots anymore like he’d been up to that point in the fight. Ruiz looked a little intimidated of Joshua before that. But once Ruiz got to his feet, he made up his mind that he was going to unload on Joshua with everything he had.

If Ruiz was going to lose, he was going to go down swinging. When you trap someone, they’re going to fight, and that’s we saw with Ruiz. Joshua obviously thought Ruiz was going to hoist up the white flag of surrender like his previous 22 opponents had done when they started getting hit hard. Joshua hadn’t had a lot of time to prepare for Ruiz after his previous opponent Jarrell ‘Big Baby’ Miller had been pulled from the fight due to several failed tests for performance enhancing substances. It was one of the rare fights for Joshua where he was the lighter guy. Ruiz came in at 268 pounds compared to Joshua’s 247 at the weigh-in. In most of Joshua’s fights, he’d been the much heavier fighter than his opponents. For example, Joshua outweighed Alexander Povetkin and Carlos Takam by over 20 pounds. All that extra weight helped Joshua dominate.

“Does Deontay Wilder have anything to bother me? Nothing at all. I’ve been hurt 1,000 times but Wilder didn’t hurt me once,” said Fury.

Fury should try and forget about Wilder for the time being, because he’s got to get passed Schwarz on Saturday night. There’s no point in talking up a fight with Wilder yet, because Schwarz is going to be looking to pull off an upset of his own on Saturday night in Las Vegas. This is likely the biggest payday of Schwarz’s career. If he can beat Fury, it would open the door for him to get bigger money fights against Ruiz, Joshua and Wilder. Fury likely wouldn’t take the risk of fighting Schwarz in an immediate rematch if he were to lose to him on Saturday night.

Top Rank, Fury’s co-promoters, would make sure that they steered him in another direction rather than putting him back in the with German heavyweight if he were to lose to him. Top Rank wasn’t keen on letting Fury fight Wilder again despite the fact that many boxing fans thought he deserved the win over him last December. Schwarz is a big guy, and he’s young. If he can figure out to corner Fury, he might be able to take him out with some combinations. But Fury is like a slippery eel inside the ring, and he’ll be looking to get out of the way of Schwarz’s punches all night long. Hopefully, Fury remembers to throw a few shots of his own, because he sometimes forgets to bring his offense with him.