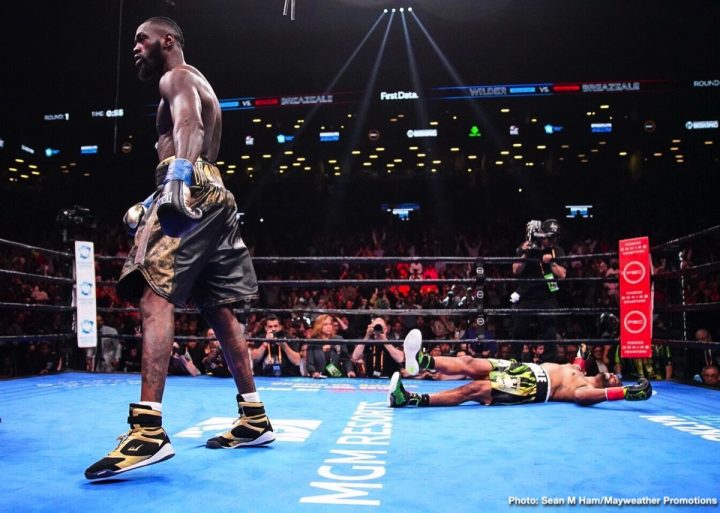 By Mark Eisner: WBC heavyweight champion Deontay Wilder hasn’t officially given up on fighting former IBF/WBA/WBO champion Anthony Joshua after his recent loss to Andy Ruiz Jr. Joshua (22-1, 21 KOs) will be fighting a rematch later this year with Ruiz in an attempt to recapture his titles, but there’s no telling how that fight will go for him.

Speaking with ESPN’s Sports Center, Wilder said the Joshua fight “will always be there” for him.

Wilder says it’ll be up to Joshua in how he comes back to his loss. If Joshua comes back stronger, and better, then he’ll beat Ruiz in the rematch. It’s a bad sign that Joshua was beaten in every round of the fight by Ruiz Jr. on June 1. There would be a little more hope for Joshua if this had been a lucky punch by Ruiz in the seventh round.

Before Joshua’s recent upset loss to Ruiz, Wilder, 33, didn’t seem too eager to fight him. He turned down a big offer to take the fight, which would have been a career high payday for him. The money that Wilder could have received in a unification fight for the undisputed heavyweight championship might no longer ever be there again. That’s the disappointing thing about it. Joshua has a rematch with Ruiz Jr. (33-1, 22 KOs) in November or December, and that’s and that’s a fight that could turn out badly for AJ.

Right now, Joshua vs. Wilder is still a viable match-up that would make both fighters a tremendous amount of money if it takes place soon. That could change overnight with one or both of those fighters losing their next fights. Wilder is facing the dangerous Luis ‘King Kong’ Ortiz (31-1, 26 KOs) in a rematch in September. That’s not a guaranteed win for Wilder, because he almost lost to Ortiz last year in March. The southpaw Ortiz hurt Wilder in the seventh round, and came close to stopping him. A Joshua loss to Ruiz in the rematch ruins the chances of a fight between him and Wilder. They can, of course, still fight each under those circumstances, but it wouldn’t be the same.

The smart thing for Wilder to see Joshua as a lost cause, and move on instead of wasting time and emotional energy hoping he’ll beat Ruiz. Joshua lacks the engine, chin, speed or mobility to beat Ruiz in the rematch. Joshua has decided to foolishly take the rematch with Ruiz, and now he’s stuck in a wild stream that is taking him into the abyss. Joshua’s poor decision-making is putting his career on the rocks. You can argue the only reason Joshua is willing to take that risk is because he’s made so much money already. Joshua can afford to take risks, because he’ll still be set for life if he’s beaten by Ruiz again. A fighter with more to lose wouldn’t make that same decision. Joshua isn’t thinking logically by taking the rematch with Ruiz, and Wilder is going to suffer for his mistake.


« Andy Ruiz Jr. disagrees with Arum about it not being the “real Joshua” he beat