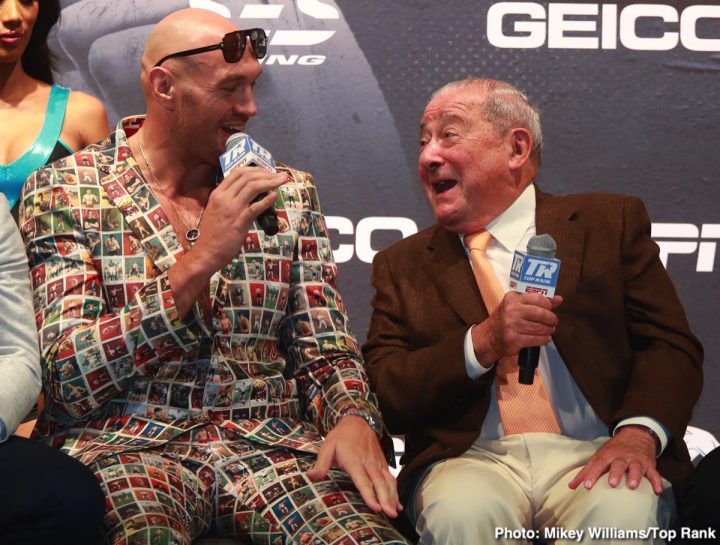 By Kenneth Friedman: Bob Arum has high hopes for the Deontay Wilder vs. Tyson Fury rematch next year in early 2020. Arum believes the fight will pull in roughly half of what the Floyd Mayweather Jr. vs. Conor McCregor fight brought in. In other words, Arum expects the Wilder-Fury 2 rematch to do 2 million buys.

It’s going to be awfully difficult to get anywhere close to two million buys for a rematch between Wilder and Fury. The biggest problem is Fury isn’t fighting good opposition now since his draw with Wilder. Fury (27-0-1, 19 KOs) will be fighting a big tall unknown German fighter in Tom Schwarz (24-0, 16 KOs) this Saturday night on ESPN+ at the MGM Grand Garden in Las Vegas, Nevada.

There’s not much interest in the fight despite Top Rank and ESPN promoting it like crazy, as if it’s a battle between two top fighters. Schwarz is just a guy with a high ranking with the WBO, but no real wins of substance on his resume.

Fury has made this week the ‘The Tyson Fury show’

Schwarz has blended into the background like a cardboard prop, almost completely forgotten at the news conference. Fury has dominated like a stand up comedian. It’s a one-man act. It’s the Tyson Fury show. Hopefully this doesn’t become a habit with Top Rank matching Fury against weak opposition that blend into the background like Schwarz. Fury is expected to fight in November or December before he faces Wilder in 2020.

“Our goal is to do in excess of two million,” said Arum to Fighthype in talking about his pay-per-view expectations for the Wilder vs. Fury rematch. “I wouldn’t be satisfied with all of this build-up to do less than two million buys in the United States. I think that’s completely do-able. Take Conor McGregor, when he fought Mayweather, what they do, close to four million buys?”

There’s a big difference between McGregor and Fury in terms of popularity. McGregor was already popular before he fought Mayweather due to his impressive performances in the UFC. McGregor made things more interesting with his personality. He has a lot of charisma. Fury has great stage presence as well, but not at the same level as McGregor. He’s not going to be able to connect with the average fan the way that McGregor did. The UFC has a huge audience, and that made it easier for McGregor. Fury isn’t going to be able to be able to bring in the same amount of boxing fans for the rematch with Wilder as McGregor did in attracting his MMA fans to watch him box Mayweather.

The Wilder vs. Fury 2 rematch will happen

“Wilder-Fury [rematch] is going to happen,” said Arum. “hopefully Fury gets by this fight [with Schwarz]. We’ll do another fight for him in the fall. Deontay Wilder has a fight in the fall against [Luis] Ortiz, and then the plan is early next year to put them together.”

The rematch between Wilder and Fury has got to happen, because there’s a lot of interest from fans. Unfortunately, Fury isn’t helping create more interest with him taking an easy opponent in Schwarz. It would obviously be better if Fury fought good heavyweights instead of a lesser guy like Schwarz, who arguably should be ranked at the bottom of the top 15. Even a ranking like that would be overly generous. Schwarz hasn’t fought anyone, and he looked poor against his toughest opponent Senad Gashi a year ago.


« Fury: Joshua is ‘finished’ as a fighter