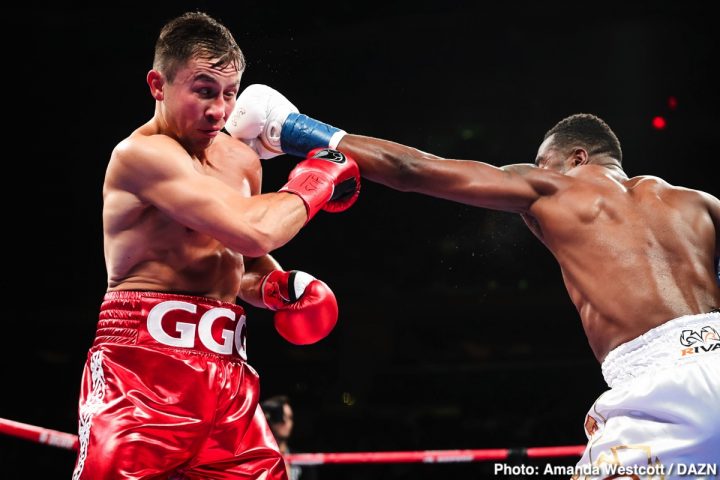 By Logan Garcia: Gennady Golovkin beat Steve Rolls by a fourth round knockout last Saturday night, but the victory won’t be good enough for him to get the trilogy fight in September against Saul Canelo Alvarez, according to Golden Boy Promotions CEO Oscar De La Hoya.

GGG (39-1-1, 35 KOs) knocked out Rolls (19-1, 10 KOs) with a left to the head in round four last Saturday night at Madison Square Garden in New York. The fight was streamed on DAZN. Golovkin took a lot of heavy shots from Rolls in the first three rounds. Golovkin’s new trainer Johnathon Banks was finally able to get him to throw some hard enough shots to take Rolls out in the fourth, but it was an underwhelming performance from the fighter from Kazakhstan.

Oscar made it clear after Golovkin’s fight last night over Rolls, that he’s going to need to win a world or face a talented guy for him to have a shot at facing Canelo Alvarez (52-1-2, 35 KOs) in a third fight.

Golovkin and his promoter Tom Loeffler should have listened to De La Hoya and Canelo when they both told him that he needs to win a world title to get a third fight. GGG obviously thought he could get the third fight the easy way by picking the little known 35-year-old Rolls from the bottom of the top 15 ranking at #15 WBC, and that it would be a good enough win to get trilogy fight against Alvarez in September. Unfortunately for GGG, it doesn’t appear that’s going to happen judging by De La Hoya’s comment on social media last Saturday night following Golovkin’s win over Rolls.

If the idea was for Golovkin (39-1-1, 35 KOs) to pick a soft touch in 35-year-old Rolls (19-1, 10 KOs), destroy him in front of a half empty arena at Madison Square Garden in New York, and then create pressure on Canelo to fight him in September, it failed. Golovkin looked bad in beating the little known Rolls, and came out of the fight having failed to achieve what he wanted to. Golovkin was getting hit a lot by Rolls, and there was uncertainty going into the fourth round whether GGG would even win.

Golovkin thinks he did enough to earn Canelo fight in September

GGG landed 62 of 223 for a connect percentage of 28%, according to CompuBox. Rolls connected 38 of 175 for a 22% connect percentage. As the stats show, there wasn’t much of a difference between Golovkin and Rolls in terms of punches landed and connect rate. What the stats don’t show is the power in the shots, and the effects. Golovkin was hit a lot by by Rolls with shots that were snapping his head back. Golovkin was getting lit up by Rolls in the first three rounds, and it’s hard to get excited about him fighting Canelo after the way he was getting hit.

Golovkin wants the Canelo Alvarez trilogy fight in September, but it remains to be seen whether DAZN will be able to make it happen. That’s Golovkin’s best chance of getting the third fight with Alvarez in September. DAZN will need to exert their influence on Canelo and Golden Boy Promotions to impress upon them the need for this fight to happen this year in order to help them bring in the subscribers they need. DAZN might not understand that they would be better off waiting until May of 2020 for the Canelo vs. GGG trilogy fight to take place, because right now isn’t the best time for the fight to take place. Golovkin looked bad against a mediocre opponent last Saturday night in Rolls.

GGG clearly needs to fight one of the world champions at 154, 160 or 168, beat them impressively, and then start calling out Canelo. What Golovkin did was he picked a guy that was barely a contender in #15 WBC Rolls, and then started calling out Canelo after the fight. GGG and his promoters may not understand it, but it didn’t make him look good in beating a weak opponent like Rolls. What made GGG look worse is he struggled in the fight before stopping Rolls. This was by no means an easy fight for Golovkin. He didn’t look impressive the way he should have against a fighter as old, inexperienced and ranking and with a low ranking in 35-year-old Rolls.

Gennady thinks the Canelo trilogy fight will happen in September

Rolls said all week that he was inspired by Ruiz’s performance as he attempted to author his own monumental upset in the same ring, but GGG would have none of it.

The fans don’t see Golovkin as the “people’s champion” as he believe them to view him. GGG is now seen by a lot of boxing fans as a cherry picker with the way that he chose not to fight one of the talented guys like Demetrius Andrade, Jermall Charlo or Billy Joe Saunders. Those are the type of guys that Golovkin should have been fighting last Saturday night instead of a guy ranked at the very bottom of the division ins #15 WBC ranked Rolls. Canelo received criticism for his fight with Rocky Fielding last December, but at least that guy was a world champion at super middleweight. Rolls was just a bottom ranked fighter with no experience. Fielding likely would have destroyed Rolls last night if it had been him fighting the guy.

GGG will likely get Canelo fight in September

DAZN will very likely insist that Canelo fight Golovkin in September. However, if De La Hoya has any say so, that won’t happen until Golovkin proves himself by beating a significant fighter first. De La Hoya and Golden Boy Promotions would likely be fine with GGG if he defeated a non-champion like Jermall Charlo, David Benavidez, Daniel Jacobs, Sergiy Derevyanchenko or Chris Eubank Jr. to earn the third fight with Canelo, but those fights aren’t likely going to happen. If Canelo doesn’t fight GGG in September, Golovkin will probably fight another obscure fighter in the middleweight rankings. Golovkin was said to be considering Hassan N’Dam and Kamil Szeremeta for last Saturday. Now that N’Dam has been knocked out by Callum Smith, he’ll be out of the running for GGG’s next fight, but Szeremeta, another unknown of limited talent, would likely be next in line for Golovkin. That’s another terrible fight, but it’s a predictable one if Canelo doesn’t fight him in September.

“I feel great. I feel like a new baby. Right now, I feel completely different because I came back to my knockout,” said GGG. “I love knockouts, and I love New York. It was a great night all around,” said Golovkin, who was saddled with a hugely controversial draw against Alvarez that most thought GGG won when the pair met for the first time, in 2017,” said Golovkin.

GGG’s win over Rolls gives him two wins over poor opponents in his last four fights. Before this fight, Golovkin had lost to Canelo by a 12 round majority decision last September, and beaten junior middleweight Vane Martirosyan last year in May. It’s unknown why Golovkin’s management matched him against a fighter from the 154 pound weight class, as he’d been ordered at the time to defend against middleweight Derevyanchenko.

Golovkin no interest in Andrade or Jacobs, wants Canelo or “new fighters” »