Golovkin no interest in Andrade or Jacobs, wants Canelo or “new fighters” 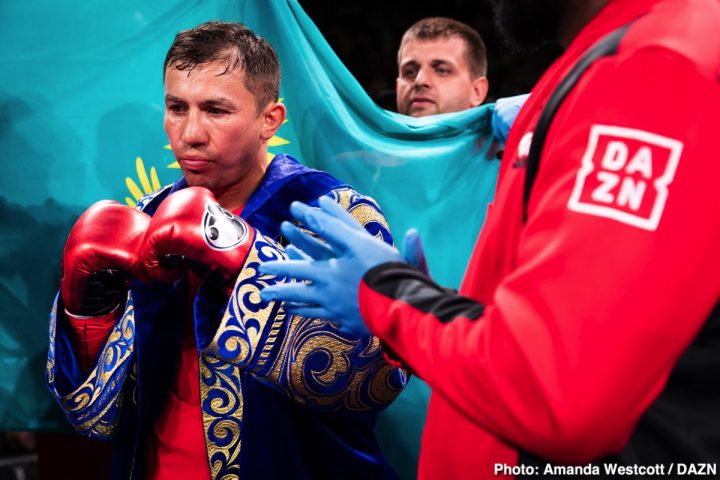 By Barry Holbrook: Fresh off his victory over Canadian Steve Rolls (19-1, 10 KOs) last Saturday night at Madison Square Garden, in New York, Gennady Golovkin says he has no interest in fighting Daniel Jacobs in a rematch or facing unbeaten WBO middleweight champion Demetrius Andrade if he’s unable to get the third fight with Saul Canelo Alvarez in September like he’s hoping.

GGG says the Jacobs fight is already passed, and that there are “young undefeated fighters” that should be the priority for him to face if he can’t get the trilogy match against Canelo in September on DAZN. Some boxing fans believe that the guy that Golovkin will end up facing in his next fight is Kamil Szeremeta if he doesn’t get the Canelo fight. This guy has little in the way of punching power, and he’s not fast. In other words, he’s a step down from Rolls for Golovkin. Unfortunately, there won’t be much interest in a fight between GGG and Szeremeta if this fight happens next, but that’s for DAZN to worry about. They signed Golovkin to a six-fight contract recently, and for his first match, he chose the little known Rolls instead of Jacobs, Andrade or Jermall Charlo.

Golovkin seemed on edge when continually asked by the media at the post-fight news conference last night about whether he would be interested in fighting Demetrius Andrade or Daniel Jacobs next. Oscar De La Hoya of Golden Boy Promotions said on social media last Saturday night that GGG must win a world title before he’ll bother putting together a third fight between Canelo and him.

“You’re talking about fighters that are already passed them. There are a lot of new fighters, very highly rated fighters, let’s talk about them,” said Golovkin when asked if he would be interested in facing Daniel Jacobs or Demetrius Andrade if he can’t get trilogy fight against Canelo in September. “I already answered the question. The young undefeated fighters should be the priority, not to come back to fighters we already know,” said GGG.

Golovkin doesn’t say who the “the young, undefeated fighters” are that he feels should be a “priority” for him to fight if he doesn’t get the trilogy match against Canelo in September. But in looking at the rankings, there aren’t a lot of names that stand out among the undefeated, highly ranked contenders in the division. The unbeaten ranked contenders in the middleweight division are fighters with inflated resumes and rankings.

We’re talking about fighters that nowhere near the level of Jacobs or Andrade in terms of talent. It seems pretty obvious that the guy that Golovkin is interested in fighting next if he doesn’t get the fight with Canelo is the little known, light hitting Kamil Szeremeta, who comes from Poland. Szeremeta was in consideration to fight GGG last Saturday, but they chose the equally obscure Rolls instead.

These are the unbeaten highly ranked contenders at 160:

These guys aren’t in the same league as Andrade or Jacobs in terms of talent. It’s not surprising that Golovkin is interested in fighting one of those fighters next if he can’t get the trilogy match that he wants against Canelo. These unbeaten, highly ranked fighters mentioned above aren’t a threat to beating Golovkin. Andrade and Jacobs would be a massive risk for GGG to face right now.

Golovkin explains why he won’t fight Andrade or Charlo next

“It’s kind of a provocative question,” said Golovkin when asked if he would be interested in fighting Andrade in September if he can’t get the Canelo fight. “If I say Andrade, then Charlo will say, ‘Why not Charlo?’ If I say Charlo, then Andrade will say, ‘Why not Andrade?’ Our priority is Canelo, then we can talk about Andrade and others fighters. I feel very happy. My smile all day. I shifted from first gear to gear,” said GGG in explaining how he was able to get the knockout in the fourth. “I gave him a couple of chances.”

Golovkin’s argument for why he shouldn’t fight Andrade or Charlo next is a weak one. For any fighter that he chooses for his next fight, other fighters are going to ask the same question, ‘Why not me?’ When Golovkin choose to face the bottom ranked Steve Rolls, the top fighters like Andrade, Jacobs and Charlo likely asked the same question. That didn’t stop Golovkin from still making the fight with Rolls. GGG still chose to fight Rolls despite the better known fighters like Andrade, Charlo and Jacobs likely asking, ‘why is he fighting this lower level guy?’ It looks bad on GGG’s part that he chose a weak opponent in Rolls for his fight last night, and now he’s ruling out arguably more talented fighters like Andrade and Jacobs in favor of the “young undefeated fighters should be the priority.”

Loeffler says Canelo is the priority for GGG’s next fight

Loeffler points out that Canelo is Golovkin’s priority for his next fight, but De La Hoya has already said that the fight isn’t going to happen until GGG wins a world title. This is why GGG was being pumped with questions by the media about other options for his next fight. Golovkin wasn’t being asked these questions for no reason. He was being asked because of De La Hoya saying last night that the trilogy fight between Canelo and Golovkin won’t be taking place in September.

Loeffler and GGG seem to think that the fight with Canelo is going to happen regardless. It doesn’t sound like it will though, which is why it would be a good idea for Golovkin to schedule a fight against a talented middleweight like Jacobs, Charlo or Andrade. The U.S boxing fans are likely not going to want to see GGG fight the unbeaten highly ranked Szeremeta, Quigley, Volny, Madiev, Falcao or Wojcicki next. Those guys are too obscure, and none of them are talked about by the casual or hardcore boxing fans. No one will be excited at seeing Golovkin face one of those contenders next. They may be unbeaten and highly ranked, but there’s zero interest in seeing GGG fight them.

“It’s not like I’m against going to Las Vegas in principal,” said Golovkin when asked if he doesn’t want to return to Las Vegas for the third fight with Canelo. “It’s that I have a bad feeling about going back to Las Vegas.”