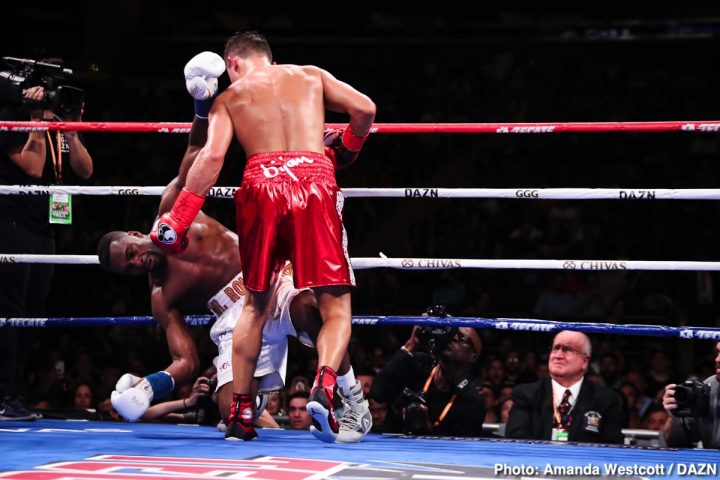 By Chris Williams: Gennady Golovkin looked less than his best for three rounds before saving himself with a fourth round knockout of his hand-picked opponent Steve Rolls on Saturday night at Madison Square Garden in New York.

The way that Rolls was connecting with head shots on Golovkin (39-1-1, 35 KOs), there was some worry whether he would lose to the Canadian. Rolls snapped Golovkin’s head back repeatedly with shots in rounds 1 through 3. At first, it looked to this writer like Golovkin was deliberately fighting at a slow pace. However, with the huge shots that Rolls was hitting GGG with in rounds 2 and 3, there’s no chance that he would deliberately take those punches in order to carry him. Golovkin didn’t look like the same guy he’d been before.

GGG said, “I want Canelo” after the fight, but based off this performance, he should stay away from the Mexican star. If this had been Canelo inside the ring tonight instead of Rolls, Golovkin would have lost to him for the second consecutive time. Golovkin needs another tune-up to get ready for Canelo.

There is much to criticize about GGG’s performance, but he got the job done at least in knocking out the #15 WBC ranked Rolls (19-1, 10 KOs) with a peach of a left hand in round 4. The fight was shown on DAZN. The referee Steve Willis counted out the 35-year-old Rolls at 2:09 of round four.

Here are the flaws in Golovkin’s game tonight:

These are the biggest flaws in Golovkin’s performance.

This was Golovkin’s first fight under new trainer Johnathon Banks, so perhaps the bad performance is part of GGG stuck in the middle of a new style. Golovkin fought the way he normally does unfortunately. He said he was going to throw combinations, but there were none of those. Golovkin was using his left hand a lot at the end, and that proved to be effective for him to score a knockout.

Golovkin struggling against a bottom feeder makes him look bad

What makes Golovkin look worse is the fact that he fought poor opponent tonight in Steve Rolls. GGG looked his age tonight, showing ring wear against a fighter that would have been blown by Canelo, Brant and Andrade at middleweight. In fairness to Golovkin, he needs more time with his new trainer Banks before we can give a full assessment of his game.

The speed, reflexes, defense and the combination punching wasn’t there for Golovkin tonight. His power is still fully functional. If he can land the kind of shots that he hurt Rolls with tonight on the chin of Canelo, he’ll have a good chance of knocking him out. It’s unclear if Golovkin can land those shots without being countered all night long.

Golovkin is still backing up

His new trainer Johnathon Banks didn’t want Golovkin backing up tonight, but he still did it. That was the mistake that Golovkin made in his rematch with Canelo.