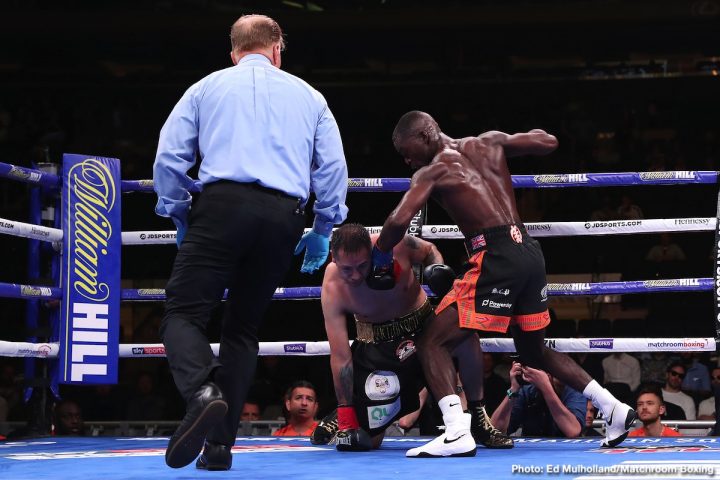 The time of the stoppage was at 1:39 of round four. The 2016 Olympic bronze medalist Buatsi was too fresh, too powerful and too big for Periban, who was picked out from the super middleweight division for this fight. As crude as Buatsi looked tonight at times, it’s not surprising that his promoters matched him up against Periban, who hasn’t fought in two years before tonight’s fight. Periban had last fought in May 2017 in a losing effort to Avni Yildirim.

Buatisi knocked Periban down with a punch to the back of the head in round one. In the fourth, Buatsi hit Periban with a left forearm to the face, and then knocked him down with a right hand that was on top of his head. It was a borderline rabbit shot. After Periban got back up, Buatsi hit Periban with five consecutive right hands that led to the referee stopping the fight. It appeared that Buatsi partially held Periban in place with his left hand before hitting him the final time. It was a dirty move on Buatsi, but so was the forearm and rabbit punches that he was hitting him with.

The positive from this performance by the 25-year-old Buatsi was his right hand power. He looked powerful with some of the shots that he was hitting the hapless Periban with. Buatisi has got some talent, but he needs to improve his defense if he wants to go anywhere in the light heavyweight division.

Buatsi was caught with a lot of shots from Periban, and he seemed to be bothered by the body shots that he was getting hit with. Buatsi’s defensive skills were nonexistent. He was hit with a lot of shots from Periban at times. Periban was able to flurry on Buatsi and nail him with four shots in a row to back him off. The fouling that Buatsi was doing troubling. He was using a lot of forearms, and throwing rabbit punches. He was also pulling Periban’s head down and hitting him.

It’s easy to imagine what a big punching light heavyweight would do to a limited fighter like Buatsi. Those guys would have knocked Buatsi out tonight. At this point, Buatsi’s promoter Anthony Joshua needs to back him off from fighting anyone talented, and have him slowly develop for three or four years before letting him fight the elite level guys. At this point, this writer sees Buatsi losing to these light heavyweights: Oleksandr Gvozdyk, Dmitry Bivol, Marcus Browne, Artur Beterbiev, Sergey Kovalev, Sullivan Barrera, Callum Johnson, Callum Smith, Badou Jack, Eleider Alvarez and Joe Smith Jr. Anthony Yarde would give Buatsi a lot of problems with his power.

“He was slippery, I took my time and when I hurt him, it was time to get him out of there,” Buatsi said about Periban. “He was in there to win.”

Former WBO 140-pound belt holder Chris Algieri (24-3, 9 KOs) dominating British domestic level fighter Tommy Coyle (25-5, 12 KOs) in stopping him in the eighth round. Coyle, 29, decided he’d had enough and opted not to come out for the ninth.

The 35-year-old Aligeri’s eyes were both badly bruised by the end of the fight. He had black eyes, and he looked beaten up by the light hitting Coyle.

“I had a tough guy in front of me,” Algieri. “100% [I was in trouble]. They knew I was a jabber and they caught me early. I had to switch things up. Tommy had been hurt to the body. I am a good body puncher.”


« Ruiz Jr: “Joshua is underestimating me, I can see it in his eyes”