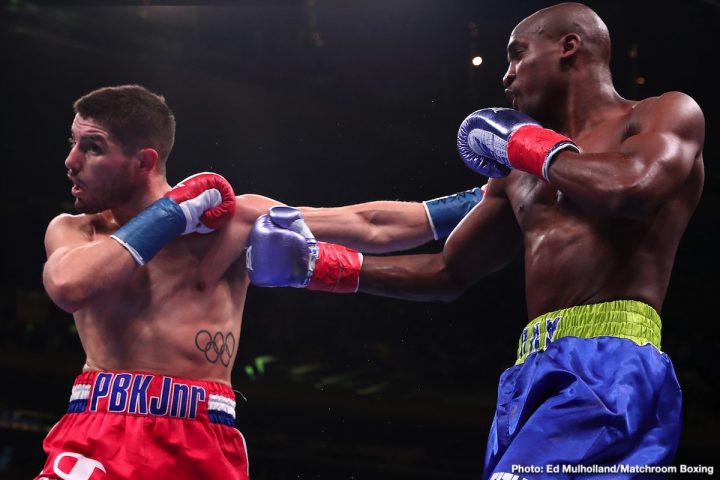 Robinson was whiffing on his attempts to land head shots throughout the fight. Kelly, 25, did an admirable job of avoiding the power shots from Robinson. However, Robinson made adjustments in targeting Kelly’s midsection for his shots, and he found a lot of success hitting him there. The punches seemed to bother Kelly, as he backed up against and his work rate dropped off dramatically.

Kelly started off strong in the first five rounds, but he seemed to fade in the second half of the fight. Robinson trapped Kelly against the ropes and landed nice shots in rounds seven, eight and ten to pull out a draw.

“Kelly’s awkwardness gave him problems but Robinson got to grips with it,” said former WBC cruiserweight champion Tony Bellew to Sky Sports. “Kelly’s rhythm was brilliant but he switched off. You can’t do that.”

The mistakes that Kelly made in the fight against Robinson were the same ones that he made in his previous contest against Przemyslaw Runowski last April. Kelly insisted on fighting with his hands down by his waist, even though he was getting hit a lot by Robinson. Most of the shots that Robinson threw missed, but the ones that he was able to land really got the attention of Kelly. The judges obviously noticed all the shots that Kelly was getting hit with, and they chose to give many of the rounds to Robinson.

This was a big disappointment for Kelly, because he came into the fight as a solid favorite over Robinson.

For Kelly to go beyond the level of where he’s currently at, he’s going to need stop showboating as much, and fight in a more technical manner. He clearly lacks the reflexes and defensive ability for him to beat the guys at Robinson’s level. Besides Kelly’s defensive lapses, he lacks the punching power and the work rate for him to succeed at the upper level of the welterweight division. When a fighter lacks power, then they need to be able to throw a lot of punches to win. Kelly isn’t throwing enough punches for him to decisively beat fighters like Robinson.

A new trainer is a must for Kelly for him to improve. His current trainer Adam Booth doesn’t appear to be improving him. Kelly is still using the same junk style that he’s had since he turned pro, and it doesn’t work for him. He’s not fast enough, his reflexes are too slow, and his power isn’t nearly good enough for him to the fight the way he does.

It would be good for Kelly to go back to the drawing board, and work on the problems that Robinson exposed tonight. If Matchroom Boxing promoter Eddie Hearn is willing to put Kelly back in with Robinson, then it would be a good opportunity for him to show that he’s learned from the fight. But tonight’s performance for Kelly makes it difficult for him to progress and move forward with his career.

This was Robinson’s second consecutive draw since March of this year. In his previous fight, he fought to a 12 round draw against #1 WBO Egidijus Kavaliauskas. That was a fight that Robinson was expected to lose, but he fought well enough to deserve a victory.

In a questionable decision, Katie Taylor (14-0, 6 KOs) defeated Delfine Persoon (43-2, 18 KOs) by a highly controversial 10 round victory to become the unified WBA/WBC/IBF/WBO female lightweight champion. The scores were 96-94, 96-94 and 95-95. Boxing News 24 scored the fight for Persoon 8 rounds to 2. Taylor was badly outworked the entire fight, and hurt in the last two rounds. She was falling down, and looking exhausted and hurt. The scoring was disappointing to say the least. After the fight, an upset Persoon walked out of the ring without being interviewed.

Taylor said, “Yeah, I definitely felt like I done enough, especially early on. That’s my nature I stand there and fight too much. I probably should have been more disciplined. I knew it was going to be that kind of fight, she’s a great, great champion. I’m definitely happy to give Delfine a rematch. There’s Amanda Serrano,” Taylor said.

It’s likely that Taylor won’t bother fighting Delfine right away. It was clear from watching the fight that Persoon had her number. If Matchroom Boxing makes the mistake of putting Taylor back in with Delfine, she’ll likely lose the rematch. Serrano (36-1, 27 KOs) is the logical choice for Taylor to fight next. Delfine is all wrong for Taylor. If they fight again, Taylor will have problems with her size and work rate once again.