Carl Frampton to fight on August 10 on ESPN+ 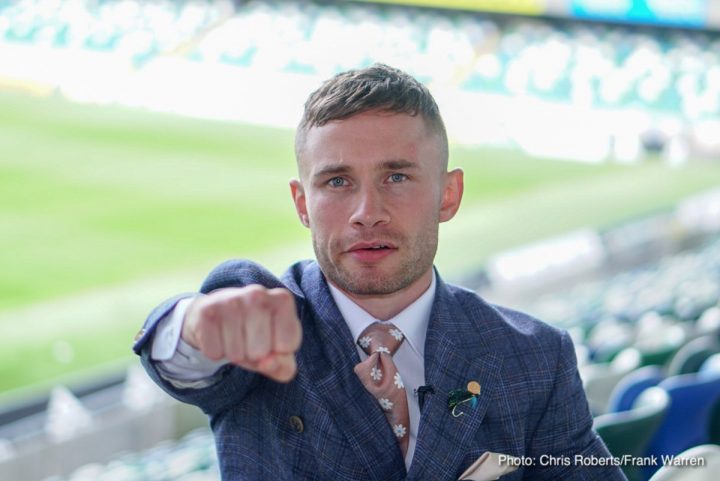 By Charles Brun: Carl Frampton will be in action against an opponent still to be determined in a headline fight for his new co-promoters Top Rank Boxing on August 10 on ESPN+. Frampton (26-2, 15 KOs) will possibly be fighting at Madison Square Garden in New York or Liacouras Center in Philadelphia, according to Dan Rafael.

It’s believed that Frampton, 32, could be soon be challenging unbeaten WBO featherweight champion Oscar Valdez if Carl wins his August 10 bout. That would be a tough match-up for the Irish fighter Frampton, because he was recently decisively beaten by IBF featherweight champion Josh Warrington by a 12 round unanimous decision on December 22 in Manchester, England. Frampton looked like a shell of his former self in that scrap. Call it an off night or whatever, but Frampton didn’t look like the same guy he once was.

Frampton should fight a good opponent on August 10

Top Rank won’t be doing Frampton or the boxing public any favors by feeding him a soft job in his headline fight on August 10 on ESPN+. U.S fans have to pay $4.99 each month to subscribe to ESPN+ to watch boxing, and they’re not going to be pleased to see Frampton competing in the main event against someone that is completely over-matched. Frampton needs to at least be facing someone that has a chance of beating him, and not just a punchers chance.

We saw that with Frampton’s match against Luke Jackson last August in Belfast. Frampton blew out a guy that looked like he didn’t belong inside the same ring with him on the night.

Jackson looked terrible in that fight, and it was disappointing to see Frampton taking on such a low level opponent. Since this is Frampton’s first fight with Top Rank on ESPN+, they need to put him in with someone that give the fans their money’s worth.

Lineal heavyweight Tyson Fury is fighting a weak opponent on ESPN+ this Saturday night, and that has a lot of fans unhappy, because it’s a headliner match. The fights on ESPN+ should ideally be competitive match-ups that are either 50-50 affairs for the main event or at least close to that. The mismatches should be saved for the off stream fights, not the ones closer to the headline attraction.

Just having Frampton fight some poor sap on August 10 won’t be sporting, and it won’t do anything to enhance the match against Valdez later this year. The positive that could come out of Top Rank putting Frampton in against a good opponent in his next fight is it would give U.S fans a heads up to determine whether it’s worth it to watch the Valdez-Frampton fight. If Frampton struggles to defeat one of the contenders in the 126-pound division, then the U.S boxing public can steer clear of watching the Valdez-Frampton fight later on in 2019.

Top Rank should consider pitting Frampton against one of these contenders for August 10:

It’s unlikely that Top Rank will put Frampton in with any of those guys, because they’ve got some talent. Frampton can probably still beat a flawed fighter like Conlan, but the rest of those contenders would give him issues. Ramirez, Nyambayar, Rojas and Magdaleno would all likely beat Frampton at this point in his career.

Carl has wins over Leo Santa Cruz, Kiko Martinez and Scott Quigg. Those are by far the biggest names on Frampton’s 10-year pro resume in terms of victories for him. However, his win over Santa Cruz in 2016 was controversial, as it was close and could have gone the other way. The fight took place in front of a huge pro-Frampton crowd in New York. Although Santa Cruz was the American, he might as well have been the visitor from another country, because the crowd was almost entirely Frampton fans. Whether the cheering from the pro-Frampton fans in the audience influenced the judges to give him the decision is unknown.

There were a lot of fans afterwards that felt that Santa Cruz had looked like the better fighter by far. In the rematch, Santa Cruz defeated Frampton by a 12 round decision in January 2017 at a neutral venue in Las Vegas, Nevada. At that point, Frampton urged Santa Cruz to come fight him in Belfast, but he wasn’t interested. Santa Cruz felt that he’d already fought Frampton in front of his home crowd in New York and lost by a controversial decision, so he didn’t want to potentially repeat that experience by traveling to Belfast to face him.

Since that fight, Frampton has looked less than impressive against Horacio Garcia, Jackson, Donaire and Warrington. To his credit, Frampton has won three out of his last four fights, but unfortunately he’s not shined.

Nonito Donaire proved to be a difficult opponent for Frampton last year in April 2018. Although Frampton won a one-sided 12 round unanimous decision by the scores 117-111 x 3, he took some huge left hooks and right hands from the 35-year-old Donaire right on the button. The thing is, this wasn’t a prime Donaire, and he wasn’t in his best weight class of 118. Nevertheless, Donaire landed some shots against Frampton that would have buzzed guys much bigger than him.

You’ve got to give Frampton much credit for being able to take those hard punches from Donaire without going down. Eating those shots obviously didn’t do Frampton any favors. Following those two fights, Frampton has looked pedestrian in his contests against Luke Jackson and Warrington.

The two-time Olympian Valdez is in the middle of learning a new style of fighting from Reynoso, who is well known as the trainer of superstar Saul Canelo Alvarez. The good news for Frampton is he won’t have to deal with Valdez the slugger. Valdez would be a real problem for Frampton if he came out slugging like he used to do. If Frampton is going to beat a guy like Valdez, he’ll need to box him by using his quick feet.

By the seventh round, Valdez was fighting with his mouth open, and blood leaking from his broken jaw. In hindsight, the fight arguably should have been stopped, but Valdez stuck it out to the finish to stay unbeaten. After that match, Valdez took a year off from boxing, healed up, and came back with a new fighting style. He’s since won two easy fights against light hitters Sanchez and Carmine Tommasone. Frampton will need to come up with the perfect game plan for him to defeat Valdez, because right now it’s not looking good for him.