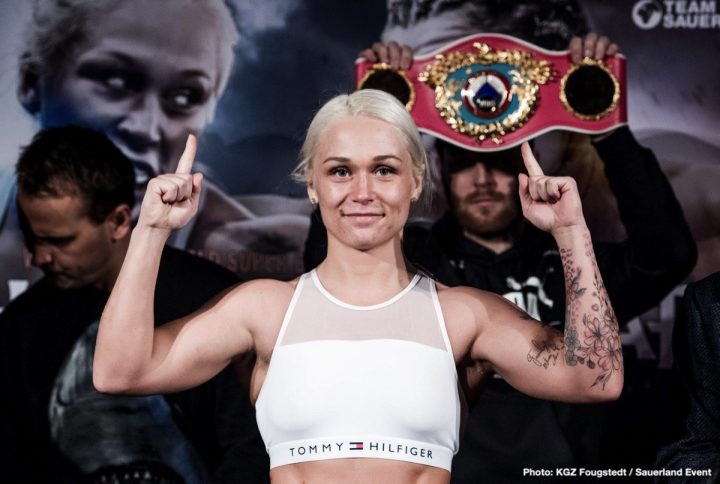 “There’s no limit to what Dina can achieve, she has huge potential,” says Christensen, who until 2018 was Denmark’s only female World Champion.

An hounour Christensen now shares with Thorslund, with whom she had the opportunity to spar and train alongside before hanging up her gloves in 2012.

“I remember from sparring that that Dina hits incredibly hard with both hands. There’s a lot of weight in her punches and she possesses a lot of power.

“I think Dina has the potential to become a World Champion in multiple weight classes. She has the ability to box anywhere in the world. She has the skills and also the confidence to go really far.”

“Adams is the type of fighter that likes to come forward and fight on the inside, and that is where Dina is really strong,” she says.

“Dina will be challenged when she encounters a technical boxer, who is fighting at a distance, and this is not the case with Adams. If Adams does not change her normal tactics, where she wants to turn a fight into a a brawl, then she is in big trouble. My prediction is that Dina will knock Adams out.”

“Horsens is a cool boxing town,” recalls Christensen. “The atmosphere was fantastic when I fought there and I’m sure it will be the same on Saturday night so Dina has something to really look forward to.”

THORSLUND: “I WILL SEND ADAMS BACK DOWN UNDER WITH A BANG!”

Dina Thorslund (13-0, 6 KOs) and April Adams (11-1-1, 4 KOs) came face-to-face at a press conference today in Copenhagen ahead of their WBO World Super Bantamweight title clash on Saturday at the Forum Horsens in Denmark.

Both fighters appeared in a confident mood as they met with the media in the Danish capital before making the trip to Horsens for their World title contest.

“I look forward to getting in the ring on Saturday,” said Thorslund. “I know Adams is an offensive fighter and I’m expecting a great fight. She comes with the storm, but it is me who brings the thunder. I will send her back down under with a bang. I believe I will win this fight by knockout.”

“It will be a great fight,” echoed Thorslund’s coach Thomas Madsen. “Adams can only box on the front foot and only knows one way, which is forward. This will give Dina some good opportunities. I believe she will knock Adams out on Saturday and show why she is the best in the world!”

“It’s great to be here in Denmark,” said Adams. “Everyone has been very welcoming and I look forward to boxing in front of the Danish fans. I’m here for one reason and that’s to take the belt home to Australia. Every fighter dreams of this opportunity and this is something I have been working towards my whole career. I’m well prepared and I feel ready to become World Champion.”

“We wouldn’t have travelled all this way if we didn’t believe April could win this fight,” added Adams’ trainer John Bastable. “They say they’re coming for the knockout and I hope they bring it from the first round because April is ready!”

April Adams (11-1-1, 4 KOs) hopes to have her compatriot Crown Princess Mary of Denmark ringside when she challenges Dina Thorslund (13-0, 6 KOs) for the WBO World Super Bantamweight title on June 22 at the Forum Horsens.

Adams travels to Denmark in an attempt to dethrone the reigning 122 lbs ruler Thorslund, and the Brisbane-boxer, nicknamed ‘Armageddon’, dreams of doing so in front of the Australian-born Crown Princess.

“It would be absolutely amazing if Princess Mary could attend the event. I understand she has many obligations but my team and I would feel very privileged to have her ringside,” said Adams.

“Aussies love their sport and I’ve been overwhelmed by the number of people reaching out. It’s comforting to have people and local businesses wanting to help you and want to see you succeed. I’m so thankful for the support I’m receiving so far.

“Bringing the belt home isn’t just about winning a world title. It’s about giving back to all the people that have helped me on this journey: my sponsors, supporters and especially my team. I want to put Australia back on the world boxing stage.”

THORSLUND COACH: “DINA IS READY TO GIVE ADAMS A BEATING!”

Thomas Madsen believes Dina Thorslund (13-0, 6 KOs) is primed to deliver a knockout performance when she defends her WBO World Super Bantamweight title against April Adams (11-1-1, 4 KOs) on June 22 at the Forum Horsens.

Denmark’s only World Champion puts her WBO strap on the line against Adams, the current Australian and WBO Asia Pacific Champion, who has worked her way into a mandatory position to force a shot at Thorslund’s crown.

Ahead of her second World title defence, Madsen reveals Thorslund has had the perfect training camp, and insists she is ready to defend her belt and prove why she is the number one fighter in the super bantamweight division.

“The training has gone well, the sparring has gone well and Dina’s weight has never been better,” said Madsen. “We’ve trained hard for a tough opponent who is going to come forward all night, but Dina is ready to give Adams a beating!

“Dina has told me that she is looking for a knockout, and I support that. I think she will systematically break Adams down until the hammer falls and she lands the knockout blow. She’s ready to show why she’s the best in the world!”

Rawlings, who has recently signed with MMA promotion Bellator, has been sparring Adams in preparation for her World title tilt, and is confident the Brisbane-boxer has the beating of the reigning 122 lbs champion.

“April is looking great,” she says. “She’s had a great camp and really levelled up in training these past weeks. I have no doubt she’ll bring home the belt!”

Having fought at the highest level, Rawlings is no stranger to facing the best and has offered Adams the following advise ahead of her biggest career test.

“I think the key to performing on the World stage is keeping a cool head, having confidence in your skills and calm in your mind,” says the 30 year-old mixed martial artist, who has not ruled out a future crossover into professional boxing.

“Professional boxing is definitely on my bucket list. I’ve fallen in love with the sport since crossing over to Bare Knuckle Boxing so it’s definitely something I’d love to test myself in.”

But for now, Rawlings focus remains on MMA and her upcoming Bellator debut. “I’m really itching to get in the Bellator cage so I’m pushing to get on their October card,” she says.

Liam Williams vs Karim Achour at The O2, London on July 13 »