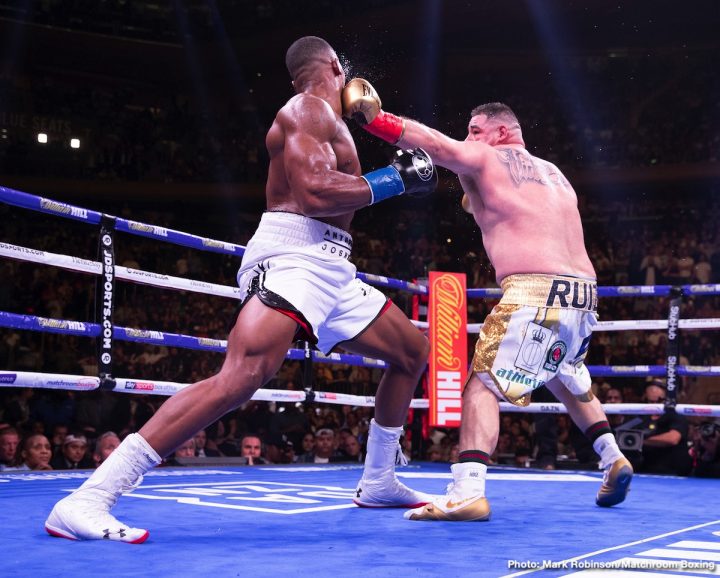 By Aragon Garcia: Andy Ruiz Jr’s trainer Manny Robles says if he were the coach for Anthony Joshua, he would tell him not to make the immediate rematch with his fighter. Robles states that it would be better for former IBF/WBA/WBO heavyweight champion Joshua (22-1, 21 KOs) to wait a year, take a couple of tune-ups, and then face Ruiz Jr. in a rematch.

Robles confesses that he wants Joshua to make the immediate rematch with Ruiz, because it’s better for them if he does. But out of kindness to Joshua, Robles advises against him making that move. He feels that Joshua will lose again if he elects to fight Ruiz Jr. (33-1, 22 KOs) straightaway instead of waiting a year before he fights him again.

It’s a little late now for Ruiz’s trainer Robles to be giving Joshua helpful advice about the rematch, because he his team has already triggered the rematch clause. Although Joshua could always change his mind if he wanted to, he probably won’t. He’s locked in. Joshua believes his loss to Ruiz Jr. was a case of him making a mistake in the third round.

Joshua is saying the rematch with Ruiz Jr. will be taking place in November. We’ll have to see if that’s the case, since the IBF mandatory Kubrat Pulev says he’s waiting for the International Boxing Federation to indicate when they’re going to order Ruiz to defend against him. If the IBF orders the Ruiz vs. Pulev fight, it could put Joshua on the back-burner for awhile.

“In my opinion, if it’s the direct rematch, it’s better, (for Ruiz Jr). He already did two fights in a row. It was 15 weeks of work,” said Robles to ESPN Deportes in discussing the Joshua-Ruiz Jr. rematch. “If I were Joshua’s coach, I would ask him to take a break, wait a year, choose to fight with someone else and do one or two fights before fighting with Ruiz,” said Robles.

Joshua isn’t going to take a break, and put the rematch with Ruiz off for a year. No matter what Joshua’s promoter Eddie Hearn of Matchroom Boxing or trainer Rob McCracken says, he’s going to take the rematch. Joshua wants the fight with Ruiz, and he’s willing to risk everything. If Joshua did choose to put off the rematch, Ruiz Jr. would either face WBC champion Deontay Wilder or Tyson Fury in his next fight. The 6’7″ Deontay (41-0-1, 40 KOs) holds the World Boxing Council heavyweight title, and he’s a real champion.

Fury is calling himself a “lineal champion,” but that doesn’t mean anything. He’s come up with his own title that he’s given himself. The real champions are Wilder and Ruiz Jr. They hold all the titles. Fury would be an option for Ruiz after he faces Wilder and Joshua. It would help if Fury beat someone good that’s ranked in the top 10. He’s not beaten any of note since he made his comeback last year.

Ruiz’s life has changed with win over Joshua

“We knew that if we won the championship, if we gave the surprise, our lives would change,” Robles said about him and Ruiz Jr.

Ruiz Jr. has changed his life with the victory over Joshua. He’s now in position for endorsement deals, and to make big money in the rematch with Joshua this year. Ruiz Jr. recently met the president of Mexico. That was a real honor for him. A second win for Ruiz over Joshua would be tremendous, because a lot of boxing fans expect him to lose. There’s still doubters out there that Ruiz needs to prove wrong.