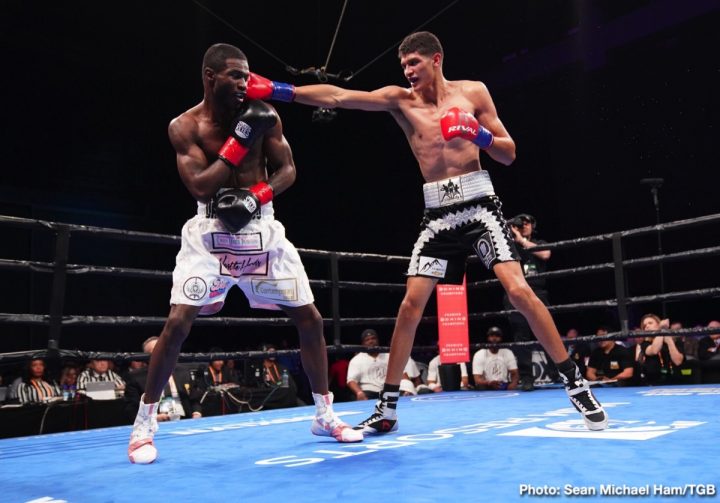 Undefeated super welterweight Sebastian “The Towering Inferno” Fundora, standing at an amazing 6-foot-seven inches, says he continues to grow with every training camp – literally and figuratively.

On Friday, June 21, Fundora (12-0, 8 KOs) of Coachella, Calif., faces Hector Zepeda (17-0, 4 KOs) from Tijuana, Mexico, in a 10-round super welterweight bout as the main event of a ShoBox: The New Generation tripleheader live on SHOWTIME at 10 p.m. ET/PT from WinnaVegas Casino in Sloan, Iowa.

Tickets, starting at $10, are on sale now and available at www.WinnaVegas.com.

Already believed to be the tallest 154-lb fighter in boxing history, Fundora says he has some unbelievable news coming out of training camp for this fight.

“I think I grew another inch,” laughed the giant southpaw. “I get measured at every training camp and it looks like I might have gotten taller by an inch.”

Fundora, who has appeared on television before but never in a main event, says he’s thrilled to be getting this important opportunity.

“I’m excited. Not only is it my first main event, but it’s on SHOWTIME! I’m very honored they think I’m a big enough name for this. I will be coming to put on a great show for them. I don’t know much about Zepeda, other than that he’s righthanded and about six feet tall. It doesn’t matter. I had over 100 amateur fights. When I was younger, I’d go to five-day-long tournaments and all the fighters I faced would be different sizes and styles. I’m ready for anything.”

The 21-year-old spent the first half of his camp for this fight sparring in Big Bear, Calif. against much heavier fighters and then closed campt in Laguna Beach. His work with strength and conditioning coach JR Corrales, Fundora says, is paying off.

NEWS:   Scardina Clashes With Nunez At The Top Of Title-packed Feb 26 DAZN Show

“I’m not only getting taller. I’m also getting stronger. I’m maturing, so age is kicking in. My jab will always be my best punch, but my power gets stronger in every fight. I was sparring with a lot of bigger guys and not getting pushed around by anyone. I’m already on weight too. My dad says he doesn’t want me to have to go through a fat camp and a training camp every fight. That’s like fighting two different battles at once, so I stay in shape at all times.”

Fundora’s father Freddy, who also serves as his trainer, says he’s happy with his son’s growth.

“Sebastian is looking sharp and he’s very focused. With every camp, he matures. He’s growing and that’s very important in the sport. From here on out, we’re just going to be sharpening the tools he already has. His strength and power and his boxing IQ. Zepeda looks like he’s going to try to box, but both these kids are from boxing families and that always makes for fireworks. You’re going to see two guys who have come to fight and put on a show in there Friday.”

It’s been a remarkable ride through pro boxing for the previously unheralded Fundora. Before becoming a TV favorite and “one to watch” prospect, Fundora first had to prove himself to promoter Sampson Lewkowicz, known for his eye for raw talent in boxing.

“Sebastian has grown as a fighter every time he fought,” said Lewkowicz. “Boxing is in his blood. Everyone in his family was a fighter. He’s going to be a world champion. I believe in him. He has worked very hard to become an overnight sensation in boxing.”

Friday’s event is promoted by Sampson Boxing in association with Paco Presents.

« Liam Williams vs Karim Achour at The O2, London on July 13