Amir Khan urges Joshua: ‘Do not rematch Ruiz next’ 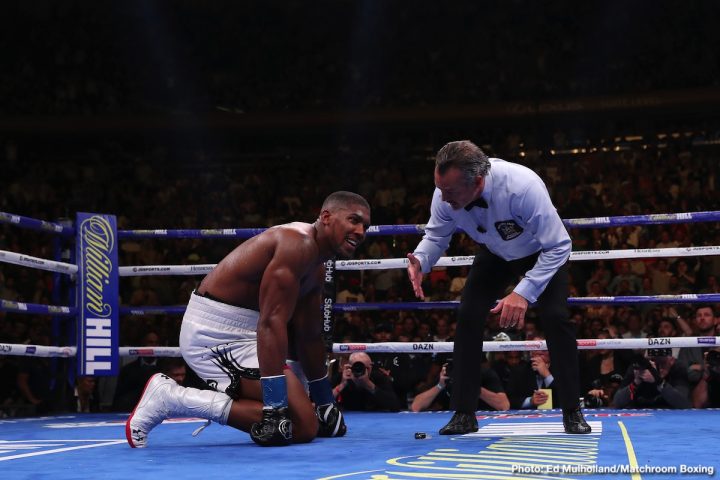 By Tim Royner: Amir Khan wants to see Anthony Joshua take a tune-up fight before facing Andy Ruiz Jr. in a rematch in an attempt to recapture his loss IBF/WBA/WBO heavyweight titles. Khan, who is no stranger to losing, feels that there’s too much of a risk for AJ to get beaten by Ruiz Jr. (33-1, 22 KOs) if he faces him straightaway in a rematch, because the loss will still be fresh in his mind.

Ruiz Jr. dominated Joshua with ease last Saturday night in knocking him out in the seventh round at Madison Square Garden in New York. What’s interesting is that Ruiz was selected by Joshua’s promoter Eddie Hearn from the bottom of the rankings in what he hoped would be an impressive performance by his fighter in making his debut in the United States. Ruiz wasn’t selected because Hearn thought he would have a chance of winning the fight. Unfortunately for Hearn, Ruiz wound up exposing the heavily muscled Joshua, knocking him down four times in the fight before he quit in the seventh rounds when he chose not to continue fighting. The biggest flaw in Joshua’s game that Ruiz exposed was in the stamina department. Joshua looked so tired after throwing a handful of punches in the third round, it made you wonder if he needed oxygen in his corner.

“I’m not taking anything away from Anthony Joshua. He’s a great champion,” said Khan to IFL TV. “I think Joshua has beaten better opponents than Andy that he lost to. You have to give a lot of respect. He lost the fight. Let’s see how he can come back from that to see where the champion is at,” said Khan.

The decision has already been made by Joshua and his team to take the immediate rematch with Ruiz. Joshua, Hearn and trainer Rob McCracken made the decision to trigger the rematch clause in the contract to force an immediate second fight with Ruiz. Now it’s up to Joshua to show whether he made the right decision. Many boxing fans believe that Joshua, 29, will lose again. Unless AJ learns how to box from the outside, he’ll be countered to pieces by the faster, better skilled Ruiz.

Joshua has fallen in love with throwing huge shots that are easily countered by a classic counter-puncher like Ruiz. At the same time, Joshua quickly fades when he throws his big shots. Joshua is like an old rechargeable battery that loses it’s energy at a rapid pace, and no longer is capable of charging once it’s drained. Not only does Joshua fade fast when he throws punches, but it takes him many rounds to regain his strength.

Smart heavyweights like Ruiz aren’t going to wait around for five or six rounds before Joshua finally gets his second wind. Ruiz saw the big mistake Wladimir Klitschko made when he failed to take advantage of Joshua gassing out in the sixth round against him in 2017. Klitschko thought he had the victory in the bag after Joshua faded at the midpoint of their fight at Wembley Stadium in London, England. Wladimir thought he could just box Joshua to an easy decision, because he was fighting like a rank amateur from the sixth round. Instead, Joshua came back in the 10th, and hurt Wladimir an uppercut, and then finished him off in the 11th.

It’s a big risk for Joshua to take the rematch with Ruiz right away, and Khan knows that. Although Khan has never fought a fighter in a rematch after losing to them, he’s seen it happen plenty of times, and it often ends in failure for the fighter trying to avenge a loss. Joshua’s career will likely be over with if Ruiz smashes him again.

“I don’t think he should fight Ruiz straightaway, because in the back of his mind, he lost to him,” said Khan. “Ruiz is going to come into the fight more confident, which in a way it could be a bad thing. But at the same time it could be a good thing for him as well, because he’ll start making mistakes by coming forward, showing that he can knock him out again,” said Khan.

Joshua has history working against him

Throughout history, fighters that have been blown out the way Joshua was against Ruiz, they frequently lose as badly in the rematch. That’s why the well-managed fighters don’t take immediate rematches after they get blown out. They slowly regroup by taking other fights that they can learn from, and work on the flaws in their game that led to their loss. Joshua and his team have chosen not to follow the smart path shown by other fighters from the past. You can argue that it’s important for Joshua to avenge his loss to Ruiz as possible in order to keep the big money streaming in from his British boxing fans for his fights on Sky Box Office, and in stadiums in the UK.

If Joshua is able to avenge the loss to Ruiz Jr. immediately, then there might not be a big a drop off in the cash flow for him. In other words, the gravy train continues along the tracks for Joshua and Hearn. But if Joshua waits a year or two before he faces Ruiz again, he’ll likely lose popularity with fans. Of course, the risk in Joshua going straight into the rematch with Ruiz is he won’t be prepared, because there won’t be any time to improve. Joshua has already decided to stay with Rob McCracken, which means the same old ideas of the past will be used to get AJ ready.

There likely won’t be any improvement in Joshua’s game unfortunately, because he’s got the same old trainer, who hasn’t improved his weaknesses. Unless Joshua knocks Ruiz out, his chances of winning the rematch are low. Having the second fight in the UK could help Joshua though if they get a referee that keeps Ruiz from getting close. We saw that in Joshua’s fight with Joseph Parker in 2018. The referee kept Parker from getting near to Joshua to unload on him. There’s also a chance for a quick premature stoppage like the one we saw in the Joshua vs. Carlos Takam fight. But if the fight officiated in a normal way, Joshua is going to be trapped in quicksand in the rematch, and could get taken apart by Ruiz.

“I think he should have a tune-up fight to get his confidence back, and then jump into another big fight with Ruiz,” said Khan.

Joshua’s fans are convinced that he’s going to beat Ruiz in the rematch without any problems. They continually say that “something wasn’t right with him” last Saturday night. Those fans have obviously failed to see the warning signs there in Joshua’s previous fights against Alexander Povetkin, Klitschko, Parker, Takam and Dillian Whyte. Joshua’s punch resistance is like that of a lesser fighter. He can’t take a punch without getting wobbled. Moreover, Joshua conditioning is so horribly bad that it makes you wonder if he’s really cut out for a sport like boxing. Fighters need to be aerobically fit to perform at the highest levels in the sport. Joshua has the cardiovascular system of a three round fighter.

AJ has been able to mask his terrible stamina due to him scoring so many early knockouts against flawed fighters. He likely would have lost a long time ago if Hearn had matched him against Ruiz years ago. What Ruiz is doing is weeding Joshua out by showing that he’s not cut out for boxing at the upper levels of the sport. Joshua is good at beating old guys, and limited fighters, but he’s not really an upper level guy, as Ruiz showed. Deontay Wilder will likely expose the same flaws in Joshua’s game that Ruiz did in terms of AJ’s weak chin and poor stamina. Those problems are not going to go away, because they’ve been there his entire pro career.