Golovkin needs victory over Rolls to get Canelo trilogy fight 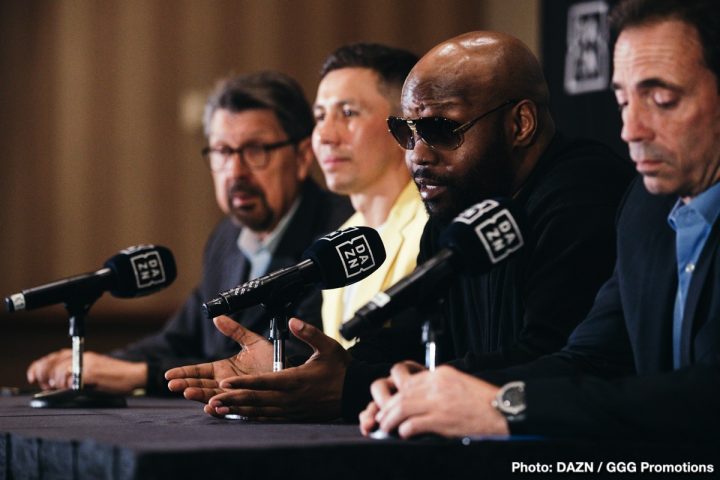 By Aragon Garcia: Gennady Golovkin is focused on beating Steve Rolls this Saturday night on DAZN to get his trilogy fight against Saul Canelo Alvarez in September. Although the Canelo trilogy fight isn’t a dead certainty for September, GGG’s promoter Tom Loeffler seems to think it will happen. He insists that it’s the “biggest fight in boxing.” The fans aren’t on the same page as Tom unfortunately. Canelo already beat Gennady.

GGG’s promoter Loeffler is talking like he’s been in suspended hibernation for a year, and just now woke up, and doesn’t understand that this isn’t 2017 any longer.

Loeffler has got it wrong. The biggest fight in boxing is rematch between Anthony Joshua and Andy Ruiz Jr. The second biggest fight is the winner of that fight facing WBC heavyweight champion Deontay Wilder. You hate to say it, but the Canelo vs. Golovkin rivalry is old news in the eyes of a lot of boxing fans.

Golovkin had his chance to beat Canelo, and he was outmaneuvered in both fights. Canelo adapted, and Golovkin failed to make the adjustments needed to win both fights. That’s the reality of it. GGG had his chance, but him and his former trainer Abel Sanchez couldn’t make the right moves to beat Alvarez. It’s understandable that Golovkin wants the third fight against Canelo for “business” purposes, but that doesn’t mean the fans want to see that fight.

GGG vs. Rolls not generating much buzz from fans

Unless the the interest heats up for this Saturday’s Golovkin vs. Rolls fight, it likely won’t generate a lot of subscriptions for DAZN. The casual fans could care less about what kind of ratings and subscriptions it brings in for DAZN. They just see the fight as not one they’re particularly interested in it. In looking at social media, many of the fans are saying, ‘Who is this Rolls guy?’ ‘Why is Golovkin fighting some old guy that we’ve never heard of?’ ‘Has GGG lost his confidence? Why is he fighting a mediocre fighter from Canada?’ It goes on and on with the fans. They’re NOT excited about Golovkin’s choice of opponent in him picking a bottom ranked contender to fight. Rolls would be a good opponent for someone that was recently trounced, but it’s a poor one for GGG.

Canelo is still fighting world class opposition with his recent wins over IBF middleweight champion Daniel Jacobs and WBA ‘regular’ super middleweight champion Rocky Fielding since his victory over GGG last September. With Canelo fighting world champions in consecutive fights, Golovkin looks weak in the eyes of a lot of boxing fans in picking a bottom fringe contender in Steve Rolls, who is ranked #15 with the WBC at middleweight.

Rolls is just barely a contender. Rolls is a classic definition of a fringe contender, and it’s disappointing that Golovkin feels he needs to fight this level of opponent at this time in his career. If the idea is for Golovkin to build up pressure on Canelo and his promoters at Golden Boy Promotions to make a third fight between them in September on DAZN, he’s going about it the wrong way.

GGG feels he no longer needs to prove himself, as he believes he’s already beaten Canelo Alvarez twice. As such, he’s now looking for the trilogy match with Canelo for “business” purposes. In other words, money. The fans don’t seem to be all that interested in seeing Canelo and GGG fight each other again. The reason for that is Golovkin has been inactive since his loss to Canelo in September 2018, and he’s scheduled to fight a no name fighter in Rolls (19-0, 10 KOs) this Saturday night.

“I look at [a third] fight as not just boxing but as business,” Golovkin said to ESPN.com. “I thought I won the previous two fights. I don’t need to prove anything to anybody. I have proved everything I needed to prove to myself. This is just business now.”

If you look at it from Canelo’s perspective, it doesn’t sound right that Golovkin is referring to the trilogy fight as a “business” type of match, because that’s going to be interpreted by some fans as he’s looking to cash out before retiring. Fans don’t want to see fighters just looking for a payday as they’re going out the door. They see boxing as a sport, and they’t turned off when fights are made just for the sake of business.

Golovkin’s outlook on the third fight Canelo is disappointing. The fact is, the fans see the first two fights between GGG and Canelo as a draw and a win and loss for Golovkin. Canelo showed that he’s the better fighter than Triple G in those two fights. Canelo also showed in his last two fights against Jacobs and Fielding that he’s more willing to continue to face the best opposition in the sport. Under those circumstances, it looks bad that Gennady is choosing to fight bottom fringe contender in Rolls. It’s a bad look on Golovkin’s part that he’s fighting a no name in Rolls while at the same time talking about how wants the business fight against Canelo.

“Right now I have six [more] fights,” said Golovkin. “I have a contract for six fights, three years, [then retire] because I love my family. I want the third fight…I know 95 percent it will happen in September.”

Saturday will be Triple G’s first match of his six-fight, three-year deal with DAZN, which will take him to his 40th birthday. Golovkin is counting on a victory over the 35-year-old Rolls on Saturday to lead to the third fight with Canelo Alvarez this September. Golovkin has recently been saying that he’s 99% certain that he’ll be fighting Canelo in September. Now he’s saying he’s “95%’ certain the fight will take place. Will Golovkin continue to drop the percentages of how certain he is that the fight with Canelo will be happening in September?

It sounds like Golovkin is just guessing about whether the trilogy fight with Canelo will happen rather than him being certain about. For Canelo and Golden Boy, it’s not a good time for them to make the third fight with GGG. The Kazakh born fighter hasn’t fought since his loss in September, and now he’s facing arguably one of the poorer contenders in the top 15 rankings. Loeffler has made a big deal about Rolls being 19-0, but what he’s not saying is that those wins have come against lesser opposition. Rolls hasn’t beaten top level fighters, and he would likely lose to even flawed guys like David Lemieux, Jason Quigley, Luis Arias, Brandon Adams and Jack Culcay.

If there’s interest on Canelo’s part in facing GGG in September, the negotiations won’t be difficult. With both fighters signed with DAZN, it shouldn’t be a problem to put the third contest together. DAZN wants that fight, so it might be difficult for Canelo to put it off for long. DAZN is paying him a lot of money with his $365 million deal. Canelo did a great job of bringing in a lot of subscribers to DAZN for his last fight against IBF middleweight champion Daniel Jacobs on May 4. Canelo doesn’t yet have an opponent for his September fight.

There’s a slight chance that Canelo can face WBO middleweight champion Demetrius Andrade if he defeats mandatory challenger Maciej Sulecki without suffering injuries in their fight on June 29. Andrade would likely be interested in jumping back into the ring to fight Canelo in September in a unification fight for the undisputed middleweight championship. Canelo vs. Andrade in September is a much better fight than the Canelo-GGG 3 “business” fight. However, Canelo, DAZN and Golden Boy Promotons can’t wait until June 29 to start promoting the September match. Canelo will need to know a lot sooner than that who his next opponent is for September.

Rolls is a huge underdog

The Canadian Rolls is a big underdog for this fight on Saturday for obvious reasons. He’s never fought anyone of note that would prepare him for the fight with Golovkin. He’s been matched carefully by his management, and he’s not ready for this kind of opponent. Unless Golovkin is as shot as some boxing fans think he is, he wins this match early on Saturday night. Golovkin has a new trainer Johnthon Banks, who is going to be pressing him to fight at a faster pace than ever before. It’s easier said than done. We’ll likely see Golovkin initially fight at a slightly faster pace, but then go back to his slow style of fighting, and take Rolls out with a heavy shot to the head.


« Amir Khan urges Joshua: ‘Do not rematch Ruiz next’