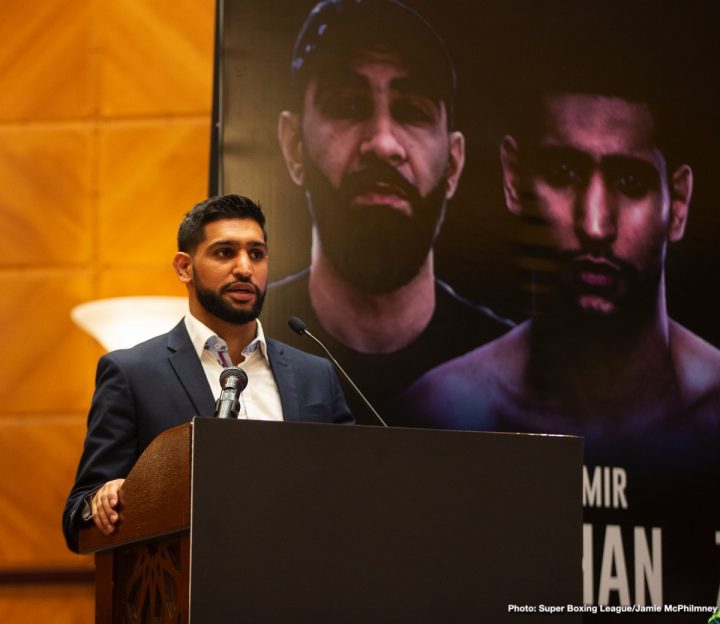 By Charles Brun: Former IBF featherweight champion Billy Dib will step in to replace the injured Neeraj Goyat as the opponent for Amir Khan on July 12 at the King Abdullah Sports City, in Jeddah, Saudi Arabia, according to boxingnewstv. Goyat (11-3-2, 2 KOs) suffered injuries in a car accident, and won’t be able to fight Khan next month on the July 12 card.

There are two things wrong with this fight: Dib is over-the-hill and much too small for Khan at featherweight. It’s a no win situation for Khan. If he beats Dib, no one will care. If he struggles to win, he’ll look even worse. And of course, if Khan loses, then it’s game over.

Billy Dib has fought most of his career at 126

Dib (45-5, 26 KOs), a career long featherweight, recently made a comeback at lightweight earlier this year in stopping journeyman Surachet Tongmala (7-12, 4 KOs) in the first round last April at lightweight. Even then, Dib would still need to move up two weight classes to fight Khan. What this suggests is Khan isn’t taking any chances of him potentially losing the fight. Sadly, Dib is a tremendous upgrade over Goyat, who has zero experience against world level opposition.

Tevin Farmer sent Dib into a brief retirement in beating him by a lopsided 12 round unanimous decision last August. Farmer and Dib were battling for the vacant International Boxing Federation super featherweight title. The scores were 118-108, 119-108 and 120-107. Boxing News 24 had Farmer winning by a 120-107. Dib looked lost in the ring with Farmer.

Some boxing fans are less than pleased with Khan’s replacement opponent Dib, because he was picked from the super featherweight division. At least Dib is a former world champion, albeit one that never beat anyone talented. Dib held the IBF featherweight title from 2011 to 2013. He won the vacant IBF 126 pound title in defeating Jorge Lacierva (41-10-6, 27 KOs) by a 12 round unanimous decision in July 2011. Dib then successfully defended his IBF belt three times in beating Alberto Servidei, Eduardo Escobedo and Juan Antonio Rodriguez. In 2013, Dib lost his IBF title to Evgeny Gradovich in a 12 round split decision defeat.

The fight against Dib is meant to be a stay busy tune-up fight for the 33-year-old Khan. He wants to keep sharp for a potential match against Manny Pacquiao in November. For that fight to take place, Pacquiao will need to beat Keith Thurman on July 20. Pacquiao (61-7-2, 39 KOs) is the underdog against Thurman, and it’s likely that he’ll lose. It’s better for Khan to plan for a different opponent. Even if Pacquiao beats Thurman, he’s not going to be looking to fight Khan. There are too many other options for Pacquiao to fight besides a match against Khan. With a win over Thurman, Pacquiao can fight Errol Spence, Mikey Garcia, Danny Garcia or Shawn Porter. Those are better options for Pacquiao than fighting a shot Amir Khan.

Khan-Dib will be criticized for Khan facing a featherweight

Dib has a big chance to turn his career around

A victory for Dib will rejuvenate his sinking career if only for a brief amount of time. Obviously, Dib isn’t going to be a major player at 126, 130 or 135, because he’s too old and weak. But a win for Dib over Khan will setup some bigger fights for him.