Adrien Broner vs. Lee Selby in negotiations for fall 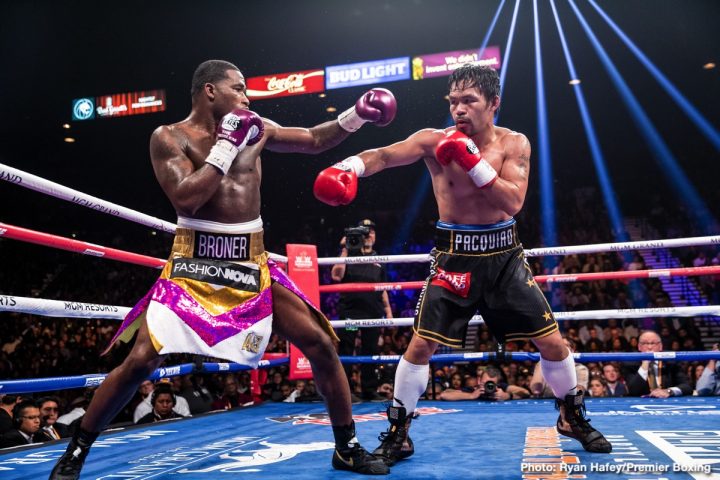 By Kenneth Friedman: Adrien Broner and Lee Selby are in negotiations for a fight in the fall at an undetermined weight on Premier Boxing Champions in the fall, according to Mike Coppinger.

It could be tough for former four division world champion Broner (33-4-1, 24 KOs) if the fight takes place at 140, since he’s struggled badly when trying to get down to that weight since 2016. Three out of the last four fights for Broner have taken place in the 147 pound division.

Selby will have little chance of winning

Asking the 32-year-old Selby to come up all the way to welterweight to fight Broner wouldn’t exactly be a fair fight, although that might not be much of a concern here. Broner, 29, needs a win in the worst way right now, and it looks like Selby is being brought in for him to get a victory. For Broner, it would be his first REAL win since 2016. Broner’s career has been on a downward spiral 2017, and he needs a confidence booster right now. That’s where Selby comes in. He’s the perfect easy mark for Broner to beat and look good against.

Adrien struggling to get wins

Broner is coming off of a one-sided 12 round unanimous decision loss to Manny Pacquiao last January, and he hasn’t won a fight in two years since 2017. ‘The Problem’ Broner has suffered defeats in 2 out of his last 3 fights, and looked horrible of the matches. As I was saying, you can argue that Broner hasn’t won a fight since his victory over Ashley Theophane three years ago in 2016.

Broner’s win over Adrian Granados in February 2017 was a controversial 10 round split decision in his hometown of Cincinnati, Ohio. Boxing News 24 scored it for Granados 97-93. The judges gave it to Broner by the scores 96-94, 97-93 for Adrien, and 97-93 for Granados. What’s interesting about that fight is it was originally scheduled for 12 rounds, and it was supposed to take place at 140.

The week of the fight, the weight was changed to 147 and the rounds reduced to 10. Broner had problems with his weight, which is why the fight took place at 147.

Former IBF featherweight champion Selby (27-2, 9 KOs) has fought most of his career at 126. It was only recently that he outgrew the division, and moved up to 135 for his last fight. Selby looked weak and poor against Omar Douglas at 135 last February at the O2 Arena in London, UK. If Selby had been facing a decent fringe contender at lightweight, he would have been blown out of the water. Douglas was hitting Selby at will, and showing that he doesn’t belong at 135. Had Selby fought a decent fringe contender like Antonio Moran, Felix Verdejo or Denys Berinchyk, it would have likely ended badly for him.

Selby beat Douglas by a 12 round unanimous decision, but he was getting tagged all night by him, and he was fortunate that he wasn’t facing a more talented fighter in the division. It was thought that when Selby moved up in weight from 126, he would stop at 130, and test his boxing skills against the top guys in that division. Going up all the way to 135 shows how hard of a time Selby must have been happening in the last couple of years in making weight at 126.

Lee Selby lacks the size to fight at 140

For some reason, Selby moved up all the way to lightweight [135], and he looked weak in comparison to Douglas. The way Selby fought, he’ll never be a factor in the lightweight division. Selby’s only chance is to move down in weight to super featherweight, and look to see if he can compete with the likes of Gervonta Davis, Miguel Berchelt, Andrew Cancio, Tevin Farmer and Jamel Herring. Don’t hold your breath waiting for that to happen.

If Selby has to fight Broner at 140, he’ll have little chance of winning. At this point, it might not matter to the organizers of the fight. Broner needs a win in the worst way, and Selby, it appears, is being brought in to get him back to his winning ways. A victory for Broner over Selby won’t solve anything for his hemorrhaging career.

Broner is not the same fighter he was six years ago when he was capturing world titles at 130, 135, 140 and 147. Since moving up to 140 and 147, Broner hasn’t looked like the same guy. He’s not fast or skilled enough to compete with the best in those two weight classes. Additionally, Broner’s problems with his weight has made things worse for him.

Retirement might be a good option for Broner if he loses

In choosing Selby as the opponent, Broner will need to think about retiring if he loses to this guy. Getting beaten by Pacquiao, Shawn Porter and Mikey Garcia is excusable, but not against a fighter like Selby. This supposed to be a slam dunk win for Broner. He already was arguably given a gift against Granados in 2017. If Broner can’t even beat a fighter like Selby, then it’s over with for him. Broner won’t be useful as B-side opponent for the fighters at 140 and 147 to shine against, which is basically what his career has been reduced to at this point.

“Sources tell @TheAthleticBOX Adrien Broner and Lee Selby in advanced talks for a fall showdown,” said Mike Coppinger on his Twitter. “If deal complete, contract weight should be interesting. Broner’s last fight at 147, and he’s missed 140 mark (or had it changed during camp) numerous times. Selby last fight at 135.”