Eric Gomez: Canelo will fight GGG when he wants to 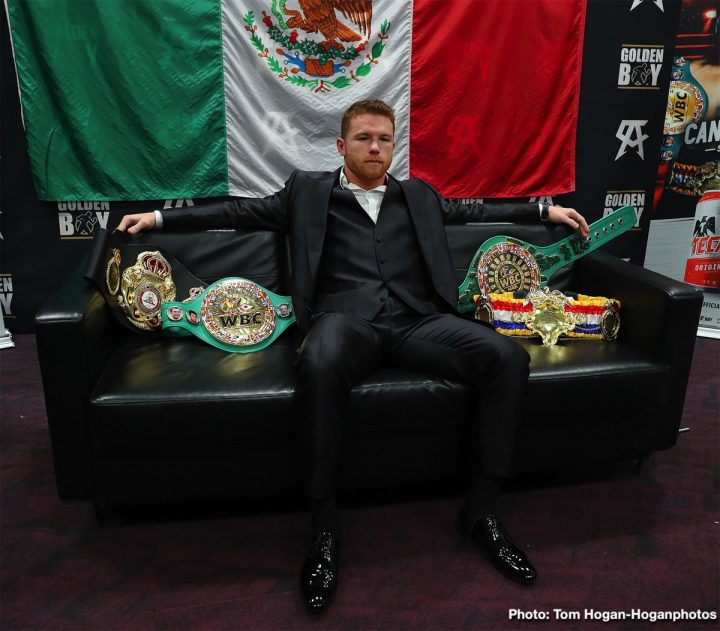 By Aragon Garcia: Saul Canelo Alvarez has more deserving opponents than Gennady Golovkin to fight in his next match in September says Golden Boy Promotions president Eric Gomez. It’s not about money for Canelo. Golovkin wants the trilogy fight outside of Las Vegas, but he’s not in position to dictate where the third fight will take place.

Yes, the trilogy fight with GGG will make IBF/WBA/WBC middleweight champion Canelo (52-1-2, 35 KOs) a lot of money, but the money isn’t much more than what he would get fighting world champions Demetrius Andrade or Callum Smith in September.

Canelo can increase his popularity even more by moving on and defeating Andrade, Callum, Caleb Plant and Sergey Kovalev. Golovkin is old news now. Canelo already showed that he’s better than him in their two fights. For Canelo to keep having to beat GGG, it’s boring to a lot of the fans. Golovkin had his chance, and couldn’t make the adjustments needed to win.

DAZN signed Canelo to an 11-fight, $365 million deal. With two fights out of the way against Rocky Fielding and Daniel Jacobs, Canelo has already made close to $45 million of his contract. Canelo got $15 million for the Fielding fight, and $30 million for the Jacobs unification match, according to Yahoo Sports News. However, there’s not much of a difference between Canelo fighting GGG or someone else.

Golovkin’s decision to fight Steve Rolls earlier this month on June 8 instead of one of the world champions means that the interest from the boxing public in a third Canelo-GGG fight won’t be as much as it would be if he’d fought the likes of Andrade, Callum Smith, David Benavidez or Caleb Plant. Picking Rolls was perhaps the worst thing Golovkin could have done to try and create interest from the casual fans in a third fight with Canelo.

Canelo can pick who he wants say Eric Gomez

“We’re going to do the third fight when Canelo wants to do it,” Golden Boy Promotions president Eric Gomez said to Yahoo Sports News. “Is he interested in it? Of course…There’s no big difference in what he will get paid for a GGG fight than for any other fight. He wants to make history. Canelo’s in the position that he can pick and choose whoever he wants to fight,” said Gomez.

It’s too early for Canelo and Golovkin to fight each other in a trilogy match. GGG has done absolutely nothing to redeem himself after his loss to Canelo last September. If anything, Golovkin hurt his popularity even more by choosing to fight an unknown fighter in 35-year-old Canadian Steve Rolls, and looking less than impressive in beating him on June 8 at Madison Square Garden in New York. It was a wasted opportunity for Golovkin.

First off, Golovkin (39-1, 35 KOs) choosing to face a bottom feeder ranked contender in #15 WBC Rolls was interpreted by boxing fans as a sign that he lacked the confidence to take on a good contender or champion. Secondly, the move made GGG look bad in the eyes of many fans, because he struggled in winning. Rolls nailed GGG with a lot of hard shots as he slowly plodded forward, throwing one punch at a time instead of the combinations that his new trainer Johnathon Banks wanted him to throw.

There’s nothing wrong with Canelo wanting to fight other opponents at this point in his career. He’s fought Golovkin in two out of his last three fights, and it’s time to move on now. Canelo can’t bog himself down fighting GGG for the rest of his career. It’s not Canelo’s fault that Golovkin hasn’t been able to solve the riddle in how to beat him. Perhaps if Canelo fights Golovkin ten more times, he might eventually figure out the right game plan needed for him to win. That’s not practical. This isn’t checkers. This is boxing, and Golovkin has already had two tries and he’s failed. It’s time for Canelo to move on now, and seek out new worlds to conquer.

“For me, it’s done,” Alvarez said about his rivalry with Golovkin. “But if people want another fight, we’ll do it again and I’ll beat him again.’’

For now it is done. Since Golovkin isn’t doing anything to keep the Canelo rivalry fresh by beating talented opposition in between their fights, it’s no longer important for the Mexican star to devote anymore time in fighting him. Golovkin is taking a page out of the playbook of former IBF welterweight champion Kell Brook in just taking easy fights while waiting for a big one.

Brook wants a fight against Amir Khan, but he stopped facing good opposition while waiting for that fight. Golovkin is doing the same thing in trying to get a third fight with Canelo, but not taking risky fights. It looks too much like GGG is trying to cash out instead of continuing to take on the best. Canelo is still taking risky fights against the best, and he’s not asking a lot of GGG to do the same.

There’s nothing in Canelo’s contract with DAZN that says he must fight Golovkin states Wallace Matthews of Yahoo Sports.

“There are guys out there that are probably more deserving at this point than Golovkin,” said Gomez.

Gomez nails it on the head in talking about there being more deserving opponents out there for Canelo to fight than GGG right now. Callum Smith and Demetrius Andrade are both undefeated world champions. They clearly are more deserving for a fight against Canelo than GGG. That’s not to say that Golovkin won’t one day be deserving again for a trilogy match with Canelo, but he’s going to need to get busy fighting the better opposition to prove himself. Right now, it would be Canelo doing Golovkn a favor if he threw a bone and gave him a fight. Canelo doesn’t want that. He wants Golovkin to be worthy of a third fight, and right now he’s not.

Adrien Broner vs. Lee Selby in negotiations for fall »