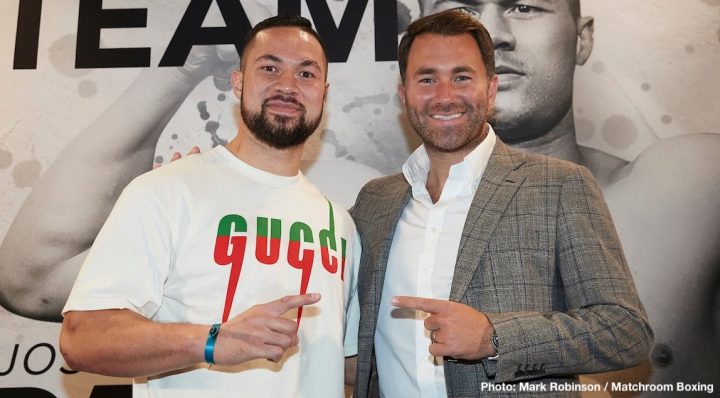 By Tim Royner: Former WBO heavyweight champion Joseph Parker is counting on Andy Ruiz Jr. in looking his way to avenge his only career loss if he’s able to defeat Anthony Joshua in a rematch later this year. Parker (25-2, 19 KOs) defeated Ruiz Jr. (33-1, 22 KOs) by a 12 round majority decision in December 2016 in Auckland, New Zealand.

Since Parker is the only guy to ever beat Ruiz, he thinks the American will be eager to fight him if/when he defeats former IBF/WBA/WBO champion Joshua (22-1, 21 KOs) in November. Ruiz Jr has mentioned wanting to fight Parker again to avenge the loss, but that’s not a fight that is high on his list right now. There’s no money in a rematch with Parker.

The casual U.S boxing fans have never heard of Parker. the American hardcore fan know of Parker from his losses to Anthony Joshua and Dillian Whyte, and lackluster wins over Hughie Fury and Carlos Takam.

Parker has lost two out of his last three fights, and he’s not exactly the most appealing opponent for Ruiz in terms of attracting fans. For Parker to be an option for Ruiz, he’s got to rebuild his career. Facing Alex Leapai isn’t a good start at accomplishing that goal.

Ruiz isn’t going to go back to New Zealand to fight Parker. That option is out.

It would be a mistake on Ruiz’s part to waste time fighting Parker again, because he’s not visible in the United States, and he failed recently when he’s tried stepping it up against good opposition in losses to Anthony Joshua and Dillian Whyte. Moreover, Parker is facing a poor opponent in Alex Leapai this Saturday night on the undercard of the Demetrius Andrade vs. Maciej Sulecki card on DAZN at the Dunkin Donuts Arena in Providence, Rhode Island.

“I think it makes my win look pretty good,” Parker said to skysports.com. “I was able to beat him for 12 rounds and win the decision.”

Parker’s win over Ruiz Jr. 2016 is seen as a non-win by the boxing fans that saw the fight. For the fans that didn’t see it, they’re unaware the fight ever happened. Only the hardcore boxing know of Parker’s fight against Joshua, and they don’t see it as a win. The reality is that Parker gained nothing from his victory over Ruiz other than getting a short stint as the World Boxing Organization heavyweight champion. Parker couldn’t hold onto his WBO title, because he lacked the aggression needed when he fought Joshua in a unification fight last year in Cardiff, Wales.

In a purely passive effort from Parker, he let Joshua fight on the outside for the entire 12 round fight without trying to press the fight to him the way Ruiz did in beating him by a seventh round knockout on June 1.

Matchroom Boxing promoter Eddie Hearn recently signed Parker to his stable, but instead of matching him against a quality opponent for this Saturday, he’s putting him in with 39-year-old journeyman Alex Leapai. This is not the type of opposition that Parker needs to be fighting if he wants to be considered by Ruiz in a rematch. Even if Ruiz wanted to face Parker again to avenge the loss, he couldn’t do it, because he’s not increasing his profile in the United States by facing quality opposition.

“I was able to go 12 rounds with AJ, so I think there’s a little triangle that’s going on at the moment,” said Parker. “I just need to take care of business with the fights that I have coming up and hopefully we can light something up with one of those guys in the future.”

Hearn has a deep stable full of good heavyweights that he could have matched against Parker, but instead he found journeyman Leapai to put him in with for a fight in the United States. That kind of match-making might work elsewhere to impress the casual boxing fans, but it doesn’t work in the U.S. The fans know quality when they see it, and they’re not going to be fooled by Parker looking good against a painfully slow Alex Leapai on Saturday night. This mismatch is worse than the recent showcase fight between Tyson Fury and Tom Schwarz. Parker-Leapai makes the Fury vs. Schwarz look like a great fight in comparison.

Hearn should have matched Parker against one of these fighters:

It’s pretty easy to see why Hearn didn’t match Parker against those fighters, because he’d probably lose to most of them. That’s not a knock on Parker. Its just an indication that he’s a flawed heavyweight, who lacks the aggression to fight at the highest levels of the heavyweight division. In Parker’s loss to Whyte last year, he let the British heavyweight bully him around the ring for the first 11 rounds of the fight.

When Parker finally did show a sliver of aggression in the 12th, he easily knocked Whyte down, and had him on the verge of a knockout. Unfortunately, Parker isn’t an aggressive heavyweight, and he’s likely to continue to lose due to his passive style of fighting. Fighters are born, and not made. Parker lacks the warrior instinct for the fight game in this writer’s opinion.

Hearn will likely push hard for Ruiz vs. Parker rematch

Now that Hearn has signed Parker to his Matchroom Boxing stable, he’ll likely continue to match him against guys on the same level as Leapai until he can lure Ruiz to defending against him. It’ll be a woeful fight in terms of fan interest from American fans, but that won’t stop Hearn from still making it. After all, Parker will give Hearn another chance to try and recapture the IBF/WBA/WBO heavyweight titles. If Parker were to beat Ruiz in the rematch, then Hearn immediately setup a Joshua-Parker rematch in order to try bring Joshua’s lost world titles back to him.

A lot of things would need to go in Hearn’s favor for Joshua to win back his titles, and it’s unlikely to happen. If Ruiz does fight Parker again, he’ll almost surely beat him, because the fight would take place in either the U.S or Mexico instead of New Zealand like last time they fought.

Obviously, Hearn won’t match Parker against Hunter, Allen or Hrgovic, because he could lose to all of them. Parker is more advanced than those fighters right now, so Hearn isn’t going to take a risk of having him lose to one of them. It’s all about Hearn trying to get a rematch between Parker and Ruiz right now. Again, that’s a fight that will attract no interest in the U.S. If Ruiz gets past Joshua, the fighters that he’ll be targeting is World Boxing Council champion Deontay Wilder, Tyson Fury and Adam Kownacki. There’s more interest from the U.S fans in seeing Ruiz fight those guys than for him to face a fighter that has lost 2 out of his last 3 fights in Parker.