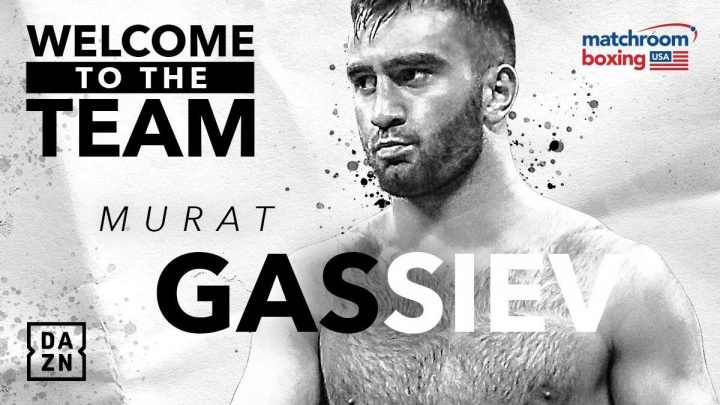 By Charles Brun: Murat Gassiev will be fighting the hard hitting Joey Dawejko on July 27 on the undercard of Maurice Hooker vs. Jose Carlos Ramirez on DAZN in Arlington, Texas, according to Steve Kim. This will be former IBF/WBA cruiserweight champion Gassiev’s heavyweight debut. Gassiev (26-1, 19 KOs) is being matched tough right off the bat in a sink or swim fight against the heavy-handed 28-year-old Dawejko (19-7-4, 11 KOs).

This could be a mistake for Gassiev’s new promoters at Matchroom Boxing USA to put him in with a knockout puncher like Dawejko right off the bat. You’ve got to respect Matchroom for making the fight, but Dawejko could make Gassiev’s stay at heavyweight short, harsh and brutal.

Dawejko rumored to have dropped Anthony Joshua in sparring

There are rumors floating around that Dawejko knocked down former IBF/WBA/WBO heavyweight champion Anthony Joshua in sparring this week before his knockout loss to Andy Ruiz Jr. last Saturday night. The initial rumor was that Dawejko knocked out Joshua. Now it’s that he dropped Joshua, and was

“Rumors floating around that Joey Dawejko dropped AJ in sparring (not KOed, mind you) and that he was contacted and told not to say anything. Now, he’s appearing on Matchroom card, per Kim,” said Mike Coppinger on his Twitter. “I’m not reporting that Dawejko definitely dropped him; only those there would know. But the rumor is that he was told not to post video or say anything, as he shouldn’t since sparring is confidential.”

It’s interesting what Coppinger says about Dawejko rumored to have been told not to say anything to the media about the much talked about knockdown of Joshua that may or may not have happened. Obviously, it looks a little funny with Dawejko all of a sudden fighting on a Matchroom promoted card on DAZN. Some boxing fans will speculate about the timing of Dawejko fighting on a Matchroom card after the rumors of him knocking Joshua down, and the rumors of him being told not to speak about the knockdown. None of it matters now.

There are literally tons of boxing fans that believe the rumors that Joshua was dropped by Dawejko, whether it happened or not. If it did happen, Matchroom might as well let it out in the open about Joshua, because it’ll give him another excuse to tell fans. Joshua can blame his loss to Ruiz Jr. on the sparring with Dawejko. That would be hilarious, and pathetic at the same time.

Joey Dawejko will be coming into his fight with Gassiev with a three-fight losing streak. Dawejko’s losses have come against these three fighters:

Dawejko lost a close 10 round majority decision to Kuzmin on March 9 in Verona, New York. The judges scored it 96-94, 96-94 and 95-95. Boxing News 24 had the fight even at 95-95. Neither guy did enough to win. Gassiev looks to be on the same level as Kuzmin, but a little less busier. Dawejko has a decent chance of winning this fight if he can use his jab a lot, and outwork him the way Oleksandr Usyk did in the final of the WBSS cruiserweight tournament last July.

There could be some ring rust for former IBF/WBA cruiserweight champion Gassiev when he enters the ring to face Dawejko on July 27 in Arlington, Texas. The last time the 25-year-old Gassiev fought was in a losing effort to Usyk 11 months ago. Coming off that long of a layoff is going to be hard enough for Gassiev. But for him to have to face a fighter like Dawejko, it’s going to be difficult.