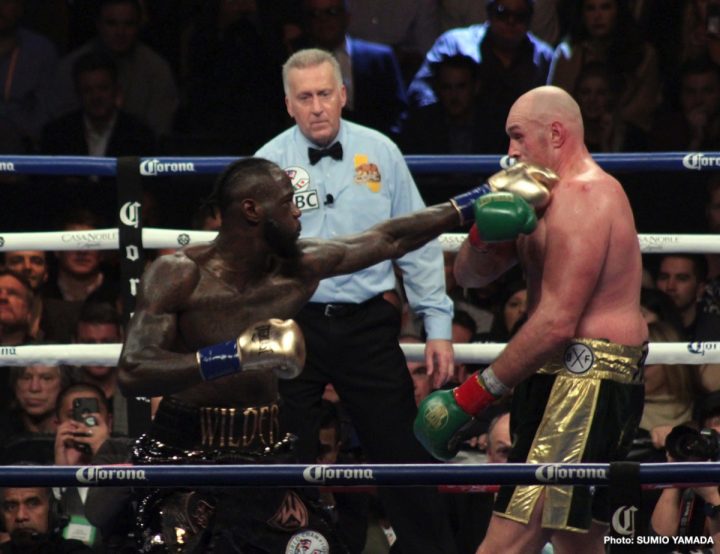 By Scott Gilfoid: Ring Magazine has restored Tyson Fury to the #1 heavyweight in their world rankings after Anthony Joshua’s upset loss to Andy Ruiz Jr. last Saturday night. The Ring panel voted the unbeaten Fury (27-0-1, 19 KOs) as their #1 heavyweight despite the fact that he failed to defeat WBC champion Deontay Wilder last December.

Does Fury deserve a #1 ranking off of a draw against Wilder?

You can argue that Ring Magazine has really lowered the bar in ranking guys at number 1. Fury gets the top ranking after beating two lower level heavyweights in Francesco Pianeta and Serfer Serferi, and then getting a draw against Deontay Wilder. Where’s the love for newly crowned IBF/WBA/WBO champion Andy Ruiz Jr? He just beat the guy that Ring Magazine had as their number #1 heavyweight in Anthony Joshua. Why on earth didn’t Ring Magazine replace Joshua with Ruiz Jr? That’s the logical question, isn’t it? Is it because Ruiz is kind of chubby? It would be interesting to know why Ruiz Jr. isn’t the number one heavyweight, because he should be now that he’s beaten Joshua. Ruiz holds three of the four heavyweight titles now. Why is #3 in Ring Magazine’s list instead of #1? It makes no sense.

“Big shout out to Ring Magazine for doing the right thing, putting the ‘Gypsy King’ right back at the top of the heavyweight division. You’re doing a great job there, guys,” said Tyson Fury on his social media.

Tyson Fury doesn’t make this writer’s top 10 list due to his lack of wins over quality opposition since he made his comeback. Sorry but Pianeta and Seferi aren’t good enough fighters for Fury to make the top 10 among the best heavyweights in the division. You can’t count Fury’s 12 round draw against Wilder, because it wasn’t a victory and he was basically knocked out. The referee Jack Reiss gave Fury a tremendous break by not stopping the fight in the 12th round. As such, that’s not a victory for Fury to be vaulted into the #1 spot in the rankings at heavyweight. It’s basically a loss, but the referee that worked that fight gave Fury a huge break by not stopping the fight.

Fury gave it a good go against Wilder, but was knocked down twice in the championship rounds of the contest. Given the way Fury was knocked down in the 12th, it’s difficult to see him as anywhere close to being #1. Of course, these rankings mean nothing. They’re subjective stuff, and have no bearing on the world rankings. Fury will get a shot to try and prove that he belongs at the top in early 2020 in a rematch with Wilder. It’s quite possible that he’ll be knocked out again by Wilder, but this time the referee will stop the fight.

In Fury’s next fight, he’ll be facing Tom Schwarz on June 15 at the MGM Grand Garden Arena in Las Vegas, Nevada. Schwarz (24-0, 16 KOs) is viewed by many boxing fans as a soft touch brought in by Fury’s promoters to make him look better than he actually is. Top Rank, the new co-promoters for Fury, are trying to turn him into a star in the U.S. Feeding Fury a weaker heavyweight with no punching power and no wins of substance on his resume is what they’re hoping will help turn him into a star in the States.

It’s highly unlikely that will work unfortunately. The days of promoters turning fighters into stars after feeding them dreadful opposition is long past. The boxing public has wizened up, and knows when a fighter is being matched in showcase [mismatch] fights to make them look better than they actually are. A better move for Top Rank would have been to match Fury against someone like Joe Joyce, Dillian Whyte, Tony Yoka, Kownacki, Povetkin, Pulev, Parker or Ortiz. At least Fury would prove something by beating one of those guys.


« Amir Khan vs. Neeraj Goyat to have special guest on July 12