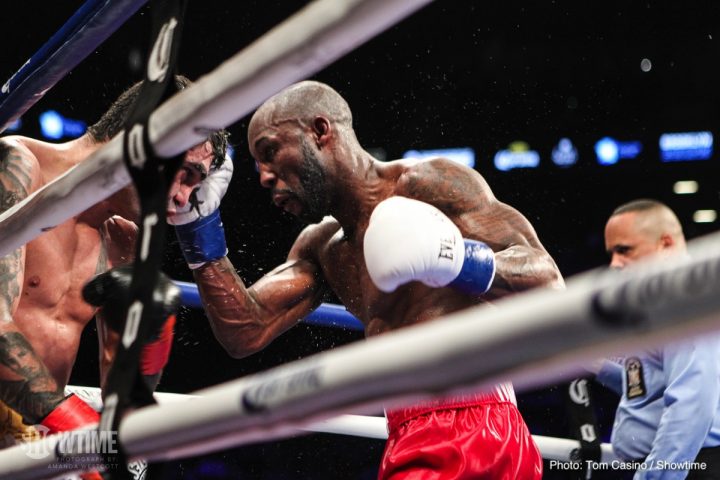 By Dan Ambrose: The talented Yordenis Ugas will be battling former WBC lightweight champion Omar Figueroa Jr. in a WBC welterweight title eliminator on the undercard of Manny Pacquiao vs. Keith Thurman on July 20 on Fox Sports Pay-Per-View at the MGM Grand Arena in Las Vegas, Nevada. The Ugas vs. Figueroa Jr. fight hasn’t been made official yet, according to Dan Rafael, but it’s expected to. It’s a great fight for the card.

Yordenis Ugas getting a second chance

Figueroa, 29, recently beat John Molina Jr. by a questionable 10 round unanimous decision last February in Los Angeles, California. A lot of boxing fans thought Molina, 36, had done enough to rate a win in the fight. The judges scored it for Figueroa Jr. by the scores 99-91, 98-92 and 97-93.

In another interesting fight on the pay-per-view portion of the Pacquiao vs. Thurman card, former IBF light welterweight champion Sergey Lipinets (15-1, 11 KOs) will be taking on the hard hitting two-tie world title challenger John Molina Jr. (30-8, 24 KOs) in a fight in the 147-pound division.

This is going to be a tough fight for Molina Jr. to be taking on the heavy-handed 30-year-old Lipinets, who is coming off of a career best 10th round knockout win over former two division world champion Lamont Peterson on March 24 at Oxon Hill, Maryland. Lipinets looks so much better fighting at welterweight compared to when he was boiling down to fight in the 140-pound weight class. Lipinets lost his IBF light welterweight title to Mikey Garcia last year in March in a fight that was a lot closer than the scores handed down by the judges.

Lipinets was landing the much harder shots in each round. Mikey threw a lot of nice combinations, but they had nothing on them in comparison to the hard punches that Lipinets was landing throughout the fight. After the match was over, Mikey’s face was badly swollen and bloody. Mikey looked like the clear loser in the fight. This writer had Lipinets winning the fight. The judges gave the decision to the A-side fighter Mikey, but a lot of boxing fans felt that Lipinets deserved the win. Mikey revealed recently that Lipinets hits harder than Errol Spence Jr. That doesn’t mean that Mikey thinks Lipinets would beat Spence. He just thinks he hits harder.

Molina Jr. is still dangerous at 36. He’s never been a speed guy, so getting hasn’t hurt his game the way it does with fighters that thrive on their hand speed during their youth. Molina is more of a power guy. He looked excellent in stopping Ivan Redkach in the fourth round in December 2017. Molina Jr. didn’t fight in 2018 for some reason. It’s too bad because he needs to stay busy with his career.

Beamon vs Saludar, Crowley vs Mansouri in Cleveland on June 22 »