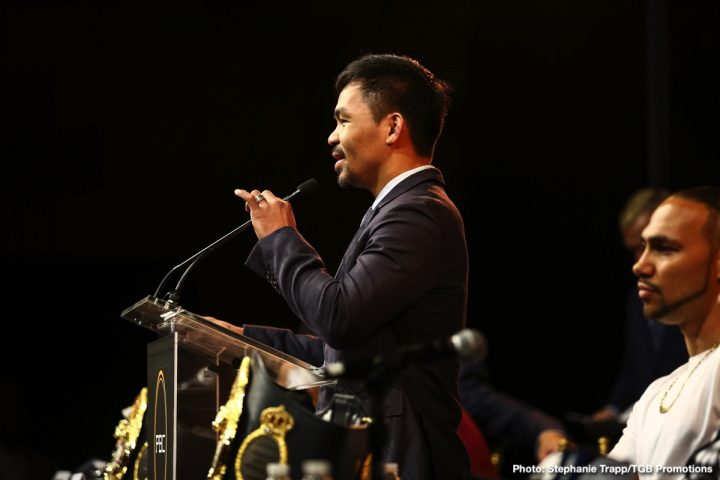 By Aragon Garcia: Keith ‘One Time’ Thurman and Manny Pacquiao met up for the second of their two-city press tour on Wednesday in Los Angeles, California to talk about their July 20th fight on Fox Sports pay-per-view at the MGM Grand Arena in Las Vegas, Nevada. Like at their kickoff press conference on Tuesday in New York, Thurman made it clear that Pacquiao’s career will end on July 20th.

Thurman feels the 40-year-old Pacquiao needs to retire and focus on his job as a senator in the Philippines. Thurman says that with Pacquiao and Floyd Mayweather Jr. gone from the sport, it’ll leave him, Errol Spence Jr., Danny Garcia and Shawn Porter as the main guys in the 147-pound division.

During Wednesday’s news conference, Thurman went overboard with his comments in comparing Pacquiao’s movement to that of a “bunny rabbit”, and saying that he’s going to “crucify” him on July 20th. Those remarks from Thurman didn’t go over well with the media.

“I’m not going to lose to this bunny rabbit,” Thurman said.

Thurman was referring to Pacquiao’s movement reminding him of a bunny rabbit. Thurman says he’s going to confuse Pacquiao with his own movement in this fight. If Thurman is serious about wanting to use movement to confuse Pacquiao, then it means he likely won’t be able to knock him out like he wants to. For Thurman to have a shot at stopping Pacquiao, he’ll need to stand in the pocket and let his hands go with power on his shots.

“We’re going to come up with a great game plan and destroy you,” Pacquiao’s trainer Freddie Roach said about Thurman.

Pacquiao will have his long time trainer Freddie Roach working with him once again along with Buboy Fernandez. Roach is a master at putting together great game plans. It should be interesting to see what ideas Roach comes up with. He’s not infallible. Roach sometimes fails to come up with the right plan, but most of the time he does. As long as Thurman doesn’t rough Pacquiao up like Jeff Horn did in 2017, he should have a better than average shot at winning.

“Most of the opponents can easily say before the fight that I’m an easy opponent,” Pacquiao said. “The thing is, when we get in the ring, it will change. What he’s saying is going to give me more motivation. At 40, I feel like I’m 29. I chose Keith Thurman [over Errol Spence Jr.] because he can make more action in the fight,” Pacquiao said.

Pacquiao looked more motivated during Wednesday’s news conference than he did for all the press conferences combined for his last fight against Adrien ‘The Problem’ Broner last January. Thurman is saying all the right things to get Pacquiao motivated for this fight. All the talk from Thurman about wanting to retire Pacquiao has the Filipino star looking energized. It’s been a while since someone trash talked Pacquiao like that. You’ve got to go back years to when Pacquiao fought Ricky Hatton and Oscar De La Hoya to where he had to deal with some trash talk. Thurman doesn’t look like he’s kidding though. He seems like he really wants to end Pacquiao’s career. That would be a feather that Thurman could stick into his cap and tell his boxing fans for the remainder of his career. If Thurman is the one that retired the great Pacquiao, it would be something that he could talk about for the rest of his life. It means something to Thurman to be the one that ends the career of Pacquiao.

“Manny Pacquiao is a little guy,” Thurman said. “I believe I would have destroyed Manny Pacquiao give years ago when he was with Top Rank.”

Thurman has the size advantage and then some over the 5’6 1/2″ Pacquiao. It’s not so much the height advantage that Thurman has over Manny that is so dramatic. It’s the weight and the difference with their frames.

Thurman then said this in response to Pacquiao:

“You didn’t beat them all. Seven losses, but okay,” Thurman said in responding to Pacquiao.

Pacquiao has beaten a lot by guys, but not so many bigger fighters than him. The only guys that beat Pacquiao that were bigger than him were Floyd Mayweather Jr. and Jeff Horn. The loss to Horn was a controversial one in 2017, as it took place in the Australian fighter’s hometown of Brisbane, Australia. Horn got away with a lot of fouling, and the scoring for the fight looked off. Pacquiao fought well enough to deserve the win in that fight.

“I think experience is very important for this fight,” Pacquiao said. “I want him to experience losing.”

The experience that Pacquiao has could help him, but not necessary. Pacquiao has taken a lot of punishment over the years, and there’s some wear and tear there. Thurman, 30, is 10 years younger than the 40-year-old Pacquiao, and that could factor into the results for the fight.

“I’m going in there to trip him up. He’s going to be hopping over here, and hopping over there,” Thurman said about Pacquiao. “I know he likes to quote bible verses. He’s getting crucified.”

Thurman is already letting the fans and Pacquiao know that he’s going to use a lot of movement in the fight to get from getting hit. The might not be as entertaining as the boxing public would like for it to be if Thurman uses his circular movement. In Thurman’s fights with Danny Garcia and Shawn Porter, he was literally running at times to keep them from being able to get to him to and their shots. Thurman should think twice about doing that against Pacquiao, because the fight is on FOX Sports PPV, and the fans are going to be expecting a lot more for him due to that reason, as well him being younger, bigger and more powerful.

“My opponent can say I’m an easy opponent, but when he gets in the ring, he will see,” Pacquiao said. “Keith Thurman, he likes to be aggressive. I’m hoping on July 20th that he will stand and do what he says, and fight toe-to-toe with me.”

Thurman will be aggressive up to a point. If he start taking hits, then he’ll get on his bike and stay on the outside. Even against Robert Guerrero, Thurman wasn’t willing to stay in the pocket against him. It won’t be any different with him facing Pacquiao. Thurman will be careful, and make sure that he doesn’t get hit too much in the fight. It’ll be more entertaining if Thurman stands and fights, but he doesn’t do that. Once Thurman starts getting hit, he tends to use a lot of movement.

“I’m destroying the legacy of Manny Pacquiao. On July 20th, my legacy begins. I’m respectfully going to kick the s—t of him,” Thurman said.

Thurman got the the last word in with his over the top remark about wanting to beat him up on July 20th, and ruining his legacy. It probably won’t hurt Pacquiao’s legacy if he loses. The great Roberto Duran’s legacy wasn’t ruined despite the fact that he lost a number of times when he got old.