Thurman says he’ll probably retire if he loses to Pacquiao 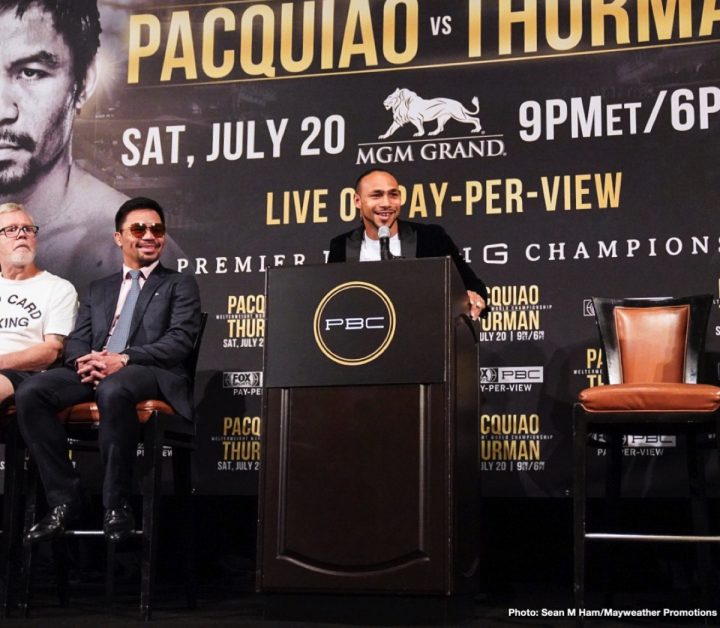 By Mark Eisner: WBA Super World welterweight champion Keith ‘One Time’ Thurman (29-0, 22 KOs) say he might hang up his gloves and walk into the sunset if the 40-year-old WBA secondary welterweight champion Manny Pacquiao (61-7-2, 39 KOs) defeats him in their fight on July 20 at the MGM Grand Arena in Las Vegas, Nevada.

Although Thurman says he doesn’t envision Pacquiao being able to knockout him out in this fight, but if it does happen, then he could retire from boxing and into commentating.

Thurman sees things going the opposite way, however, with Pacquiao being the one that winds up retires after he defeats him on the 20th of July on Fox Sports Pay-Per-View.

You can make an argument that Thurman has ALREADY been retired for two years from 2017 to 2019. He just came back against Josesito Lopez last January, and looked like a fraction of the fighter that he once was. Thurman claims that it was a situation where he had some ring rust on him from being out of the ring for two years. Thurman expects for him to be 100% back when he faces Pacquiao on July 20. Thurman already talking about retirement furthers the opinion of a lot of fans have about him, that his mind is no longer in the sport. They think Thurman is just going through the motions at this point, and he merely came back just for the payday. Thurman’s performance against Lopez was that of a fighter that doesn’t belong at the elite level at 147. He wasn’t at the elite level. If Thurman is correct about it being a case of ring rust that impacted his performance against Lopez, then he’s going to need to major improvement against Pacquiao for him to be where he was two years ago. The thing is, Thurman from 2017 won’t be able to hang with the likes of Errol Spence Jr. or Terence Crawford. Those guys both beat the Thurman that struggled to defeat Danny Garcia in March 2017.

Thurman stopped then 36-year-old former WBO welterweight champion Carlos Quintana (29-4, 23 KOs) in the fourth round in November 2012. However, Quintana had already been stopped two years earlier by Andre Berto in an eighth round stoppage in 2010, and before that, he had been knocked out in the first round by Paul Williams in 2008. Thurman didn’t accomplish all that much in stopping Quintana, because it was clear four years earlier that he was done as a fighter.

“Manny Pacquiao is a legend, but I don’t believe he belongs at the top of 147 today,” Thurman said. “Not against me, not against Errol [Spence], not against [Terence] Crawford, not against Shawn [Porter], and not against Danny Garcia.”

Thurman might be right about Pacquiao not belonging at the top of the 147-pound division. Pacquiao didn’t look like he belonged at the top of the division in his last fight against Adrien Broner last January. Pacquiao looked slower than he’d been in the past. Both his hands and his feet are considerably slower when he fought Oscar De La Hoya in 2008. Pacquiao is heavier. He’s not as light as he was when he fought De La Hoya. Being lighter enabled Pacquiao to move better and throw with more speed. It’s unlikely that Pacquiao can get his weight down to where it was when he fought De La Hoya 11 years ago. The hand and foot speed that Pacquiao has lost won’t return. At the same time, Thurman isn’t an elite level fighter that belongs at the top of the division either. You can’t put Thurman in the same class as Spence and Crawford off of the way he looked in his last fight against Josesito Lopez. Thurman has lost hand speed, and his conditioning isn’t what it needs to be for him to compete against the best at the elite level at 147.

“It doesn’t offend me. It gives me more motivation,” Pacquiao said about Thurman making comments about wanting to retire him. “I like that. I’ve already started training in the Philippines. Right now boxing is my passion. I’m not Oscar De La Hoya,” Pacquiao said about Thurman comparing his situation now to where De La Hoya was in 2008 when he fought him.

As long as Pacquiao has some thick skin about Thurman’s insults, he should be fine, because he intends on talking retirement for the Filipino star until the moment the two step inside the ring. Thurman wants Pacquiao to question himself, get depressed and train and fight at less than 100%. Thurman is trying an psychological trick in which a fighter downgrades their opponent so much that their self-esteem erodes, and they don’t fight and train as hard as they need to for them to do well.

“He’s got to say something. There’s no story about how great he looked in his last fight,” trainer Freddie Roach said to Fighthub about Thurman’s performance in his last fight against Josesito Lopez last January. “It’s just bull-s—. Who cares what he says? He sucked [against Josesito Lopez]. Come on, there’s no better word. He was terrible,” Roach said about Thurman.

Roach hits it on the head in talking about how Thurman looked terrible last January against Josesito Lopez. He was awful in that fight. Thurman saying about doesn’t belong at the elite level is hypocritical on his part, because his last performance against Lopez showed clearly that he doesn’t belong with the best anymore. If Thurman can’ get back to the level that he once was at, then the game has passed him by. When an athlete is starting to get old, and they’ve been out of action for two or more years, they lose a lot from their game and are never the same again. It’s difficult for fighters to come back after they’ve been out of the ring for a long time. What makes it harder for Thurman is he gained a lot of weight when he was inactive. He clearly wasn’t exercising the way he should have been when he was inactive.