Hearn: ‘Joshua vs. Wilder MUST happen next’ 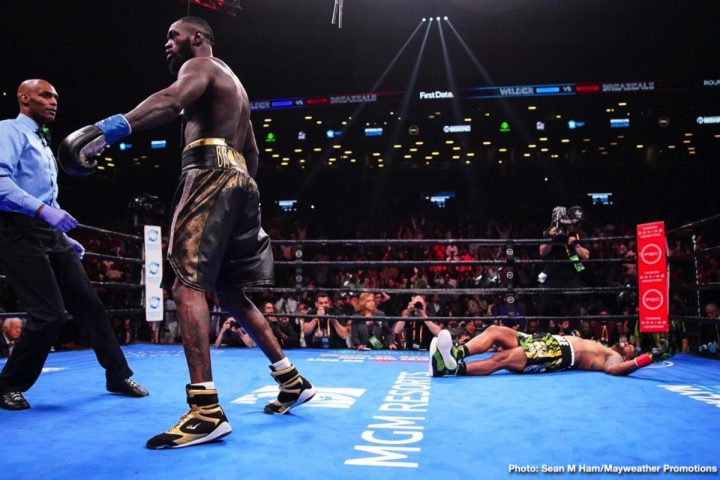 By Mike Smith: Matchroom boss Eddie Hearn is keen on making the Anthony Joshua vs. Deontay Wilder unification fight more than ever after witnessing the ‘Bronze Bomber’ Wilder’s crushing first round knockout win over mandatory challenger Dominic Breazeale at the Barclays Center in Brooklyn.

Hearn liked what he saw from the unbeaten WBC heavyweight champion Wilder (41-0-1, 40 KOs), who produced a much better performance than in his previous fight against Tyson Fury last December. It was a different type of opponent, of course. Breazeale was willing to fight. Fury wasn’t.

Hearn can’t afford to get too ahead of himself right now, as Joshua (22-0, 21 KOs) still need to successfully defend his IBF, WBA and WBO heavyweight titles against Andy Ruiz Jr. (32-1, 21 KOs) on June 1 next month before a fight between him and Wilder can start getting talked about in serious terms. There’s a great deal of interest in a Joshua vs. Wilder fight, but right now it’s still premature for Hearn to start talking up the fight until AJ takes care of business against Ruiz Jr., who has fast hands, and can punch.

“The fight with AJ and Wilder is the biggest fight in the sport and all being well in two weeks’ time it must happen next – no excuses, this is the fight that will change the sport globally,” Hearn said to skysports.com. “It’s a legacy fight and AJ wants it so bad. Two big, fast, dangerous and fearless world heavyweight world champions that can turn the lights out with a blink of the eye – it’s a must.”

The money split will be the issue that makes or breaks the negotiations for the Joshua vs. Wilder fight. Hearn has come up with all kinds of offers that favored his fighter Joshua in the last two years. In the beginning, Hearn’s offers to Wilder were embarrassingly low, but they’ve been slowly edging closer to the 50-50 deal that he wanted all along. Hearn likely still isn’t willing to give Wilder the deal that he wants unfortunately. Being tight-fisted will keep the Joshua-Wilder fight from getting made until Hearn sees the light.

The way the Joshua vs. Wilder fight has been building, Hearn and Wilder’s management will probably choose to let it marinate longer before they make the match. In the meantime, Wilder will be defending his WBC title against the likes of Luis Ortiz in the fall, Adam Kownacki in the spring, and then Tyson Fury after that. Joshua is a possibility for Wilder in the second half of next year if everything goes right. Those are all good fights for Wilder. Joshua will likely wind up defending against his IBF mandatory Kubrat Pulev in the fall, and then his WBO mandatory, which will soon by Oleksandr Usyk, in the spring. Dillian Whyte will continue to be an option for Joshua simply by the fact that he’s one of Hearn’s fighters in his Matchroom Boxing stable.

Hearn needs to be careful before matching Joshua with Wilder

While Hearn seems excited about putting the Joshua vs. Wilder fight together right now after watching last Saturday’s blowout win by Deontay, he needs to realize that Joshua could wind up in the same position a Breazeale was in getting knocked out by Wilder. It might be better for Hearn to take his time before he makes the Joshua vs. Wilder fight. Wilder’s easy first round knockout win over Breazeale showed that he’s more athletic than Joshua, and he obviously has better punching power. I mean, it took Joshua seven rounds to knockout Breazeale in 2016, and that was against a more flawed version. Breazeale has improved in the last three years. Wilder’s ring IQ is on another level right now. Joshua doesn’t seem to be as clever as Wilder, and he mostly fights like a painter painting by the number system than a fight with an Olympic gold medal in his past.