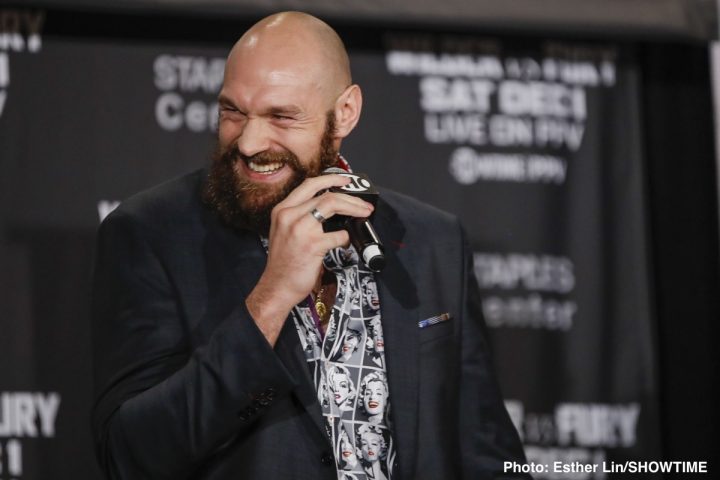 By Charles Brun: In response to the WBC president Mauricio Sulaiman saying he wants Tyson Fury and Dillian Whyte to fight a WBC heavyweight title eliminator for the interim belt, Fury says he’ll agree to take the fight with the 31-year-old Whyte but ONLY if the WBC Diamond title is on the line, not the interim strap that. The WBC will reportedly have their Board of Governors make a decision soon on Fury’s offer to fight Whyte for the Diamond title, according to Michael Benson.

Fury doesn’t need Whyte to get rematch with Wilder

The winner of the Fury vs. Whyte fight will be the mandatory for WBC heavyweight champion Deontay Wilder. What’s hard to understand is why Fury would want to fight Whyte (25-1, 18 KOs) in an eliminator to get the rematch with Wilder, when he already turned down the fight for May 18. Fury will be getting the rematch with Wilder (40-0-1, 39 KOs) without having to fight in an eliminator. Wilder wants the rematch with Fury, and the WBC already ordered it recently. For Fury to face Whyte for the Diamond belt, it would be unnecessary step he would be taking to get the second fight with Wilder.

Fury said this on his social media in accepting the fight with Dillian Whyte, as long as the WBC has their Diamond heavyweight title on the line for the fight:

”I just want to say a special message to the WBC, who supported me in my comeback and were very fair to me over the years. I recently saw your quote about about me fighting for the interim title against Dillian Whyte, and I’m very thankful for the opportunity. What I suggest is because I beat Deontay Wilder, and we all know what happened. I didn’t get the decision, but I still won and the world knows, I propose that we make me and Dillian Whyte fo the WBC Diamond title, and not the [WBC] interim belt. I’ll take care of Dillian Whyte, and I’ll knock him out in six rounds. I accept the challenge. Thank you very much. I’ll fight Dillian Whyte every day of the week and twice on Sunday. WBC, make it for the Diamond belt, not the interim version, and you’ve got a deal. Let’s get it on!”

Fury (27-0-1, 19 KOs) has impressed a lot of boxing fans on social media by agreeing to fight Whyte. Wilder seemingly wants nothing to do with facing the hard hitting Whyte, who is viewed as being more trouble than he’s worth. For Fury to willingly take the fight with Whyte, it shows a lot of courage on his part in agreeing to take the fight.

Whyte said this in response to Fury accepting the WBC’s order to face him:

“Let’s do it then, Tyson Fury. I’d fight you anytime, anywhere, seven days a week and five times on Sunday I look forward to putting you to sleep. Let’s go baby.”

Whyte is facing unbeaten #10 WBC Oscar Rivas (26-0, 18 KOs) on July 20 on Sky Sports Box Office on July 20 at the O2 Arena in London, England. Whyte’s promoter Eddie Hearn of Matchroom Boxing has been saying to the media in the last two weeks that he’s very confident that the WBC will make the Whyte vs. Rivas fight an official eliminator for their WBC heavyweight title, and they’ll order Wilder to face the winner in his next fight. If that’s the case, then there’s no point in Whyte facing Fury for the WBC Diamond heavyweight title next. Why would Whyte want to risk his mandatory position by facing Fury? That would be a bad move on Whyte’s part. Of course, it’s not looking good for Whyte or Hearn that the WBC will agree to have the Whyte-Rivas fight as an eliminator for the mandatory position to face Wilder. The problem is, Whyte already turned down the WBC when they ordered him to fight Luis Ortiz in an eliminator to fight Wilder. When a fighter turns down eliminators, as Whyte did with the WBC, he can’t expect the sanctioning body to make him the mandatory based on him and his promoter selecting the opponents that they want to select. When a fighter is able to pick and choose who he wants to fight in official eliminators, it makes a mockery of the sanctioning bodies. Whyte and Hearn might not realize that, but unfortunately what the main problem is.

The WBC Diamond title was created in September 2009, and it’s used as an “honorary championship” for fights involving talented fighters at the elite level, according to Wikipedia. The Diamond belt is for “historic fights between two high-profile and elite boxers.” Fury vs. Whyte is a good fight, but it’s difficult to say that it’s a match worthy of the Diamond title. It’s NOT a historic fight. Fury is coming off of a draw against Wilder, and Whyte has been facing journeyman level fighters for the most part in Lucas Browne, Dereck Chisora and Robert Helenious lately. He’s only fought one good guy in Joseph Parker, and the referee tainted his win over Parker by blowing an important knockdown call in the second round.

Top Rank promoter Bob Arum said on Monday that Fury will be fighting in September in the East Coast against an opponent still to be determined. Fury’s next fight is on June 15 against German heavyweight Tom Schwarz (24-0, 16 KOs) on ESPN+ at the MGM Grand in Las Vegas, Nevada. With only three months separating the June 15th date and his next fight in September, it’s highly unlikely that Fury will be fighting a good heavyweight like Whyte. Arum says Whyte is a possibility for Fury’s fight in September, but he also said he might not get the fight. Arum won’t want to risk Fury losing before he faces Wilder and Anthony Joshua in big money fights. Whyte is a risky proposition for Fury. If he loses to Whyte, then all that money that Top Rank is paying him would be a waste. Fury would still likely fight Joshua and Wilder in the future, even if he were to lose to Whyte, but the interest from U.S boxing fans in those fights wouldn’t be nearly as much as it would be if Fury were to come into those matches without having recently lost.

Even if Fury and Whyte are serious about wanting to face each other, the network and promotional issues could prevent the two of them from fighting each other for the WBC Diamond belt. Fury is with Top Rank, and fights on ESPN. Whyte is signed with Eddie Hearn’s Matchroom Boxing, and his bouts are shown on Sky Box Office in the UK, and will soon likely be shown on DAZN in the U.S.