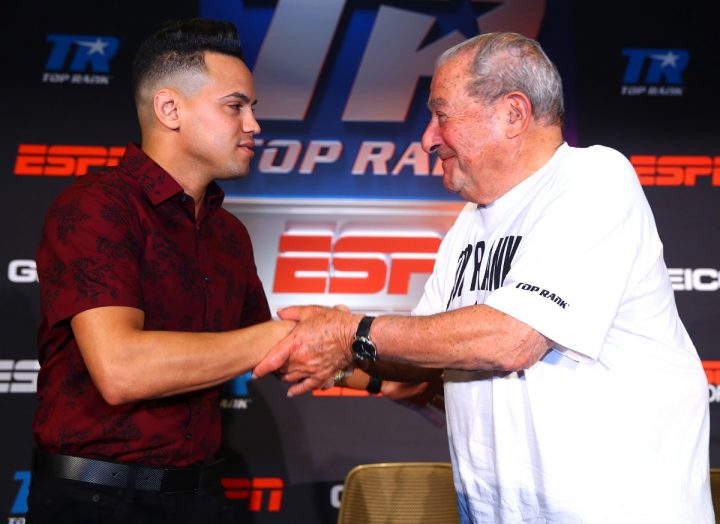 By Sean Jones: Super talented two-time Cuban Olympic gold medalist has now officially signed a promotional deal with Top Rank to fight in the United States. The news was announced by Top Rank on Friday, revealing that they have signed the 25-year-old Ramirez to a multi-fight deal.

Ramirez will be fighting at featherweight. During Friday’s news conference with Top Rank boss Bob Arum, Ramirez looked a little heavy. He’ll need to get in shape before he starts his pro career, because he doesn’t look ready right now to start fighting.

This is a major signing by Top Rank, as it gives them one of the best amateur fighters in the world. Ramirez swept through his competition in winning gold medals in the 2012 and 2016 Olympics. The only fighter that gave him any real competition during those Olympics was Shakur Stevenson in 2016, but even in that fight, Ramirez made it clear that he was the better fighter of the two.

A year ago in July, Ramirez left the Cuban national team when they were training in Aguascalientes, Mexico. Ramirez made his way to the U.S, and officially defected from Cuba. With the potential to make millions fighting in the U.S, it’s not surprising that Ramirez defected and came to the U.S. With his kind of talent, any promoter worldwide would have jumped at the chance to add him to their team.

With the signing of Robeisy Ramirez, Top Rank adds their second two-time Olympic gold medalist to their stable of fighters. The other two-time Olympic gold medalist, Vasiliy Lomachenko, has been quite success since turning pro six years ago in 2013 at the age of 25. Lomachenko was the same age as Ramirez is now when he turned pro, and Top Rank didn’t hold him back from fighting the best right away. In his second pro fight, Lomachenko fought for a world title against Orlando Salido, and lost a 12 round split decision. But in his next fight, Lomachenko captured the vacant WBO featherweight title in beating Gary Russell Jr. by a 12 round majority decision in June 2014. If Top Rank believes in Robeisy Ramirez as much as they did with Lomachenko, he could be fighting for a world title right away. Of course, that’ll depend on the sanctioning bodies. They were very accommodating with Lomachenko in immediately vaulting him to the top of the rankings after his first win as a pro against Jose Ramirez in October 2013.

“What a gift to sign a two-time Olympic gold medalist like Robeisy Ramirez,” said Ramirez’s promoter Bob Arum of Top Rank Boxing on Friday. “The last two-time gold medalist that we signed out of the amateurs, Vasiliy Lomachenko, has become a big star. We anticipate the same from Robeisy.”

It would be a good vote of confidence if Top Rank gives Ramirez the same express trip to the top that they did with Lomachenko. Given that Ramirez is a two-time Olympic gold medalist, and has fought a ton of talented fighters during his years as an amateur, he’s not someone that needs to be brought along slowly for eight to ten years the way some promoters do with fighters that don’t come from a great amateur background.

“He is truly a special talent, and he has what it takes to get to the top of the featherweight division in short order,” Arum said.

It would be interesting to see Ramirez challenge featherweight champions Josh Warrington, Gary Russell Jr., Leo Santa Cruz or Oscar Valdez. Unfortunately, it won’t be easy for most of those fights to be made due to the politics of boxing. Valdez is with Top Rank, so they could in theory make that fight if they wanted to. It’s not likely that Top Rank will want to cut off one of their revenue streams by letting Ramirez fight Valdez. It’s more likely that Top Rank will keep them apart.