Roach: ‘Thurman will run like a thief once he feels Pacquiao’s power’ 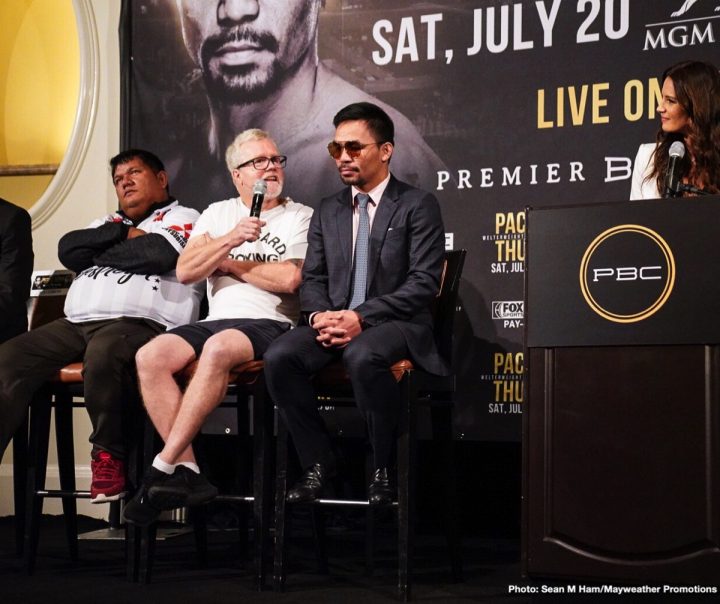 By Kenneth Friedman: Manny Pacquiao is going to turn Keith Thurman into a runner once he feels his punching power on July 20th in their fight on Fox Sports pay-per-view, according to trainer Freddie Roach. Although Roach isn’t giving examples of Thurman having run in the past during his career, he’s likely thinking of his fights against Shawn Porter, Danny Garcia and to some extent Josesito Lopez. Thurman used a lot of movement in those fights when he was trying to elude the pressure that was put on him.

“I thought we might get Mikey Garcia, but this is a very good fight,” trainer Freddie Roach said to Ring TV Digital about how he was hoping Mikey would beat Errol Spence Jr. so that a Pacquiao-Garcia fight could take place.

It was a silly pipe dream for Roach and Pacquio to think that Mikey Garcia would beat Errol Spence Jr. last April. The entire world saw Mikey as having no chance of beating Spence. If Roach wanted Mikey to fight Pacquiao so badly, he should have put that fight together before he fought Spence. Pacquiao had the popularity to get a fight against Mikey if he’d wanted it badly enough. But perhaps Mikey didn’t think about facing Pacquiao until Spence already signed him for a fight, because of the different weight classes the two fighters compete in. It looks bad for Roach to say that he was hoping to match Pacquiao against Mikey, because that looks like a weak move.

“We’re in this to get the best fighters in the world,” Roach said. “We’re not just picking opponents. We’ll fight the best out there, and this proves it,” Roach said about Pacquiao picking Thurman to fight. “I can’t wait for this fight to go. We’re going to kick his ass. He doesn’t know what he’s in for. He’s aggressive, he will come to you, but this is the style that Manny loves the best. Believe me; by fight time this guy [Thurman] will be a runner. He’s full of s–t. I bet he runs like a thief once he feels Manny’s power just like Oscar De La Hoya. This guy still has power. He still has all that. I think it’s champion vs. chump,” Roach said.

Pacquiao reducing Thurman to that of a runner would be a killer blow to the 30-year-old One Time’s career. Adrien Broner’s career imploded with his loss to Pacquiao last January. Almost no one is talking about Broner any longer after the way Manny schooled him. With Thurman, running would make him look bad, but this is something he’d already been doing. Thurman ran against Porter and Garcia after he got tired. He ran against Robert Guerrero when he started getting worked over in the first three rounds. Thurman had before the fight with Guerrero that he would stand his ground for the first six rounds. Thurman couldn’t do that because he started taking punishment, and had no other choice but to get on his bike.

“One at a time,” Pacquiao said when asked if he’d be willing to fight Errol Spence Jr. next after the Thurman fight. “I chose Keith Thurman because he’s an aggressive fighter, and I believe we’ll make a good fight.”

It’s still too early for Manny to be talking about Spence. He must get Thurman out of the way before he can talk up his next opponent. Since Thurman is considered the favorite, Pacquiao isn’t in the position right now to talk about what comes after him. A fight against Spence would be ideal for Pacquiao though. He should be fighting Spence now, but he changed his mind and decided to fight Thurman.