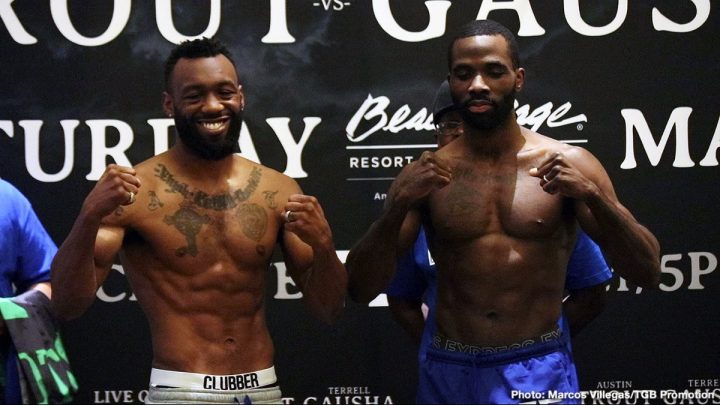 By Jim Dower: Austin Trout weighed in at 155 pounds on Friday for his scheduled 10 round fight on Saturday night against Terrell Gausha on Premier Boxing Champions on FS1 & FS2 at the Beau Rivage Resort & Casino, in Biloxi, Miss. Gausha (21-1, 10 KOs) weighed in at 154.8 pounds.

Former WBA 154-pound champion Trout (31-5, 17 KOs) will be looking to get back to his winning ways after losing his previous fight against WBC junior middleweight champion Jermell Charlo last year in June 2018. Trout, 33, put in a good effort against Charlo, who is the weaker and smaller of the two Charlo twins, but it wasn’t enough for him to get the victory.

It’s unclear why Trout has been out of the ring for 11 months. At his age, it’s not a good idea for him to take an entire year off if he wants to stay relevant in the junior middleweight division. There are too many other talented fighters in the weight class for him to be throwing away a year at a time.

It’s important that Trout win on Saturday night. He can’t lose to a tune-up level fighter like Gausha if he wants to get in position to fight for another world title. The division could open up if Jarrett Hurd, Jaime Munguia and Jermell Charlo all move up to 160. That’ll leave a lot of titles that Trout can go after. He might be able to get his hands on one of them, and hold it down.

Trout was one of the best junior middleweights up until 2012. He defeated Miguel Cotto in a huge upset 12 round unanimous decision win in December 2012. That was the high point of Trout’s career. In his next fight, he was beaten by Saul Canelo Alvarez by a controversial 12 round unanimous decision in April 2013 in San Antonio, Texas. Trout fought well enough to deserve a victory or at the very least a draw, but the judges gave it to Canelo by the scores 115-112, 118-109 and 116-111. Boxing News 24 had Trout winning by a 116-112 score. He badly outworked Canelo after hurting him with a body shot. Canelo spent the entire second half of the fight against the ropes, resting, trying to duck shots, and getting hit with lots of jabs. In Trout’s next fight after that, he was soundly beaten by Erislandy Lara by a 12 round unanimous decision in December 2013. Lara decisively beat Trout. There was no question that Lara was the better fighter of the two. The low point of Trout’s career came with him losing consecutive fights to Jermall Charlo and Jarrett Hurd in 2016 and 2017. Those were clear losses against fighters that hard more size and punching power than him.

The 2012 U.S Olympian Gausha, 31, is fighting for the second time since losing to former IBF/WBA junior middleweight champion Erislandy Lara by a 12 round unanimous decision in October 2017. Gausha was out of his league against the more talented Lara in that fight. Since that fight, Gausha bounced back with a first round knockout win over Joey Hernandez on December 22. Gausha isn’t known for his punching power, but he was fighting a guy that wasn’t nearly as talented or as tall as him i 5’7″ southpaw Hernandez.

Another full slate on the boxing schedule is upon us this Saturday night, other weights on Saturday’s Trout vs. Gausha card: