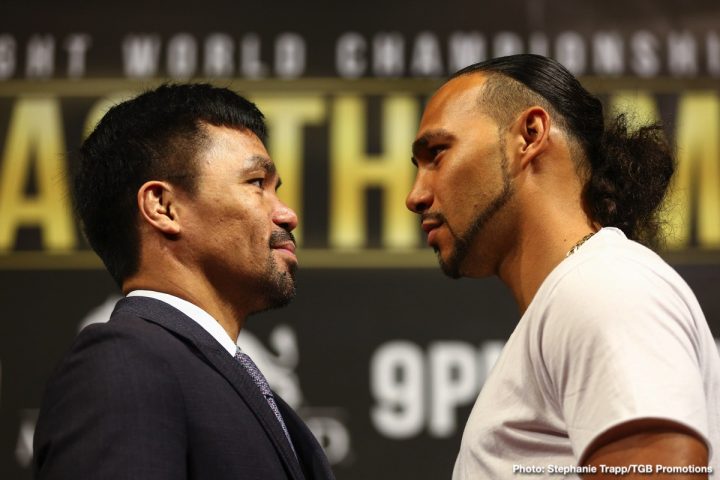 By Dan Ambrose: Manny ‘Pac Man’ Pacquiao and Keith ‘One Time’ Thurman met for their kickoff news conference on Tuesday to discuss their July 20th fight on Fox Sports pay-per-view at the MGM Grand in Las Vegas, Nevada. WBA Super World welterweight champion Thurman (29-0, 22 KOs), who looked like a junior middleweight in size, towered over the smaller 5’6 1/2″ WBA ‘regular’ 147-pound champion Pacquiao (61-7-2, 39 KOs) during their face off at the start and completion of their press conference today.

Throughout the press conference, Thurman, 30, made it clear that he’s going to be sending the 40-year-old Pacquiao into retirement on July 20. Thurman’s tough talk seemed to amuse Pacquiao, who looked and sounded disengaged and withdrawn initially. By the end of the press conference, Thurman’s tough talk had woken Pacquiao up, and him gleeful and more excited that he’s shown in a long time. Pacquiao seemed to enjoy Thurman talking about sending him into retirement.

Thurman, 5’7 1/2″, is only 1″ inch taller than Pacquiao, but he looked taller and a lot wider when the two stood next to each other. Thurman is going to need to drop some of that weight before their fight on July 20. Right now, Thurman looks like he’s close to 180 lbs. Thurman will likely need to lose at least 15 pounds at the minimum for him to be able to make the 147 pound weight limit, and then rehydrate to close to 170 lbs.

“I’m very happy to share the ring with Manny Pacquiao,” Thurman said on Tuesday during their kickoff news conference to promote their July 20th fight on Fox Sports pay-per-view. “Things change. Come July 20, he will disappear. I’m doing to Manny Pacquiao what he did to Oscar De La Hoya. De La Hoya never fought again after his loss to Pacquiao [in 2008]. I’m going to make a big statement. This is going to be Manny Pacquiao’s last fight,” Thurman said.

Thurman is considered the weakest link among the welterweight champions right now. His injury problems, weight issues, and two years out of the ring has taken a lot out of his boxing skills. We saw that in Thurman’s last fight against Joseito Lopez (36-8, 19 KOs) in his comeback after two years out of the ring on January 26 in which he had to struggle to defeat the 34-year-old ‘Riverside Rocky’ by a 12 round majority decision by the scores 17-109, 115-111 and 113-113. Lopez hurt Thurman badly in the seventh round, and had him close to being knocked out. The round ended right when Lopez was about to knock a tired and hurt Thurman out. It’s believed that if there was a little more time in the round, Lopez would have finished Thurman off.

Pacquiao is coming into the fight having recently beaten Adrien Broner and Lucas Matthysse in consecutive fights. Pacquiao looked good in both fights, but he wasn’t facing opposition in the same class as Thurman or the other elite level fighters in the division. Broner and Matthysse both looked shot. Pacquiao took advantage of their diminished skills to defeat them.

All the weight that Thurman is carrying around right now makes it hard to pick him as the winner. If this fight had taken place two years ago when Thurman was still at the top of his game, you’d have to pick him as the winner. But he’s gotten fat, had injury problems, and he’s married now. His interest in boxing doesn’t seem to be where it needs to be. Whether it the money that Thurman has made that had taken away his ambition or married life, it’s unknown. The injury issues that Thurman has had to deal with his compounded the problem to create a bad mix of things has hurt his ability to return to the ring. Some fans believe that Thurman could have returned much earlier, but he was enjoying his life too much to want to go back to the grueling sport. If that’s the case, then Pacquiao is going to be a big problem. The Thurman that we struggle against Lopez won’t likely beat Pacquiao. Thurman looked like a shot fighter against Lopez. The only reason he didn’t get beaten is because he was facing a journeyman level fighter, and not an elite level guy.

“I got a second round knockdown [of Josesito Lopez] in my last fight,” Thurman said. “I was a little dusty. I got not only one strength and conditioning coaches, but two of them. He’s not going to want a rematch after I finish him off,” Thurman said in continuing with his theme about wanting to retire Pacquiao. “I’m excited about being the guy to show him the exit. I’ve never lost to a fighter with seven defeats. I can’t see him winning. I want to show him this isn’t Adrien Broner. He wasn’t in a real fight. He’s going to fall short of the finish line,” Thurman said.

It’s an understatement that Thurman was “dusty” against Lopez. He looked more than just “dusty” against Josesito. He looked like an over-the-hill fighter, who no longer has the physical skills that he once had. Thurman just looked older. His hand speed wasn’t the same, and his stamina was gone. Thurman was tired after six round, and he took punishment for the last half of the fight. Thurman made the journeyman Lopez look like a world champion. It’s kind of surprising that the World Boxing Association didn’t strip Thurman of his title during his two years out of the ring. The WBA letting Thurman hold onto his WBA belt for two solid years essentially froze the careers of a lot of contenders in the WBA’s top 15 rankings. The sanctioning bodies need to think about the contenders in situations where a champion is on the shelf for more than 12 months. At what point was the WBA going to finally strip Thurman of his title? It’s anyone’s guess. If Thurman was still injured five years into the future, would the WBA still have let him keep his title? It’s kind of crazy to imagine a champion being allowed to keep his title for two years without fighting.

Pacquiao needs to put pressure on Thurman to force him to work. All that weight that Thurman is going to be taking off during training camp is likely going to leave him weak and drained by fight time. It’s pretty clear that Thurman is no longer a welterweight at this point. He’s gotten so thick that he should be fighting at 154 instead of 147. It’s understandable why Thurman ISN’T fighting at junior middleweight, because those guys are all huge and can punch, but it would be easier on his body if he fought in that weight class. Thurman wouldn’t have to take off so much weight to get down to the weight limit. Thurman blows up too much in between fights. Just what he’s eating is unclear. If he’s eating stuff like chocolate, ice cream and cookies, it’s not surprising he’s looking so thick the way he is.

“This will most likely be Manny Pacquiao’s last fight,” said Thurman. “On July 21st, he’ll be gone.”

If Thurman loses the fight, he might be the one whose career will be finished off. The way Thurman fought against Lopez, he would lose to all of the current champions in the 147-pound division. Thurman looks shot right now. Some of the contenders in the division like Yordenis Ugas, Sergey Lipinets and Danny Garcia would give Thurman a real run for his money if he were to fight any of them. There’s a good chance that all of them would beat him with the way he looked against Lopez.