Thurman wants to hurt Pacquiao “out of respect” 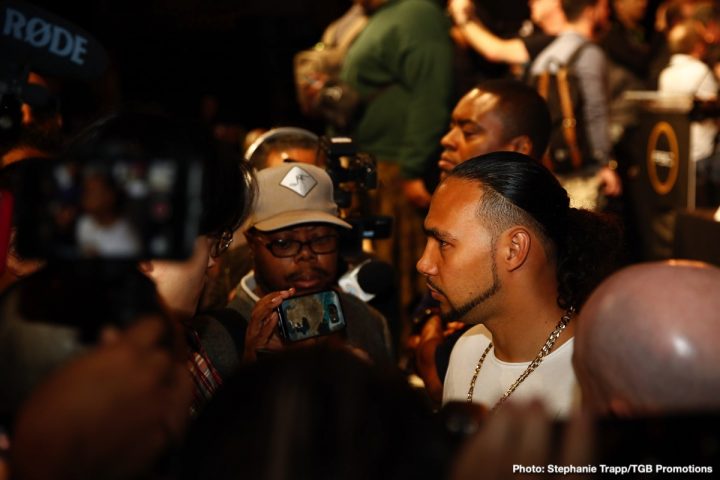 By Allan Fox: Out of “respect,” Keith ‘One Time’ Thurman says he wants to “hurt” former eight division world champion Manny ‘Pac Man’ Pacquiao, and send him into retirement on July 20 in their fight at the MGM Grand Arena in Las Vegas, Nevada. Thurman (29-0, 22 KOs) says he’s “offended” that the 40-year-old Pacquiao (61-7-2, 39 KOs) signed the contract for their fight. Thurman apparently takes it personal that Pacquiao was willing to fight him rather than duck him.

Thurman says he won’t be fighting three times in 2019

Thurman, 30, doesn’t plan on fighting for the remainder of 2019 after he faces Pacquiao on July 20th, even there will still be five months left in the year. Thurman will be satisfied with fighting twice. Thurman’s previous fight in 2019 came against journeyman Josesito Lopez on January 26. Thurman beat Lopez by a close 12 round majority decision. By not fighting three times this year, Thurman will miss out on a payday, but he doesn’t seem to be bothered by that. He didn’t fight for two years after his victory over Danny Garcia in 2017. Thurman fought once in 2016 against Shawn Porter, and once in 2017 in a fight against Garcia. Fighting twice in 2019 represents overtime for what Thurman had been doing in the past in 2016 and 2017.

“There is no plans past Pacquiao,” Thurman said. “Get this fight in, perform, have the best camp of my life, living my best life, be the best Keith Thurman I can be. And we’ll just go from there, one fight at a time. We are not looking past Manny Pacquiao, not for one second.”

If Thurman loses to Pacquiao, he’ll figure something out. He can try and push for a rematch, but that would be up to Manny and his adviser whether they want to do that. Pacquiao said that he wants to unify the welterweight division if he beats Thurman. That means he can’t afford to get tied down too long in fighting rematches against ‘One Time’ if he beats him. Given Pacquiao’s advanced age it might not be the wisest use of his time to invest in fighting Thurman again rather than moving on to fight IBF welterweight champion Errol Spence Jr., WBC champion Shawn Porter and WBO champion Terence Crawford. Pacquiao can gain more cache if he takes on Spence or Crawford than he would in fighting Thurman again if he beats him on July 20. Thurman will likely push for a rematch if he loses, but that’s expected. As long as their fight isn’t controversial, the winner needs to move on to face the other champions at 147.

“This is a dream come true. I’m looking to expand my legacy by ending his legacy, and hopefully gain more fans in the process,” Thurman said his desire to end Pacquiao’s career on July 20. “Boxing is a beautiful sport. Of course, I have all the intentions to hurt him, but it’s truly out of respect. You cannot box forever. They announced him as a senator. He needs to go be a senator. If you’re a fighter, and you want to keep stepping into the ring, someone has to let you know that it’s time for you to go. We’ve had great champions like Roy Jones Jr., one of the greatest champions to ever do it, but he didn’t end his career at the right time. He tainted his name,” Thurman said.

Thurman is hung up on thinking he’s going to end Pacquiao’s career. Pacquiao has already been beaten, so it’s not going to be the first or likely the last time he loses if Thurman defeats him on July 20. The way that Thurman is talking, a win for him over Pacquiao will cause him to just give up on the sport and walk away. I don’t think that’s going to happen. It obviously means a lot to Thurman to be fighting a superstar like Pacquiao. This is the big fight that Thurman has wanted. He wanted to fight Pacquiao and Floyd Mayweather Jr. years ago, but neither of them chose to face him. It’s only now that Pacquiao has finally decided to take the fight with him. It’s unfortunate that Pacquiao is 40-years-old, and not in his prime anymore. I don’t think Thurman really cares about Pacquiao not being at his best. Thurman will likely broadcast his win to the boxing public as if he were still at his very best. It would have been better if Thurman had stepped up and agreed to fight Errol Spence Jr. or Terence Crawford, because those guys are actually in their primes, and both about the same age as Thurman. He would stand to gain more respect from boxing fans by taking on and beating Spence or Crawford than he would in defeating Pacquiao. Thurman is seven years too late. Pacquiao has been on the slide since he was beaten in back to back fights by Juan Manuel Marquez and Tim Bradley in 2012. That was a long time ago when Pacquiao was 33.

Jones Jr. didn’t taint his name by sticking around and losing to a number of different fighters. Jones Jr. is still recognized as one of the greatest fighters in boxing history.

“When Manny Pacquiao gets knocked out by Keith Thurman, he’s still Manny Pacquiao, but Keith Thurman is the next one,” Thurman said. “It’s out of respect. I didn’t make him sign the contract. He signed the contract. Anyone that signs the contract, you’ve already offended me. I’m a real fighter. This is how it is. This is how I stay hungry. There ain’t no, ‘I’m on the B-side. That’s advertising purposes, playa,” Thurman said about his name being mentioned second in the Pacquiao vs. Thurman advertising for their July 20th fight. “When I fought Danny Garcia, we had it both sides. You had, Garcia vs. Thurman,’ and ‘Thurman vs. Garcia.’ Why? Because both were champions, you know what I mean? I’m not going to argue over petty things. It’s petty, boy. You want to come out first? You want to come out second? That’s petty. With Manny Pacquiao, trash talking is petty, because he wants to fight…I already know I’m going to win,” Thurman said.

Pacquiao is considered the A-side