Breazeale: ‘I want to KO Wilder to impress the fans’ 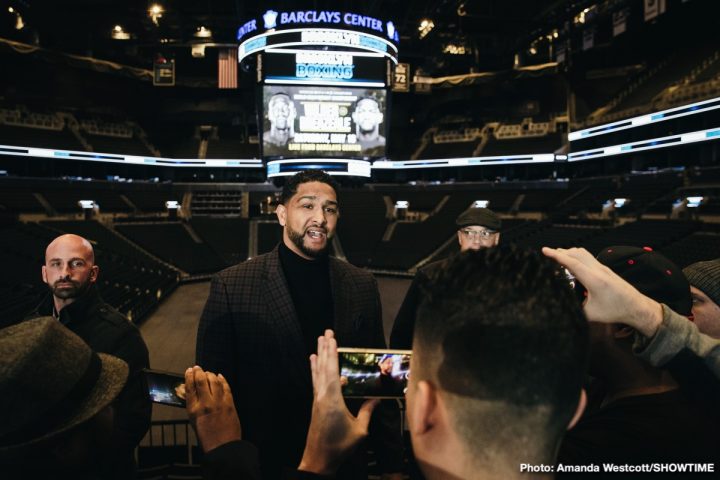 By Mark Eisner: Dominic ‘Trouble Breazeale says he wants to impress the fans next week by knocking out WBC heavyweight champion Deontay ‘Bronze Bomber’ Wilder in their fight on May 18 on Showtime World Championship Boxing at the Barclays Center in Brooklyn, New York. A big win for Breazeale over Wilder could lead to a big money unification fight against IBF/WBA/WBO champion Anthony Joshua.

Breazeale (21-1, 18 KOs) will be getting his second world title shot in the last three years, and he says wants to make sure he doesn’t make the same mistakes he made in his first title shot against IBF champion Anthony Joshua in June 2016.

“I learned a lot more in that one loss I had against Anthony Joshua than I’ve learned from my entire professional and amateur boxing career,” Breazeale said.

Breazeale isn’t saying what he learned, but it likely has to do with him making sure that he remembers to throw punches in his fights. That’s the one thing that Breazeale failed to do against Joshua.

Breazeale, 33, was knocked out in the seventh round in that fight, and he was never able to get un-tracked in that match, which took place in front of a large pro-Joshua crowd of British boxing fans at the O2 Arena in London, England. Breazeale looked like he was mentally not there that night. The moment that he stepped into the ring against Joshua, he looked like he had a bad case of stage fright. Breazeale failed to let his hands go after taking some heavy shots from Joshua in the first round. From there it was a snowball effect with Joshua inflicting more and more punishment as the fight progressed. With a fighter as much talent a the 6’7″ Breazeale had going for him, you wouldn’t think it, being that he never let his hands go.

“I want a huge KO to impress the fans and boxing community. I don’t always go looking for it, I let it come. He’s not getting back up,” Breazeale said during a media conference call on Thursday to discuss his May 18th fight against Wilder on Showtime.

The last comment Breazeale made about Wilder “not getting back up” after he knocks him out, it appears to be a verbal response to what Deontay said recently about him having “no remorse if he dies inside the ring against him. Wilder has talked in the past about wanting to have a body on record during his career in defeating someone that passes away. Breazeale appears to be getting in the act with own morbid remarks about Wilder not coming back after he knocks him out.

“Not one bit of remorse,” Wilder said to stuff.co.uk about his thoughts of not feeling any sympathy for Breazeale of if he doesn’t make it out of their fight with his life. “Because this is boxing. This is what we do. This is what we sign up for.”

Breazeale is going to have to start quickly on May 18th if he wants win this fight. Wilder is a slow starter most of the time, and that’s when he’s at most beatable point. It usually takes Wilder four of five rounds to get warmed up before he starts dropping right hand bombs on the chin of his opponents. That’s not always the case obviously, as we saw with Wilder’s first round knockout wins over Bermane Stiverne, Malik Scott and Siarhei Liakhovich. Breazeale has good punching power, and he hits more than hard enough to score a quick a knockout of Wilder if he comes out with both guns blazing in this fight. Breazeale came out slugging in his fights against Epifanio Mendoza, Billy Zumbrun and Izuagbe Ugonoh. Those were fighters that Breazeale knocked out early. It was one of those situations where Breazeale was forced to open up with his offense artillery immediately, because those guys were trying to take his head off.

“It took this opponent for me to get back to the basics and break myself down. I’ve invested in myself so I’d like to welcome Breazeale to an elite level. I’m a whole different beast,” Wilder said. “I do everything I say and mean what I say and that’s what makes me the realest champion. I’m coming to bring the pain. My actions speak louder than my words. I still have a lot to do in this division and I’m going to be successful at everything I want to accomplish,” Wilder said.

Wilder’s punch accuracy was poor in his last fight against former unified heavyweight champion Tyson Fury last December in Los Angeles, California. Wilder was missing badly with big shots the first 11 rounds, and he fell behind in the fight. It wasn’t until the twelfth round that Wilder was finally able to connect with some of his big right hand shots to put Fury on the canvas. But even after Fury got back to his feet, Wilder was badly missing with punches with him standing right in front of him. Wilder’s accuracy used to be good earlier in his career. It makes you wonder if age is taking away from Wilder’s hand-eye coordination the way it did with Wladimir Kitschko as he aged. Earlier in Wladimir’s career, he couldn’t miss with his shots, but by the time he fought Bryant Jennings in 2016, he was only capable of landing his jabs. If Wilder continues to have problems connecting with his big right hand shots, Breazeale will have an excellent shot at beating him on May 18th.

“The last time I wanted to hurt a man as much as I want to hurt Breazeale was in 2015 against Stiverne and we all know what happened then,” Wilder said.

In the first Wilder-Stiverne fight in 2015, Wilder broke his right hand in the first four rounds, and he was forced to go the full 12 rounds against him. Wilder did a lot of movement to keep out of the way of Stiverne’s big shots. It was a good boxing display by Wilder, but not one of his his better fights. He might be getting his fights with Stiverne mixed up. Wilder did a lot better in their rematch in November 2017 in knocking Stiverne down three times in the process of scoring a first round knockout.


« Oscar Valdez vs. Jason Sanchez on June 8 LIVE on ESPN

Oleksandr Usyk to return in August »