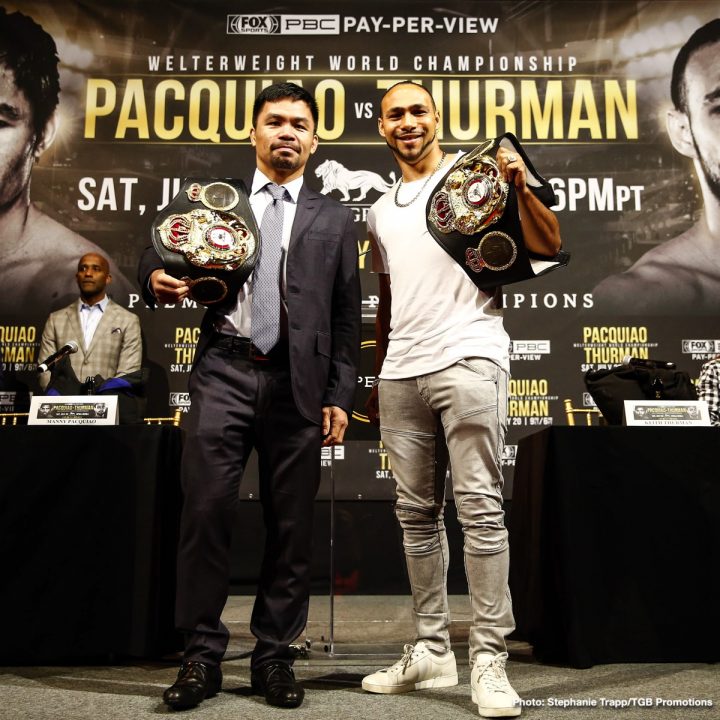 By Jim Dower: It’s now official that Manny Pacquiao (61-7-2, 39 KOs) and Keith Thurman (29-0, 22 KOs) will be fighting at the MGM Grand in Las Vegas, Nevada. The fight was already announced, but the venue wasn’t official until today. The fight will be shown on Fox Sports pay-per-view.

The reaction to this fight being put on PPV is a mixed one from fans, who don’t like the idea of paying to see a 40-year-old Pacquiao, who has clearly lost a few steps, and hasn’t beaten a good fighter in many years. Pacquiao’s recent wins have come against shot fighters Adrien Broner and Lucas Matthysse. Both were good talents in their day, but neither of them are anywhere close to what they were in their primes. Thurman, 30, has fought just once in the past two years in his unimpressive win over 34-year-old Josesito Lopez on January 26. 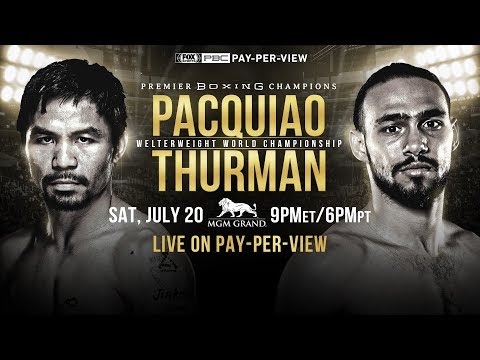 The undercard for the Pacquiao vs. Thurman card is a work in progress. As of now, these are the rights that are being talked about:

Lipinets (15-1, 11 KOs) recently stopped former two division world champion Lamont Peterson (35-5-1, 17 KOs) in the tenth round on March 24 in Oxon Hills, Maryland. It was a big surprise that the 35-year-old Peterson was beaten by the 30-year-old Lipinets, but it was one of the age things. Peterson is no longer the fighter that he once was at his age. Lipinets, who has heavy hands, took advantage of Peterson’s advanced age and the ring wear that he has on him. Peterson retired after the loss.

Molina Jr. (30-8, 24 KOs) is coming off of a controversial 10 round unanimous decision loss to former WBC lightweight champion Omar Figueroa Jr. (28-0-1, 19 KOs) on February 16. A lot of boxing fans felt that the 36-year-old Molina Jr. had done enough to deserve the victory over the 29-old Figueroa Jr. In this case, the judges gave the win to the younger fighter Figueroa Jr., who arguably represents the future still to a certain extent. Figueroa’s career hasn’t really taken off the way some people thought it would due to his hand problems. Molina has lost five times in the last five years in defeats to Terence Crawford, Lucas Matthysse, Adrien Broner, Figueroa Jr. and Humberto Soto. The good news is Molina Jr. is getting beaten only by the quality guys that he’s been facing. Still, it’s not a good sign that Molina Jr. hasn’t shown the ability to beat some of the guys he’s been facing lately.

Speaking of Figueroa Jr., he’s being talked out as one of the names for the Pacquiao-Thurman undercard in a fight against recent welterweight world title challenger Yordenis Ugas (23-4, 11 KOs). Th Cuban talent Ugas, 32, recently lost to WBC welterweight champion Shawn Porter by a questionable 12 round split decision on March 9 in Carson, California. In looking at that fight, it’s difficult to know what the judges were thinking that scored the match to Porter, because Ugas got the better of the action in each round, and looked like the better fighter of the two.

It was a good performance by Ugas. He walked the smaller Porter down the entire fight, punishing him both on the inside and the outside. It was surprising that Ugas was able to overpower Porter in close. This wasn’t the first fight in which Porter decided to play it safe on the outside. He did the same thing in his close win over Adrian Granados in November 2017. The 31-year-old Porter is starting to show signs of aging. If he doesn’t raise his game for his unification fight against IBF welterweight champion Errol Spence Jr. later this year, he’s going to get stopped.

Pacquiao and Thurman will square-off in a welterweight world title attraction that headlines a PBC on FOX Sports Pay-Per-View event beginning at 9 p.m. ET/6 p.m. PT.


« Joe Joyce says Alexander Povetkin could be next opponent