Kellerman: ‘The judges like Canelo; Jacobs needs a knockout’ 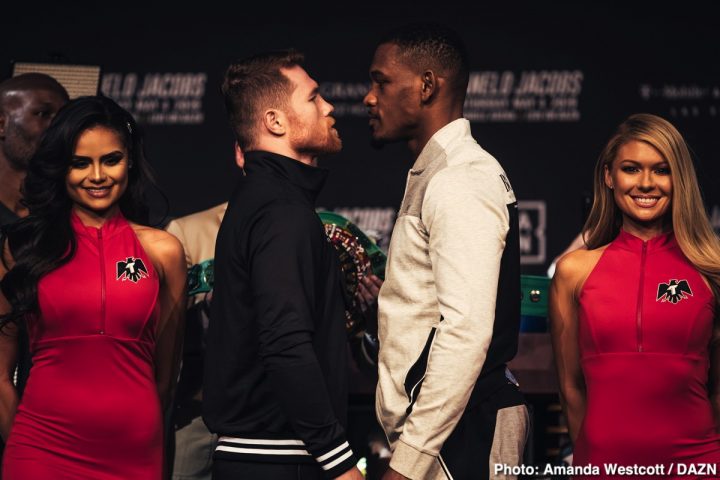 By Dan Ambrose: ESPN commentator Max Kellerman thinks Daniel Jacobs is in a tough situation in which he’s going to need to knockout Saul Canelo Alvarez for him to win the fight on Saturday night. Kellerman reasons that the judges like Canelo (51-1-2, 35 KOs), and that they’ve shown that in his two fights with Gennady Golovkin, Erislandy Lara and Austin Trout. Those were all fights that Canelo could have lost, but didn’t because of the judges scoring it favorably for him.

IBF middleweight champion Jacobs (35-2, 29 KOs) has a 50-50 shot at winning the fight against WBA/WBC champ Canelo Alvarez if he uses his jab and boxes him the entire fight, says Kellerman. But if he’s to win, he’s probably going to need to knockout Canelo or make it such a decisive victory that the judges can’t help but to give him the win in their fight on DAZN at the T-Mobile Arena in Las Vegas, Nevada.

“If you look at Canelo’s career, Mayweather just about shut him out. One judge had it a draw. No way was it,” Kellerman said on Stephen A. | First Take. “The second fight against GGG was close. The first one he [Canelo] probably lost. Canelo got the draw. The second one maybe he won or maybe it was a draw. Canelo got the win. Erislandy Lara, Austin Trout, both fights were close. Canelo got the decision. The judges like Canelo. Daniel Jacobs has to knock him out to win,” Kellerman said.

What Kellerman didn’t say is that most of those fights took place in Las Vegas, Nevada with the exception of the Canelo-Trout fight, which was fought in San Antonio, Texas.

To listen to Kelleran go on about Canelo, it looks bad for Jacobs on Saturday, because he seems to be under the impression that he can win the fight by boxing the Golden Boy star Alvarez (51-1-2, 35 KOs). It doesn’t sound like Kellerman believes that ‘The Miracle Man’ Jacobs can win the fight against Canelo unless he comes out looking to stop him so that he doesn’t find himself in the same position that GGG, Lara, Trout and Miguel Cotto were all in when they fought him. What might make it hard for Jacobs to score a knockout is Canelo has a really good chin, and he’d difficult to hit cleanly due to his upper body movement. Even when Canelo gets hit flush, he’s able to take the shots well. Of Canelo’s two fights with the hard hitting GGG, the only time he was hurt was in the second fight when Golovkin nailed him with a couple of uppercuts that snapped his head back. Canelo recovered immediately though. If Golovkin had the ability to put his punches together, he might have taken him out, but he failed to do that.

“I’m worried about Jacobs. I think he can box. He’s got a good punch,” Stephen A. Smith said. “Here’s the thing: We know Canelo will probably get a decision. I think Jacobs has to come at Canelo. You know what an exceptional counter puncher Canelo is. He’s made for that. What I learned from watching the second fight with GGG, outside of him being an absolute body puncher, he’s got that chin down. He can take a punch, and my God can he give it. That body is taller. Canelo is not dumb. He’s very smart, and he’s a counter puncher. I think Jacobs is a bit taller. Knowing he’s got to take him, because he probably won’t get the decision, it could put him in trouble. That’s my worry, but I think Canelo can win by a decision unless he gets caught, because he got clipped before in the past in 2010 when he got knocked out. Yes, he may have had cancer already,” Smith said.

So, not only Kellerman thinks that Jacobs is in a tough spot trying to win a decision against Canelo, Smith thinks he’s going to have a hard time winning a decision. Smith does believe that Jacobs can win a decision, but it won’t be easy for him, because he’s going to need to make it a clear decision and he’ll have to take some big shots in order to get the victory. If Jacobs’ chin betrays him like it did in his loss to Dmitry Pirog, then he’ll come up short on Saturday night.

“Daniel Jacobs has to be on the alert for that kind of counter punching,” Kellerman said in comparing Jacobs to the 1985 version of welterweight Milton McCrory, who lost to Donald Curry. “He knows he has to win decisively for him to get the decision, putting more pressure on Jacobs to open up than he aught to. If you saw the GGG fight, Jacobs is a disciplined fighter. If he fights a disciplined fight and stays behind the jab, this is really a 50-50 fight,” Kellerman said.

There’s a big difference between Jacobs and the tall, skinny 6’0″ Milton McCrory, who wasn’t a huge puncher, and Jacobs. It’s a bad comparison by Kellerman. McCrory was over-matched in the power and the speed department by the hard hitting Curry. Jacobs has the punching power to hurt Canelo if he attacks him aggressively the way that Curry was doing against McCrory. Curry showed zero respect for McCrory’s power in that fight in 1985, and he was able to easily stop him in the second round. If Canelo walks Jacobs down in the same way Curry did with McCrory, he could get caught by one of his big shots and taken out the way that Peter Quillin was.

“Canelo proved if nothing else that he’s faster than GGG,” Smith said. “So the Daniel Jacobs that you saw against GGG, as powerful as GGG was, and that jab was exceptional, and he’s definitely a good boxer, the reality is he’s a bit slower than Canelo. Canelo has more speed to counter what Daniel Jacobs throws at him with. Canelo also showed he’s very versatile against GGG. Canelo showed that he can fight. He’s become a more aggressive fighter, cutting off the ring and coming forward as more of a classic Mexican fighter. I’m going to smash your body type of puncher. He also does the James Toney against the ropes where he can pull punches and counter very well. Canelo has developed from a real good prospect as a teenager to a good champion.”

Canelo will counter Jacobs if he throws something, but the reaction might not be favorable for him if Daniel starts unloading on him with shots. It’s hard to predict what Jacobs is going to do in this fight, because he’s going to be pretty hyped up due to all the buzz. There’s a lot for Jacobs to gain. If he dethrones Canelo, he stands to make a lot of money. This could be a new beginning for Jacobs. By the same token, Jacobs could dominate Canelo from the outside the way that Floyd Mayweather Jr. did in using his jab, and single right hands and left hooks. Mayweather was able to greatly limit the shots that Canelo was able to land. Of course, with the judges that worked both of the Canelo-Golovkin fights, Jacobs could find himself still losing to Canelo even if he fought exactly the way that Mayweather did. The judges that scored both of Canelo’s fights with Golovkin likely would have given him the win over Mayweather if they had been there that night, because GGG clearly deserved the win in fight #1 and fought well enough to rate a draw in the second fight. That’s why Kellerman and Smith believe that it’s going to be difficult for Jacobs to win a decision. As Kellerman said, ‘the judges like Canelo.’

“Jacobs took GGG’s punch pretty well. He got knocked down once, and he was kind of off balance,” Kellerman said. “He got up, and was never close to going down again, and he gave GGG a really close fight.”


« Luke Campbell vs. Devin Haney in the works for July 27 on DAZN

Teofimo Lopez Jr. vs. Masayoshi Nakatani on July 19 on ESPN+ »