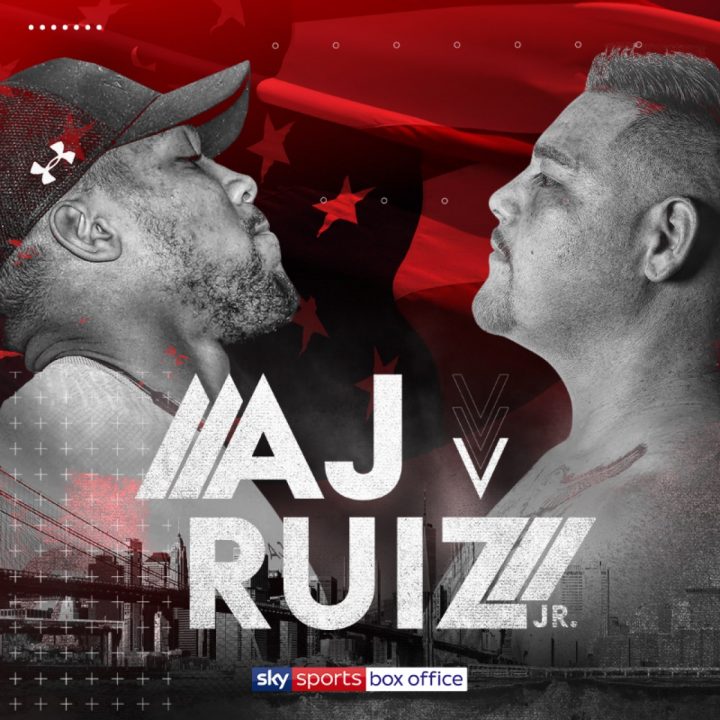 By Scott Gilfoid: Anthony Joshua says it’s going to be harder for heavyweights Deontay Wilder and Tyson Fury to defeat him later on, as he keeps improving his game and developing. Joshua (22-0, 21 KOs), who holds the IBF, WBA and WBO heavyweight titles, feels that his main competition in the division, Wilder (40-0-1, 39 KOs) and Fury (27-0-1, 19 KO), should fight him now rather than later. It’ll be better for them if they fight him now rather than down the road when they have more mileage on them.

Anthony Joshua’s promoter Eddie Hearn has made flat fee offers, and recently a 60-40 offer to Wilder and Fury to face AJ, but it’s failed to produce a fight.

Joshua is obviously frustrated that he can’t fight Wilder, but he’s got the ultimate power to make the fights with Deontay and Fury happen. All Joshua has to do is tell Hearn to give Wilder and Fury a 50-50 deal, and the fights will likely get made straight away. Joshua can make the Wilder and Fury fights happen at any time. He just needs to tell his promoter Eddie Hearn to give those fighters the 50-50 cut that they’re looking for.

“The longer Wilder and Fury leave it, the tougher I think the fight will become for them. I’m not the fighter of two years ago. They’ve been doing it 10, 11 years, I’ve been doing it five, six years,” Joshua said to BBC 5 live’s boxing podcast. “Give me another year or two, I think I’ll develop that little bit more. I only want to improve and test myself.”

If there is improvement in Joshua’s game, one would need a microscope to see it. As far as this writer can see, Joshua is the same guy that struggled against 40-year-old Wladimir Klitschko two years ago. The only thing that’s changed is the opposition has gotten worse.

The 2012 super heavyweight Olympic gold medalist Joshua wants to fight Wilder and Fury, but his promoter Eddie Hearn of Matchroom Boxing has been unable to get them to agree to the smaller money offers. Wilder wants a 50-50 deal, but Hearn has chosen not to give him what he wants. As such, the fight hasn’t happened. Wilder has maintained all along that he would gladly fight Joshua if Hearn gave him what he wants. Out of what appears to be desperation, Hearn is now looking to have the World Boxing Council order the winner of the May 18th Wilder vs. Dominic Breazeale fight to defend against Hearn fighter Dillian Whyte. It looks to some like Hearn is hoping that the pressure of having Whyte bearing down on Wilder will force him to come to the table to make the fight with Joshua. If Wilder still takes the fight with Whyte, there would be a possibility of Hearn’s fighter winning.

A victory for Whyte would then have Wilder eliminated from the equation, and Hearn could then easily make a fight between Joshua and Whyte. Unfortunately for Hearn, it doesn’t look like the WBC is going to order the winner of the Wilder vs. Breazeale fight to face Whyte. The WBC still hasn’t come out with their resolution, but it’s believed by some that they’re going to order Whyte to fight Luis ‘King Kong’ Ortiz in an official WBC title eliminator to determine who becomes the mandatory. Since Whyte never took part in the WBC’s eliminator to begin with, he would simply be doing what he already should have done last year by facing Ortiz of stead of the likes of Lucas Browne, Joseph Parker and journeyman Dereck Chisora.

Joshua, 29, isn’t that much younger than the 30-year-old Fury, and the 33-year-old Wilder. Joshua has had a history of injuries, so he can’t point to his age to guess how things will be harder for Wilder and Fury in the future if they choose not to fight him right now.

Joshua doesn’t look like he’d getting better. He was staggered in the second round in his last fight by the much smaller 40-year-old Alexander Povetkin last September. In Joshua’s fight before that, he was getting worked over on the inside by Joseph Parker in a fight in which the referee Giuseppe Quartarone appeared to play a HUGE part in the final outcome of the fight with the way that he kept the two heavyweights separated for most of the fight. The referee looked like he wasn’t aware that fighters are allowed to fight on the inside. With Parker unable to get in close due to the referee constantly pulling him away, it resulted in the two fighters battling on the outside. Joshua had the reach advantage, so he dominated. Given how the referee played a big factor in the Joshua-Parker fight, one can argue that there should be an asterisk next to the win for Joshua, because the fight was a very odd one to watch. Joshua calling a timeout on his own without waiting for the referee to give him permission.

Before that, Joshua looked exhausted in struggling to beat Carlos Takam in their fight in October 2017. That was not an impressive performance by Joshua. There no signs of Joshua improving as a fighter. In Joshua’s fight against Wladimir Klitschko in April 2017, he was knocked down by the 40-year-old in the sixth. Joshua was exhausted and hurt from rounds six to ten. Wladimir easily could have stopped Joshua, but he decided that he wanted to try and box his way to a decision instead of finishing off his hurt and tired foe. Wladimir’s trainer Johnathon Banks wanted him to finish the job, but he decided to box. There was no sign of Joshua improving against Klitschko. He looked beatable and lost most of the time from the sixth. The pro-Joshua crowd at Wembley Stadium eventually encouraged Joshua to get back into the fight in the 11th, and he was able to stop the 40-year-old Klitschko. It wasn’t an impressive performance that made one believe that Joshua is improving as a fighter.

“There are all these things trying to improve our training camp and move to the future instead of staying stuck in the old ways of boxing. It’s going to be interesting because now is the first time I’m going to be able to express these things,” Joshua said.

Don’t be surprised if Joshua gasses out and is on the verge of being knocked out in his next fight. So much for the improvement.

Joshua is defending his titles next against Andy Ruiz Jr. (32-1, 21 KOs) on June 1 on DAZN and Sky Box Office at Madison Square Garden in New York. Joshua could have been fighting Wilder or at the very least Luis Ortiz, but his promoter Hearn didn’t offer them the money they wanted. Hearn said that he made a $7 million offer to Ortiz, which is only small bump up from the $5 million that AJ’s original opponent Jarrell “Big Baby” Miller was set to get for the June 1 fight until he tested positive three times for banned substances and was pulled from the fight.