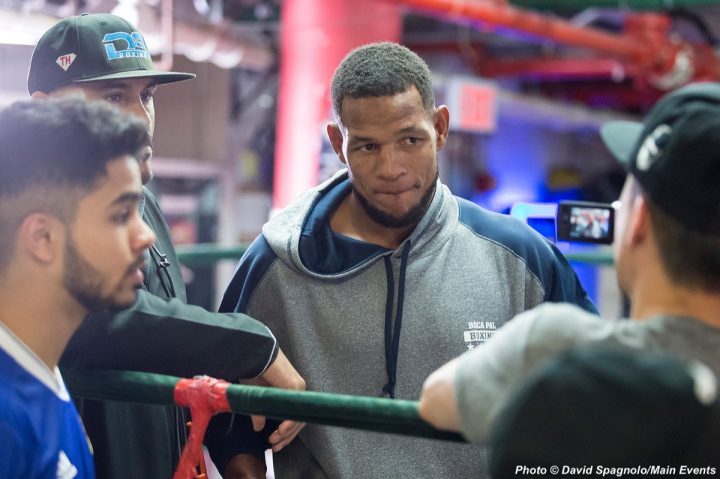 By Mike Smith: Former light heavyweight world title challenger Sullivan Barrera (22-2, 14 KOs) has signed with Top Rank promotions, according to Dan Rafael. It’s unclear at this time how many fights the 37-year-old Barrera is signing for with Top Rank. The Cuban talent will be fighting next month on June 8 against 36-year-old cruiserweight Michael Seals (22-2, 16 KOs) in Reno, Nevada.

This is an interesting signing by Top Rank, as it gives them another light heavyweight to mix and match against some of their other top fighters in the 175 lb weight class. Top Rank already has WBC champion Oleksandr Gvozdyk, IBF champ Artur Beterbiev, former WBO super middleweight champion Gilberto “Zurdo” Ramirez and WBO 175 lb. champion Sergey Kovalev at light heavyweight.

Adding Barrera to the promotional company will let them match him against the other top guys. It’s a big positive for Barrera, as long as Top Rank puts him in with one of the other champions. If Barrera is going to be used as an opponent for Gilberto Ramirez to fight, then it’s not as good of a deal.

Barrera is coming off of a 10 round unanimous decision victory over Sean Monaghan on November 3 in Brooklyn, New York. Barrera won the fight by the scores 99-91, 98-92 and 99-91. In Barrera’s fight before that, he was beaten by WBA World light heavyweight champion Dmitry Bivol by a 12th round knockout on March 3 of last year at Madison Square Garden in New York. Barrera gave Bivol a tough fight despite losing by a knockout in the 12th. Bivol got tired from the pressure that Barrera was putting on him, and he kind of struggled in the championship rounds until he turned it on in the 12th to get the stoppage. There was absolutely no quit in Barrera in that fight.

Before losing to Bivol lat year, Barrera had won four fights in a row. Three of the wins were impressive ones against Joe Smith Jr., Felix Valera and Vyacheslav Shabranskyy.

Barrera lost to former two division world champion Andre Ward by a 12 round unanimous decision in March 2016 in a fight that was competitive in Oakland, California. The difference in the fight was Ward’s inside fighting ability, and his faster hand speed. Barrera showed the better power, and made a good fight of it. This was by no means an easy fight for Ward. Barrera also has wins over Karo Murat, former world champion Jeff Lacy, Rowland Bryant, Epifanio Mendoza and Hakim Zoulikha. Barrera has been matched tough right off the bat since turning pro in 2009 due to his long amateur background in Cuba.

It’ll be a big positive for Barrera if he can a crack at a world title against Beterbiev, Gvozdyk or Kovalev. Barrera is ranked #2 WBA, #6 WBC, #6 WBO and #11 IBF. Barrera is ranked high enough for him to get a title shot against any one of those champions.