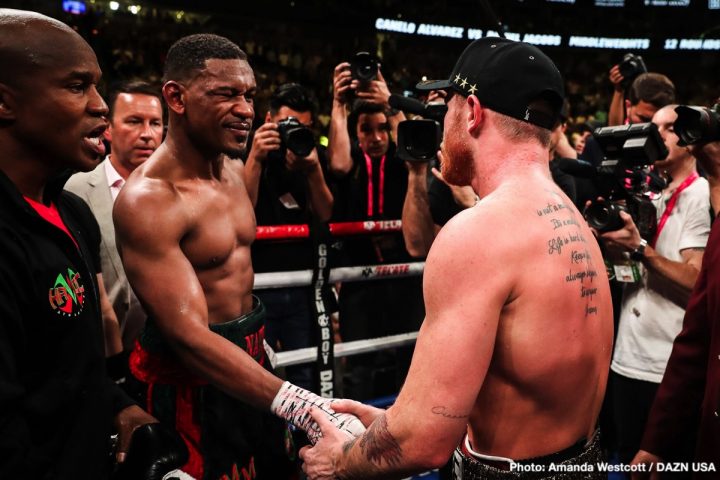 By Jeff Aranow: After a listless performance in losing to Saul Canelo Alvarez last Saturday night in Las Vegas, Nevada, former IBF middleweight champion Daniel Jacobs (35-3, 29 KOs) revealed that he’s thinking of moving up to super middleweight to reinvent himself in that weight class. Jacobs thinks it’s time to make the move to 168 after 12 years fighting at 160.

Despite appearing to be 10 to 15 pounds heavier than Canelo, Jacobs was too weak to mount sustained attacks when he needed to during the 12 round fight. The ‘Miracle Man’ Jacobs allowed Canelo to march through the first six rounds building what proved to be an insurmountable lead in the fight.

Jacobs came in 3.6 pounds over the 170 lb. rehydration limit at 173.6 lbs for secondary weigh-in on the morning of the fight. Jacobs admitted that his weight went up to 170 lbs just from drinking water. He had to eat, and that caused him to come in well over the 170 lbs limit. Obviously, it was a mistake on Jacobs’ part to agree to the rehydration limit for the fight with Canelo, but he maintains that he wouldn’t have gotten the fight if he’d rejected the weight stipulation that was put forth by Canelo’s promoters at Golden Boy Promotions as part of the contract. Jacobs still didn’t look strong for the fight even with him not making weight for the secondary rehydration weigh-in.

”Just rehydrating with water, I shot up to 170, and I definitely needed to eat beyond that,” Jacobs said after the fight. “I might take my talents to super-middleweight. I’m extremely happy I was able to perform at the highest level. I still think I can have a career that can be thriving.”

Jacobs’ record in his last five fights is now 3-2. However, give narrow his wins were against Sergiy Derevyanchenko and Maciej Sulecki, he could easily be 1-4 in his last five fights. Golovkin and Canelo beat Jacobs, and he squeaked by Sulecki and Derevyanchenko. Those fights proved that Jacobs needs to make some kind of change his game for him to get back to the top. Fighting at super middleweight is going to be a difficult adjustment for Jacobs, who has thrived on being bigger than his opponents at middleweight.

Jacobs will no longer be able to count on having the size advantage over his opponents if he moves up to the 168 lb weight class. Jacobs will still be a powerful puncher even at super middleweight, but if he’s only capable throwing an occasional hard power shot like we saw in the ninth round last Saturday against Canelo, he’s not going to do well. Super middleweights like David Benavidez and Callum Smith are capable of throwing those kinds of power shots nonstop for 12 rounds. Those fighters load up on everything they throw. Jacobs will be over-matched against Callum Smith and Benavidez if he’s incapable of matching their fire power due to his stamina problems. It might be better for Jacobs to continue to drain down to 160 to fight at middleweight.

Earlier in Jacobs’ career, he was a busier fighter, throwing a lot of shots with mean intentions on them. He fought entirely different 10 years ago compared to how he fights now. Jacobs has clearly slowed down as he’s gotten older, and he’s not the huge knockout guy that he was when he was in his early 20s. Jacobs is now more of a boxer/puncher than the pure slugger that he used to be.

If Jacobs does move up to super middleweight, he’ll need to decide which path to go in for him to try and capture a world title. Being signed with Matchroom Boxing USA promoter Eddie Hearn, means that Jacobs will likely need to target other fighters that compete on DAZN. That mean that Jacobs will need to go after WBA Super World super middleweight champion Callum Smith. That would be a hard fight for Jacobs. IBF champion Caleb Plant is with Premier Boxing Champions. That would be an easier fight for Jacobs, but one that might be difficult for Hearn to negotiate. Anthony Dirrell and David Benavidez are both with PBC.

The WBO belt is currently vacant, but Billy Joe Saunders is expected to capture that belt on May 18th when he faces Shefat Isufi. Saunders is with Queensbury Promotion. Jacobs vs. Saunders would be a doable fight, but it would be a difficult match-up for Daniel. The southpaw Saunders is a well schooled fighter with a lot of talent. For Jacobs to beat Saunders, he would need to increase his punch output considerably. It’s not use for Jacobs to move up to 168 if he can’t let his hands go enough for him to beat the elite level fighters in the division.

Jacobs was awed by the talent that Canelo displayed last Saturday night. Even though Jacobs still felt he had personally done enough to earn the victory, he came away impressed with the boxing skills the 28-year-old Alvarez showed in the fight.

“He’s a strong force, he was there to fight. He has great upper body movement, and his timing was really strong on when to punch and when to back off,” Jacobs said about Canelo. “I went to battle with a perfect opponent.”

Moving up to super middleweight might not turn out well for Jacobs. Like a lot of fighters, they look for reasons to identify why they’re unable to win the important fights in their careers. Sometimes they’re able to improve their game when they make a move up or down in weight, but most of the time nothing changes. With Jacobs, he’s going to have a hard time dealing with the power of the big hitters at super middleweight. If Jacobs’ punch resistance was top notch, and if he had a high work rate, his chances of success at 168 would be excellent. Unfortunately, Jacobs doesn’t throw a lot of punches, and his ability to take a hard punch is questionable. If possible, Jacobs would be better off moving down in weight than he would in going up to 168, and taking on young lions like Benavidez and Callum Smith.


« Johnathon Banks: ‘Wladimir Klitschko is NOT coming back’