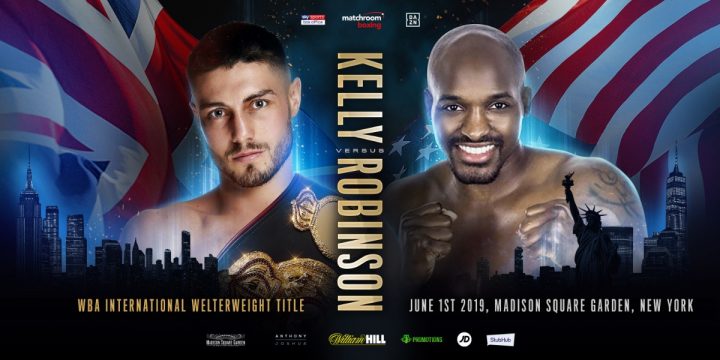 By Charles Brun: Matchroom fighters Josh Jelly, Callum Smith, and Joshua Buatsi will be in action on the undercard of Anthony Joshua vs. Andy Ruiz Jr. this Saturday night on June 1 at Madison Square Garden in New York. Matchroom promoter Eddie Hearn has loaded the Joshua-Ruiz Jr. card with some of the best talent in his stable to give them a chance to be seen by U.S boxing fans.

The match-ups unfortunately aren’t the greatest in terms of them being competitive fights on paper, but it seems that Hearn’s focus is more on putting showcase fights rather than ones that 50-50 affairs. It’s understandable though. To build a star in a new country, you first one to put them in showcase fights to get the foreign audience hooked on the fighters before you start matching them against opposition that could bring them down to earth by beating them.

Here are the undercard fights for this Saturday’s Joshua vs. Ruiz Jr. card at MSG in New York:

WBA Super World 168-pound champion Smith (25-0, 18 KOs) is defending against middleweight N’Dam (37-3, 21 KOs) in the co-feature bout. Hearn hasn’t really explained his reasoning for matching Callum against an aging 35-year-old middleweight in N’Dam rather than a top contender from the 168-pound division. Some boxing fans believe that Hearn picked N’Dam for Callum to fight, because he’s known to the hardcore fans in the U.S, who remember him for his fights against David Lemieux, Peter Quillin, Ryota Murata and Curtis Stevens. It’s true that the hardcore boxing fans are familiar with N’Dam, but a lot of them an unfavorable view of him due to his losses to Lemieux, Quillin and Murata. Quillin knocked N’Dam down six times in beating him by a 12 round unanimous decision in October 2012. Lemieux dropped N’Dam four times in beating him by a 12 round unanimous decision in June 2015. You get the picture. N’Dam has a chin problem, and now he’s been selected by Hearn to move up to super middleweight, a weight class that he hasn’t been fighting at, to challenge Callum on Saturday for his WBA title. It makes perfect sense, right?

Undefeated 2016 Olympian Josh Kelly (9-0, 6 KOs) puts his unbeaten record on the line against 33-year-old American Ray Robinson (24-3-1, 12 KOs) in a 10 round fight. This is a step up fight for the 25-year-old Kelly, who is coming off of a 10 round decision win over Przemyslaw Runowski last April. Kelly didn’t look good in that fight. Robinson is ranked #13 with the World Boxing Council at 147, and he’s definitely a better fighter than Runowski. Robinson fought to a surprising 10 round draw against #1 WBO Egidijus Kavaliauskas last March. Going into that fight, Kavaliauskas was expected to win without any problems. Robinson put a lot of pressure on Kavaliauskas, and fought well enough to get a draw. In his previous fight, Robinson was stopped in the seventh round by Cuban talent Yordenis Ugas last year in February 2018. There’s no shame in getting beaten by a fighter like Ugas. He’s one of the best in the welterweight division today. Kelly is going to have a lot of problems with Robinson’s talent. The lack of punching power for Kelly, and all the wasted showboating movies that he tends to make could hurt him against Robinson. If Kelly doesn’t get serious, he might get his head taken off by Robinson. Kelly fought with his hands down by his sides the entire fight with Runowski, and he was hit with a lot of silly shots that wouldn’t have been hit with if he’d had his guard up. Kelly’s trainer Adam Booth hopefully has impressed upon him the need to keep his guard up. It’s doubtful though. It just seems like Kelly is training himself, and doing what he pleases. He needs a strict, old-school trainer that won’t let him get away with fighting the way he does. There’s nothing wrong with Kelly fighting with his hands down and showboating the way he does if he had the reflexes, speed and power to fight like that, but he doesn’t. Kelly isn’t able to get out of the way of a lot of the shots that are thrown at him, because he’s not a Roy Jones Jr. or Floyd Mayweather Jr. type of talent in terms of his reflexes. Kelly’s punching power is completely lacking. He’ll never be a puncher. Kelly’s power is similar to his Matchroom stable-mate Daniyar Yeleussinov, who can’t punch, and has arguably turned out to be a major disappointment as a pro.

This is a disappointing match-up, as the unbeaten 2016 Olympian Buatsi (10-0, 8 KOs) is capable of beating so much better than the 34-year-old Periban (25-4-1, 16 KOs). Hearn is talking about wanting to have the 26-year-old Buatsi challenge for a world title against WBA light heavyweight champion Dmitry Bivol soon, which makes it difficult to comprehend what his rationale is to match him against a lower level 2nd tier fighter like Periban. This is the type of a match-up that would have made sense for Buatsi’s first fight as a pro, but not his tenth fight. This is a backwards step for Buatsi from his last two fights against Tim Conroy and Renold Quinlan. Hearn is doing Buatsi no favors by putting him in with weak fodder level opposition in preparing him to face Bivol in the near future. At this pace, Buatsi is going to be in shock when he eventually faces Bivol, and is stunned at how much better he is than the godawful opposition that Hearn has been consistently feeding him since he turned pro. Hearn’s choice of Periban for Buatsi to fight makes you question whether he assembled the Joshua vs. Ruiz Jr. card with cost in mind. In other words, if Hearn wanted to put the undercard together on the cheap without paying a lot of money for talented opposition for his Matchroom stable fighters to face, then selecting guys like Periban makes perfectly good sense. It’s just unfortunate that the undercard lacks competitive fights. It’s a blow it move on Hearn’s part, but we don’t know what his end game is. He might be thinking that the casual boxing fans will be impressed with guys like Buatsi, Callum Smith and Josh Kelly in seeing them completely outclass their opponents on Saturday night.

These are the rest of the notable undercard fights for Saturday:

– Chris Algieri vs. Tommy Coyle: Former WBO light welterweight champion Algieri (23-3, 8 KOs) is matched up against a fighter that he SHOULD be able to defeat in 29-year-old former Commonwealth lightweight champion Coyle (25-4, 12 KOs). Algieri, 35, has been in with much better opposition than Coyle during his career, and he’s arguably beaten far better fighters. Some of the guys that Algieri has beaten during his career would likely wipe the deck with a soft puncher like Coyle. Never the less, Algieri is 35 now, he’s been inactive for prolonged periods of time since 2016. Algieri has fought just twice since his fifth round stoppage loss to Errol Spence Jr. in April 2016. Algieri was out of the ring from 2016 to November 2018. Since coming off of his 2-year period of inactivity, Algieri has looked less than impressive in beating Angel Hernandez and Daniel Gonzalez. In his last fight against Gonzalez last January, Algieri looked exhausted after just two rounds. He was able to hang on to win a 10 round decision by using his boxing skills to out-point Gonzalez, but he looked beatable. Coyle has a good engine, if nothing else, and he could take advantage of Algieri’s stamina problems to win a decision. Coyle lacks the pop in his punches to stop Algieri, but he can certainly outwork him to win a decision. If Algieri loses this fight, he’ll retire. Getting beaten by a British domestic level heavyweight like Coyle would be too big of a pill for Algieri to swallow, I’m afraid. He’ll likely retire if he loses this fight.

– Katie Taylor vs. Delfine Persoon: This is a fight that the domestic scene is interested in back home in the UK. The fight won’t get a lot of attention on Saturday unfortunately. Most of the interest will be in the main event between Joshua and Ruiz Jr. Most casual boxing fans in the U.S have never heard of Taylor or Persoon. As such, this fight will slip under the radar screen for most of them. Taylor is expected to easily win this fight, and there’s no reason to think she won’t.


« Oleksandr Usyk to fight in September

Pacquiao vs. Thurman: Keith hoping for one million PPV buys »