Oleksandr Usyk to fight in September 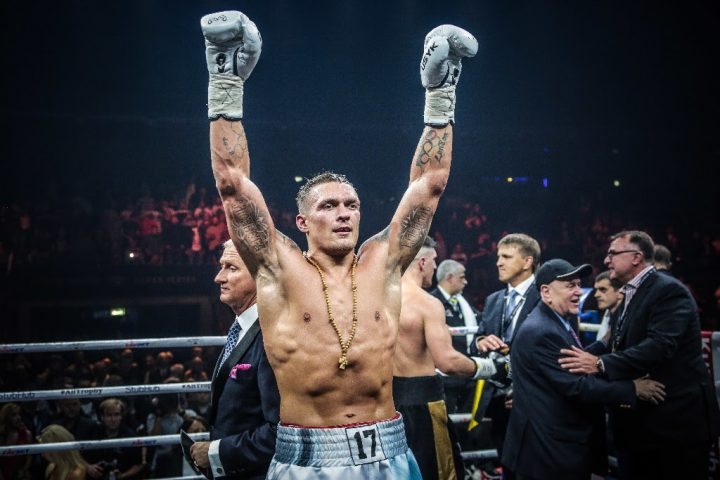 By Mike Smith: Oleksandr Usyk will be returning in September to resume his career at heavyweight, according to his promoter Eddie Hearn of Matchroom Sport. Usyk (16-0, 12 KOs) injured a bicep while training for his heavyweight debut against 38-year-old former world title challenger Carlos Takam, which had scheduled for last Saturday night for DAZN at the MGM National Harbor in Oxon Hill, Maryland.

Usyk, 32, was forced to pull out of the card. This enabled lightweight Devin Haney to move into the main event and shine in beating fringe level fighter Antonio Moran.

There’s no word whether Usyk will still be facing Takam (36-5-1, 28 KOs) in September. Given that Takam doesn’t have a fight scheduled, it wouldn’t be surprising if that match still goes ahead. It’s a long time for Takam to have to wait on the Usyk fight, but if the money is good enough, you can understand why he would wait.

For some reason, Usyk still hasn’t vacated his cruiserweight titles. Just why he’s holding onto the belts is the major question. Usyk hasn’t fought at cruiserweight since last November in beating WBC emeritus champion Tony Bellew by an eighth round knockout. With the World Boxing Super Series tournament taking place, it would be class move for Usyk to vacate all of his cruiserweight titles so that some or all of those belts could be on the line for the tournament. The fact that Usyk hasn’t vacated his belts seems to suggest that he’s not quite certain whether it’s going to workout for him at heavyweight or not.

If Usyk doesn’t have his mind made up whether he wants to commit 100% to fighting in the heavyweight division, it makes sense for him to hold onto his cruiserweight titles. For all the contenders in the cruiserweight division, it’s not exactly fair to them that Usyk is sitting on the titles without planning defending them. If Usyk still hasn’t vacated the belts by this November, the sanctioning bodies will need to decide whether to strip him of his belts or let him keep the belts longer. Keith Thurman was able to sit on his World Boxing Association welterweight title for 22 months without being stripped by the sanctioning body. Of course, he was injured, but that’s still incredibly long time for a champion to be able to keep his belts without defending them.

4 months is a long time for Usyk

Usyk will have been out of the ring for 10 months by the time he returns to the ring in September. Is this a sign of age starting to kick in for the 32-year-old Usyk? If so, it’s a good thing that Usyk is fighting at heavyweight, because he cash out soon in a fight with IBF/WBA/WBO heavyweight champion Anthony Joshua if his body is starting to break down. Hearn said last Saturday night that he’s interested in matching Michael Hunter against Usyk possibly. Usyk already beat Hunter two years ago at cruiserweight. But at heavyweight, it might be a different story if Usyk is heavier, and slower than he’s been. Usyk used movement to defeat Hunter in 2017, as he was getting outworked by the 2012 U.S Olympian when the two were standing and trading.

The goal that Hearn has in mind for Usyk is to put him in with Joshua for a Matchroom controlled fight. If this isn’t just a money grab without any hopes of being a competitive match-up, then Hearn needs to put Usyk in with quality heavyweights that will be able to prepare him for what he’ll have to deal with when he gets inside the ring with Joshua. This isn’t a knock on 38-year-old Takam, but he’s too short, too old and too past it for him to be any help to Usyk. Hearn might as well match Usyk with Dereck Chisora, because Takam was recently knocked out by him. Usyk needs to fight good opposition if he truly wants to beat Joshua. Hearn can’t have Usyk fight an old guy like Takam, and then throw him in with Joshua. It would be too transparent what the fight would be all about. It would be seen as a money grab just as the Usyk vs. Bellew fight was seen in that way by a lot of fans.

Moving up to the heavyweight division to spar with bigger and stronger fighters could take a toll on the body of Usyk. He’s used to fighting guys in the 200-pound range. Now suddenly Usyk will be fighting guys that weight over 240 pounds, hit harder with every punch than the fighters that he’s been facing during his career. Even training with fighters that weigh in the 240s is going to be tough on Usyk. If his body can’t handle being in the ring with fighters that big, he’s not going to be able to stay healthy for long. Evander Holyfield made the transition from cruiserweight to heavyweight in the 1980s, but he was a more dominating fighter at cruiserweight with better power than Usyk. Holyfield was a force at cruiserweight. In contrast, Usyk has more of a finesse level fighter, barely beating the likes of Mairis Briedis, and not always looking entertaining. It’s going to be a lot harder for Usyk to transition to heavyweight than it was for Holyfield, because he’s not that kind of a talent. Holyfield was on another level completely compared to Usyk when he moved up to heavyweight. But even with Holyfield, he was never able to handle the bigger heavyweights like Lennox Lewis and Riddick Bowe.


« Flanagan, Fielding, Murray & Dickens back in action in Liverpool on July 12