Pacquiao vs. Thurman: Keith hoping for one million PPV buys 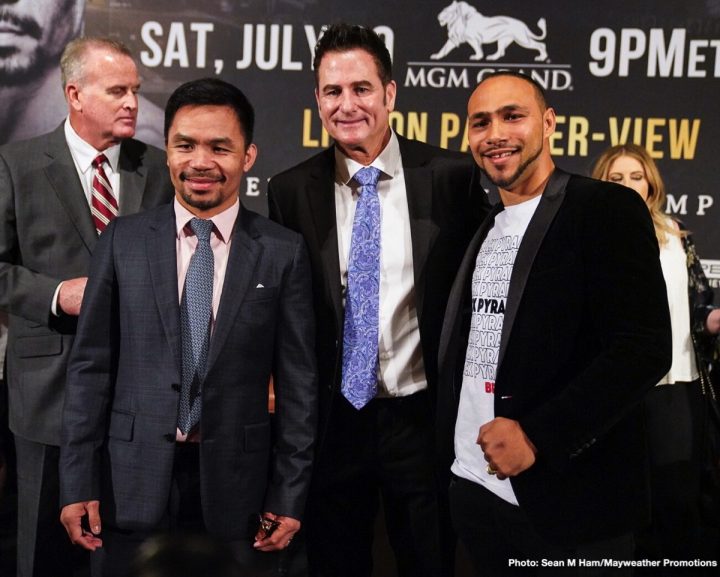 By Jeff Aranow: Keith ‘One Time’ Thurman is hoping that his fight with Manny Pacquiao will pull in one million pay-per-view buys on Fox Sports PPV on July 20th. Thurman (29-0, 22 KOs) points out that his comeback fight earlier this year against Josesito Lopez on January 26 brought in three million viewers on Fox Sports from the Barclays Center in New York.

Thurman (29-0, 22 KOs) reasons that if one-third of those fans are willing to pay to see him battle it out with the 40-year-old Pacquiao (61-7-2, 39 KOs) on July 20, then the fight will do one million buys on Fox Sports pay-per-view. Pacquiao vs. Thurman will be taking place at the MGM Grand Arena in Las Vegas, Nevada.

“Did you check the books. You live in Vegas,” Thurman said to Porter when told by him he’s the B-side for the Pacquiao fight. ”I’m not the B-side, baby. Whose title is on the line? Who’s title are we fight for? Manny Pacquiao and his legacy is definitely going to be the anchor for this fight. But even against Josesito Lopez, 22 months out of the ring, on this beautiful Fox network, I had three million viewers tune in to my comeback. If one-third of these viewers attack themselves to his pay-per-view, I’ll be honored,” Thurman said.

Considering that Thurman has never fought on pay-per-view before, and he’s fighting a guy that a lot of boxing fans see as washed up in 40-year-old Pacquiao, it would be surprising if their match brings in one million pay-per-view buys on Fox Sports on July 20. It’s not impossible obviously for the Pacquiao-Thurman fight to bring in those kinds of numbers. The Filipino star still has a lot of boxing fans that are out there somewhere, and might be willing to pay to see him fight Thurman in large number. It was only four years ago that Pacquiao’s fight with Floyd Mayweather Jr. brought in a record-breaking 4.6 million PPV buys in the ‘Fight of the Century’ on May 2, 2015. However, the fight was dull, the undercard dreadfully poor, and the event disappointing. The high coast of ordering the fight, which went for $100 per household on PPV, angered a lot of boxing fans, many of them vowing never to purchase another fight again. In the aftermath of the fight, Pacquiao’s PPV numbers dropped off the side of the cliff and were never the same. Mayweather was able to still bring in 4 million buys in his fight against MMA fighter Conor McGregor in August 2017.

The difference is that the three million viewers for Thurman’s fight with fringe contender Lopez was on regular non-PPV Fox Sports, so the fans didn’t have to pay to see those two. It’s a lot different now with Thurman and Pacquiao asking the boxing public to pay $70 to see them face each other, given that neither of them are considered to be the top fighter in the 147 pound division. Moreover, the undercard for the Pacquiao-Thurman card is lacking in a huge fight. These are the two fights are on the televised portion of the Fox Sports PPV card on July 20:

In the non-PPV portion of the Fox card, IBF super middleweight champion Caleb Plant is facing light heavyweight fringe contender Mike Lee. The interest in this fight has been nonexistent. The boxing public isn’t interested in seeing Plant fight a fringe contender from the 175-pound weight class. They want to see him fight a good opponent like David Benavidez, Callum Smith or Saul Canelo Alvarez. Dmitry Bivol would be perfect for Plant to fight, but of course his management at Premier Boxing Champions would likely never make that fight, because he would probably lose badly to the Russian talent.

”I always felt I could beat him at anytime throughout my career,” Thurman said to Inside PBC Boxing about Pacquiao. ”I just feel that Pacquiao’s style is great for my boxing style. I feel like I can dismantle his spurts. He kind of fights in spurts, and for me he’s a very basic style of boxing. I had over 100 amateur fights, 29-0 with 22 knockouts. I’ve seen it all, and for me, Manny is a basic great fighter. Josesito Lopez actually brought something to the table that I haven’t had to deal with in a long time, and that’s a reach advantage on me. Shawn Porter, I had a small reach advantage on him. I had a small reach advantage over Danny Garcia. I’m going to have an even greater reach advantage over Manny Pacquiao. as when I was on the outside in my past fights, I ended up getting caught with the long arms. Manny Pacquiao is not going to be able to catch me. I call him, ‘T-Rex arms,’ Manny Pacquiao. His arms are too, they’re tucked in here. They’re too short. That’s why Manny Pacquiao jumps in, and he jumps in to commit and it only takes that one moment to catch him trying to connect with me. I connect with him and we go home early,” Thurman said.

According to Thurman, Pacquiao lacks the reach to get to him, and he’s going to be looking to nail him with big shots when he dives in to try and land his power shots. Juan Manuel Marquez was able to time Pacquiao and knock him out with a right hand in the sixth round in 2012. Marquez is the only one in recent years that has been able to knockout Pacquiao. Before Pacquiao’s loss to Marquez, his previous stoppage loss came in 1999 in a third round defeat at the hands of Boonsai Sangsurat. In 1996, Rustico Torrecampo knocked out Pacquiao in the third round. Those defeats came early in Pacquiao’s career before he learned his trade and made improvements in his game. It’s possible that Thurman could knockout Pacquiao, but not likely. Thurman fights scared, and often looks like his mind is set on making a quick get away after he throws a shot. He can’t fight like that against Pacquiao if wants to try and knock him out.

The boxing public is going to expect Thurman to fight the elite level welterweights if he gets passed Pacquiao. Shawn Porter and Danny Garcia are both low lying fruit for Thurman to pick. The fans want to see Thurman fight Errol Spence Jr. or Terence Crawford. Danny Garcia has lost two out of his last four fights, so there’s less interest from fans in seeing Thurman fight him again. Thurman already beat Garcia in 2017 by a 12 round split decision. Garcia’s only wins in the last two years have come against Adrian Granados and Brandon Rios. Porter is coming off of a controversial win over Yordenis Ugas last March, which many boxing fans felt was a robbery.

“I just think this is the perfect fight at this moment for me at this stage, and to really take off all the rust that was needed to be the #1 welterweight in the world,” Thurman said.

A win for Thurman over Pacquiao won’t bring him back to the point where boxing fans will see him as the #1 welterweight in the world. Thurman will need to get over his fear of Spence and Crawford, and take those challenges if he wants to be seen as the best fighter in the 147-pound division. He can’t get to that level if he fights old guys like Pacquiao and 34-year-old Josesito Lopez. Thurman seems like he wants to fight the secondary guys, and then brag to the fans that he’s the best.